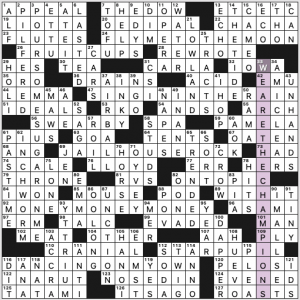 Neat theme, but it might have been nice to have more representation among the musical artists featured. Robyn and half of ABBA are women, Queen’s Freddie Mercury was Asian, and I think everyone else included is a white man. Bonus points for any suggested song/artist combos that fit the “___ bars” clues and are more broadly representative.

Did not know: 31a. “Top Chef” chef ___ Hall], CARLA. She was a contestant in two seasons about a decade ago. I call foul on cluing a reality competition contestant as such, outside of the more high-profile ones like people who became famous from American Idol. (Top Chef judges often appear year after year, and on multiple cooking shows—and they’re still marginally at the level of “can expect solvers to know the names.”) Hall has cohosted The Chew, which would be a better clue avenue.

Fave fill: FRUIT CUPS, LLOYD Austin and JEN Psaki (today’s current events quiz!), STAR PUPIL, INCHWORM, AIRBALL, OY VEY. Not keen on AS AM I, THE TIDE, OATEN, and a few other entries that are now eluding my eye.

3.5 stars from me. Enjoy the rest of the weekend!

Unless I’m missing something, the theme of this puzzle is ING marching across the grid. Not my favorite kind of theme. 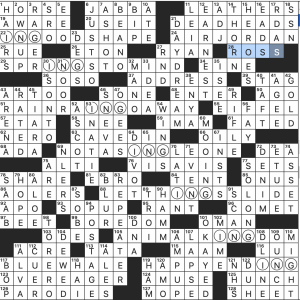 I see that the strING also marches through the answers as well as through the grid. I guess that makes it a feat of construction. It did not make it fun to solve.

Dupes appear to be a feature of the LAT these days, not a bug. 1d is [Clues for DNA analysis] and 100d is [ ___ kit: Ancestry.com item] which is, of course, DNA. There are a lot of other ways to clue HAIRS, which is the answer to 1d. You could even use the clue idea and not mention DNA. If, that is, you cared about dupes.

Time to get ready to go to the glass studio and make pretty beads so I’ll skip right to “what I didn’t know before I did this puzzle.” I don’t follow racing so [1983 Indy 500 champ Tom] SNEVA is knew to me.

Here’s a puzzle you’ll need an Answer Key for :)

THEME: The names of keys on a typist’s keyboard are inserted into common phrases, and wackiness ensues. 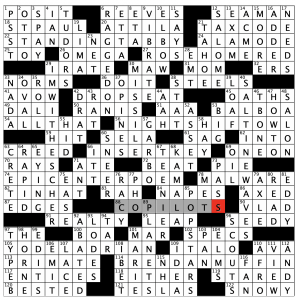 Fun! I 100% needed the revealer as I had no clue what was going on. I’m glad it was in the center of the puzzle for this one. In this case, I found it more enjoyable to find the keys in each answer during the solve rather than afterward. Home, Alt, Enter, and End are not on my mac. I know Return is the equivalent of Enter. I’m not sure about the others. I don’t much use the Control key on my Mac… is that like Alt?

Big nods to Rocky in this puzzle with the title character’s surname, his nemesis, and his catchphrase (as the base of a themer) all making appearances!

Really liked the clever repeated clue for POP STARS and PLANETS [Mercury and Mars, e.g.], especially with those entries being so close to one another.

Stumbles for me included SALAME for SALOME (which made ROSE HAMERED as a themer very difficult to interpret, but somehow I accepted it as correct), and COPILOGS for COPILOTS. The G was a typo when I meant to enter MET, but later when I was checking the crossings, MEG looked perfectly fine in the grid. And I figured COPILOGS was pronounced COP-E-LOGS and was some sort of book used to log altitudes in the cockpit. This is where my mind goes to justify something that looks completely kooky. Did I mention I’m the son of a pilot?

If I had one nit, it’s with the themer NIGHTSHIFT OWL. SHIFT really sticks out there and isn’t even close to buried as, say, ALT is in SALTINE WAVES. Also, NIGHT OWL doesn’t really change definition much when it’s altered to the new phrase. On the other hand, I uncovered that one right before the revealer and it aided in a clear-as-a-bell AHA for me without having to pause much.

Got through this one rather quickly and it was a very pleasant start to the day.

Hope it treated you just as well. Enjoy Sunday! 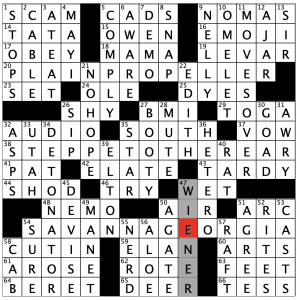 Excellent finds all around! I really like three solid (and long) themers in a puzzle. Anything more in this one would’ve been a disservice.

Not sure if PLANE PROPELLER is something that people say, but it works well enough and it’s a balancer for the excellent SAVANNA GEORGIA.(too bad PLANE / PLAIN GEOMETRY is only one letter shy!)

Fill felt very standard for me. Nothing much else to say!

Theme: Well-known phrases that have a word starting with DE have that bigram removed resulting in crossword wackiness. 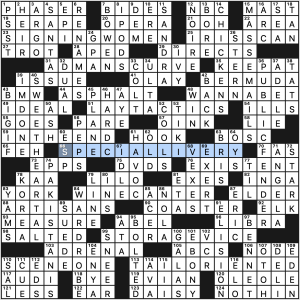 Solid and mostly good. And really, that’s a lot of theme material, even for a 21x grid. And somehow everything’s placed in such a way such that no themers are crossing thereby freeing the grid from added restrictions.

Thus, even with all those theme entries, there’s still a goodly amount of strong non-theme fill, such as IRIS SCAN, BERMUDA, “WANNA BET?”, IN THE END, ARTISANS, SCENE ONE, CHICKENS, MASS EMAILS, “I’M DONE,” PAKISTANIS, and WARDROBE. I didn’t spot anything iffy at all in the fill, only the occasional proper name I didn’t know.