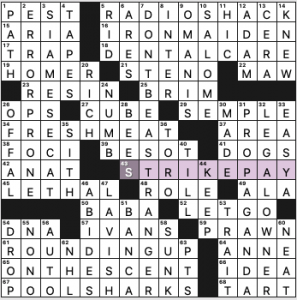 It’s a holiday and we want to start watching the Get Back documentary, so super-quick summation. Liked it a good bit, didn’t love it. Standard Friday difficulty. Fave fill: IRON MAIDEN, FRESH MEAT, STRIKE PAY, ON THE SCENT, POOL SHARKS (great clue, 67a. [Experts in English?], as in using body English to sink balls on a pool table), SIAMESE CAT, “DON’T BE A STRANGER.” Less fun: STENO, IVANS.

Theme: The first word in each theme answer can be put before STAND. They are also all Down answers, suggesting that they are standing. 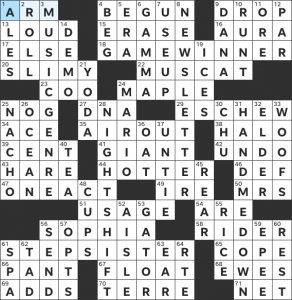 I tend to enjoy themes in which the answers are all the results of Down clues. I don’t see them as often, which always makes me go through a silly routine of “Oh, could it be? Oh, yup, Down answers are my focus here.” It’s especially appropriate for me that Claire did this puzzle, since the first Downs-only puzzle I ever did was one of theirs that I accidentally stumbled into one day in August (you can solve that here, if you’d like). That aside, I thought that this was a clean theme with fun answers, and four themers also always feels like we’re getting a bonus on the USA Today puzzles.

Grid-wise, we’ve got this nice diagonal shape pattern running through the puzzle, beginning with 1a [“Biceps’ place”] ARM and moving all the way down and right to our final Across answer, 71a [“Badminton divider”] NET. We also have some nice five-letter answers and the two tens I thought were theme answers for a second, with GAME WINNER and STEP SISTER.

Great Friday puzzle! Definitely go check out that Downs-only one I mention above. 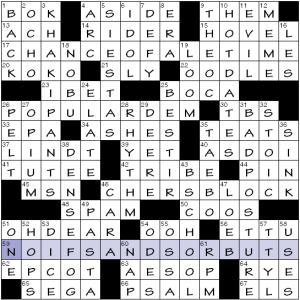 Very neat theme. Obvious in retrospect, and probably done before, though I don’t recall seeing it. (Quick search indicates that Evan Birnholz did it in a 2018 Sunday WaPo.)

So those are fun.

As I said, a fun and interesting crossword, even though it turns out not to be completely original.

Theme entries are familiar phrases that include ME somewhere inside, but the clues only make sense when ME is removed. The revealer at 58a is DON’T MIND ME [“Pretend I’m not here,” or advice for reading the starred clues’ answers].

I enjoyed this. I was suitably befuddled at first trying to make sense of that first entry before the penny dropped and I had a pleasant aha moment. The revealer is perfectly apt as is the title. Well done.

Fill highlights include MS. PAC-MAN, AQUARIUM, and “C’MON, MAN!” The stacks of 7s in the corners are more workmanlike, but they get the job done.

An enjoyable puzzle. Four stars. Oh, and this is a debut! Congrats on a great start! 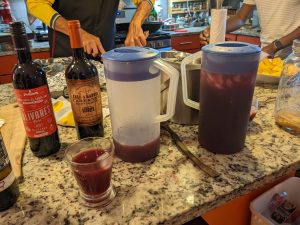 Hey besties, and Happy Morning After Thanksgiving to all those who celebrate! I had a brownie and a slice of cheesecake for breakfast, which I wish I could do every day. My family does not make traditional Thanksgiving food, but we do make the same things every year– Persian-style lamb, zillions of roasted vegetables, sangria, and key lime pie, among other things. For the second year in a row, I am grateful for the Crossworld pals I’ve made and the opportunities I’ve been lucky to have. It’s still crazy to me that after only two years I am allowed to write reviews that people who have been solving for twenty years will read. 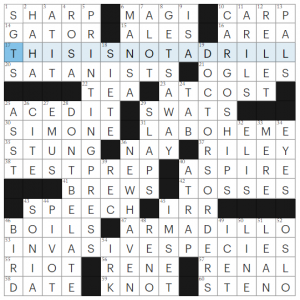 Today’s New Yorker puzzle was super breezy, standard Robyn Fare. There were a few pieces of fill that I didn’t care for– IRR, RENAL (a word I learned from crosswords), RELET (seems like an arbitrary “re-“), ELIS (plural names are very meh for me), and A TRAP (kind of a long partial). All of these benefited from my favorite trick, which is making the clues super easy, so that you can just plug in the answer and move on. Please do not ever give me tricky, tough clues for uncommon abbreviations or contrived plurals!!

My other small beef was with the fill-in-the-blank clue for “gal PALS” which described the term as a friend group. To me, the term has evolved beyond that, and has become a term which the media uses to mis-identify lesbian partners as friends. Read more here.

Anyway, on to the good stuff– and there was a lot! Bullets below.