Theme: Synonyms for “talk” are squeezed into single squares and marked with a circle. The revealer is SMALL TALK (36a, [Party pleasantries, and a hint to this puzzle’s “bubbles”]). 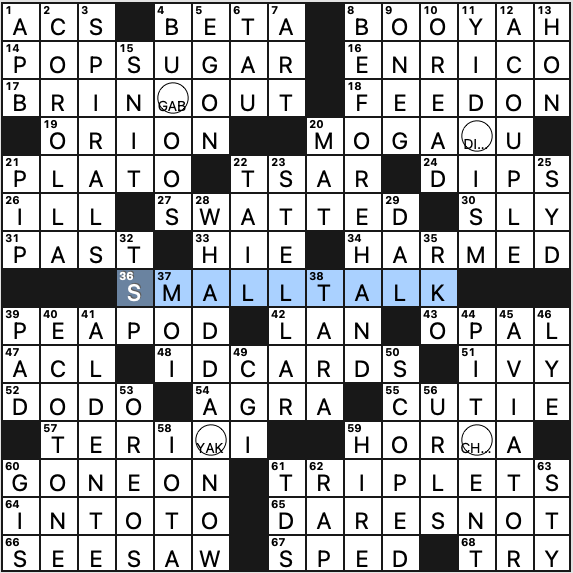 Very nice, eh? I like that there’s a different rebused word in each entry, and the title is spot on. For the most part, the choice of entries are fun and challenging in their own way and there’s a definite international feel among them. It’s not often we see a rebus puzzle in the Journal, so this was a pleasant surprise.

I must protest the spelling of WHADDA YA KNOW though. I’m sure there’s no one correct way, but I’m partial to “Whaddya know.” The NPR quiz game show is possibly the closest we’ll come to an official version, and they spell it “Whad’ya Know.” But the entry in the grid looks weird to me with that extra A.

What’s in the fill? Quite a lot to chew on. Let’s see…I didn’t know POP SUGAR [Female lifestyle website], but you can check it out here if you don’t already know it. BOOYAH is always fun, and I liked COROLLA, AL DENTE, TRIPLETS, SEESAW, and DARES NOT. I’m not sure A COUPLE makes for legit crossword fill. What say you? Hadn’t heard of ECOTONE [Transition area between two biological communities] which sure looked like it wanted to be ECOZONE. Some old crosswordese shows up in OREAD, EGON, and HIE. And GONE ON is straight-up glue holding things together in the SW.

A few minuses in the fill but plenty of pluses as well. Overall, a well conceived and executed rebus theme. Four stars. 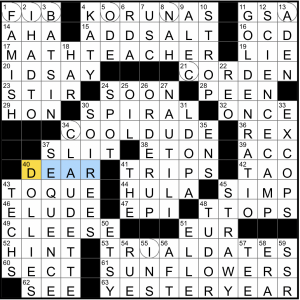 We’ve got circled squares in today’s grid from Adam Wagner, but they’re a bit irregular in their occurrence.  Once the grid is filled in, it makes solving the related clues easier, though you may have been on this one’s wavelength well beforehand (like I was) and filled them in with FIBONACCI right away.

This is a fun, math-y theme that was right on my wavelength as soon as I noticed the spiral in the middle of the grid.  In fact, today’s grid reminded me of Robert Smithson’s Spiral Jetty.  I kind of wish there was a little more going on with the theme – the circled squares using Fibonacci is nice, but this feels like it needed one more aha, though I’m not sure what that would have been.

I found this one harder than the most recent themed Fireball puzzles I’ve done. I figured out the theme and solved the puzzle correctly and had absolutely no idea what one of the theme answers meant.

The theme answers are paired and cross-referenced, like so: [9-Down, for one]. We need to take that literally. 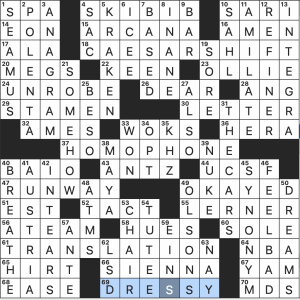 This is a fun theme with a very satisfying “aha!” moment. I would have enjoyed the puzzle a lot more without the CAESAR SHIFT. I know what ROT13 is, have never heard the more general term for that type of encryption, and I don’t feel particularly enlightened by the knowledge. It feels like inside baseball to me – if you know, you know, and if you don’t, too bad, because it’s not inferrable.

What I didn’t know before I did this puzzle: see above re: CAESAR SHIFT. I also did not know that Al HIRT recorded a song called Java, although when I pulled it up I realized I know the tune: 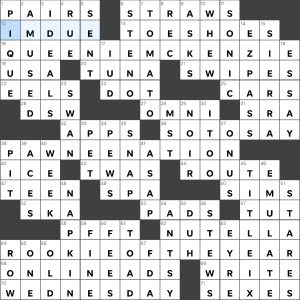 Theme: each themer phrase begins with a type of chess piece

Today’s theme is subtly hinted at chess in the title “Ahoy Mate-y”, if you didn’t get misdirected to think of sailing and pirates like I did. QUEENIEMCKENZIE was an aboriginal painter with evocative works of art. PAWNEENATION is located in Oklahoma and recently named a new Executive Director, Jenifer Gover LittleSun. ROOKIEOFTHEYEAR for WMBA 2021 was nearly a unanimous vote and Onyenwere is the first New York Liberty player with the honor. The crossing for the themers in particular were very fair, I found, so no matter what you knew, these were all fairly easy to fill.

Favorite fill: OMNI, EMULATES, and NAPKIN (got me craving hot wings too!)

Stumpers: IMDUE (needing crossings), TUNA (first instinct was “fish”), and WHEW (usually think of as “phew” but luckily I had the crossing 6a STRAWS already filled in so had the first letter anyway)

I zoomed through today’s puzzle and while not quite a p.r., it was close. The gird itself had me wondering for a moment if there were additional themers in the SW corner especially with those bonus fill, though there were many others as well throughout. Very enjoyable!

Faves: DON’T MIND ME, TEHRAN, IS THIS THING ON (which I dropped in with no crosses, please clap), the reference to meat-and-three (the answer for me is fries, mac and cheese, and dirty rice, although that’s assuming cornbread is included), HONEST TO GOD, MING DYNASTY. 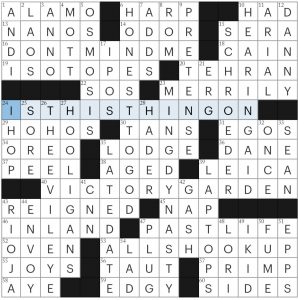 Least faves: Spent half my time on that bottom right corner, between two people I’d never heard of (LORI Petty and Omar EPPS) and “past self” for PAST LIFE and not knowing whether it was PRIMP or “preen.” I think “evil eye” works better than THE EVIL EYE. The clue on LATE DATE (Rhyming phrase that means “time shortly before an impending deadline”) felt needlessly confusing… I would have gone with something like [10pm drinks, say].

Other: Toffee Crunch OREOs sound sooo good. I am watching Bill HADER in Barry right now and wow it is so good and so terrifying.

THEME: Things that are yellow can be found when the beginning and end of common phrases are combined. 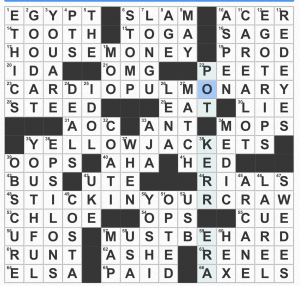 This one was a rough solve for me. I mean, anytime I am in a position where I have to use the truly terrible webapp that Universal embraces (which cannot employ circles around letters when the theme calls for it, and offers solvers a truly terrible “workaround” by asking them to count and mentally circle their own letters. Go figure…), a five star puzzle can still be an unenjoyable experience. The lagging, loud, and oddly dated “click” sound effect as you type letters is about the most obnoxious feature of the software which doesn’t seem to have been updated since crosswords first started appearing online. The fact that entire rows/columns are highlighted when you are entering a single entry (depending on where in the puzzle you are) is befuddling as well. I’m truly stunned that they are still going strong with this software and boasting that they “…set the standard for all daily crosswords” (per its own website).

Trying to put that aside (which has nothing to do with the construction), it wasn’t my favorite solve in recent memory. I like the theme itself and the revealer, but I don’t think of either HONEY or STRAW as yellow in reality (in children’s books, yes). Both are more golden to me. CARDIOPULMONARY doesn’t thrill me as a base phrase, and it feels like it’s clued as a partial [First parts of CPR?]. I had an I for the second O which made the crossing very difficult for me because the crossing clue was rather vague [Cookware item]. When spelling of a term that people don’t use often may be difficult for some, I would prefer a more direct clue crossing.

Lots of new names for me in this one. Like… lots. Holly Robinson PEETE, LENA Waithe, KERR (with a great clue though… [Warriors coach found in “locker rooms”]), AJA Wilson, RENEE Elise Goldsberry (whom I really should know as a Tony winner for The Color Purple and a star in Rent and Hamilton. I saw her in all three of those), CHLOE Zhao, to name some, among a bunch of other, more familiar names. ELSA, ASHE, IDA, etc. Felt very proper noun heavy for a 15x, or maybe it just seemed that way with the names that weren’t familiar to me.

Liked the entry EGO TRIPS! Especially as clued with the alliterative and clever [Vain “voyages”]. Nothing much else sticks out for me. Wasn’t a fan of the long partials YOU ARE and GOOD AT adjacent to one another.

So again, not my favorite solve, and definitely hindered by Universal’s webapp. Is there another publication out there currently offering two different versions of its puzzle? One for the masses and a “secret version” which is published as the constructor intended but is only available at this website?

This is a guest puzzle on BEQ’s blog from Quiara Vasquez. BEQ will release one of his own tomorrow.

Theme: Each answer has a 5 replacing IT within the answer, putting 5 on IT. Each theme answer is also cut across by an answer that naturally has a 5 in it. 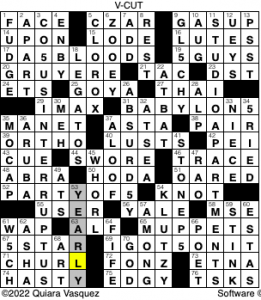 Revealer: 69a [“Bay Area hip-hop classic prominently featured in the film ‘Us’…or what this puzzle might say about its down answers”] I GOT 5 ON IT

I lowkey love when numbers sneak into puzzles, which is ironic considering that I’m not typically good with numbers. It took me a bit to realize that this was the case, but I knew something was up when I was filling in GLITCHY. I think I would’ve figured it out more quickly if my brain would have supplied DA 5 BLOODS faster for 17a [“Spike Lee film whose characters are named after the Temptations”]. CO5US INTERRUPTUS was a great grid spanner, as was its symmetrical partner in STUDIO APARTMENTS for 11d [“Artists’ pads (nominally, anyway)”].

A few clues I particularly enjoyed include: 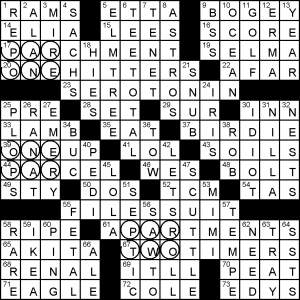 Ashleigh Silveira’s puzzle theme is quite intricate, and difficult to explain in words; three of the more quirky names for golf scores – EAGLE, BIRDIE and BOGEY, are expressed visually as PAR/TWO (“two under par”), PAR/ONE (“one under par”) and ONE/PAR (“one over par”) within longer grid entries.

Unusually for a 15x, this grid design features 80 answers, two more than the traditional maximum of 78, but I’m sure it hardly stuck out to most solvers – what sticks out more is awkward contrived answers. That said, the 5×3 step stair in the centre was certainly an unusual choice!