Attention, fans of tough crosswords who are always looking for a fresh challenge! Andrew Ries has a new puzzle pack of variety crosswords in the Twists & Turns format he devised. Each “Twists” answer is 9 letters long and it’s up to you to figure out whether it starts or ends in the center, and if it ends there, where it starts. The “Turns” answers follow a path back and forth through the grid as you travel down, so you can use those words to help you figure out how the “Twists” are to be entered. Visit Aries Puzzles for more info and to buy the packet, which includes eight mini T&T puzzles (four 3×3 chunks in each grid) along with eight big T&T puzzles (25 3×3 chunks). Enjoy! 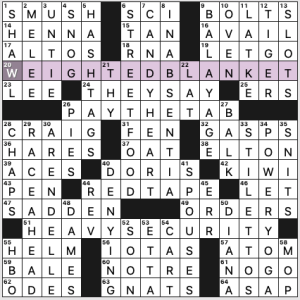 Bit of a mini-theme in this themeless with left/right symmetry:

Other fave fill: SMUSH, DORIS Burke, Frozen‘s ARENDELLE, HASHTAGS (great clue: [Pounds on keyboards?]), STREET FOOD, CANDY HEART, BALAYAGE (this is the technique my colorist has used on me in recent years), and POWER YOGA.

Welcome Frannie Comstock to Constructor Land with her debut! I agreed with the Inkubator editors that this was a “lightly challenging” puzzle and I enjoyed it.

I was looking for theme answers in the Across entries and didn’t see a connection because it turns out that’s not where they are. 27d tells the tail: [Inverted yoga position, familiarly…and a description of six answers in this grid] is DOWN DOG. I am not a yoga practitioner so I’ll leave it to someone else to say whether it’s common to shorten DOWNWARD to DOWN in the name of this particular asana. There are indeed six DOGs going DOWN in the grid. 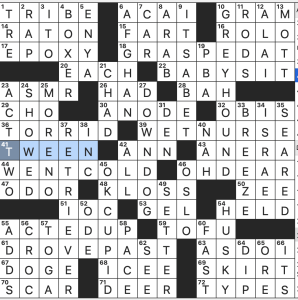 All dogs! All going down! A solid theme I don’t remember seeing before.

What I didn’t know before I did this puzzle: never heard of the BOXER Lucia Rijker. Didn’t know that Main Ingredient covered “Summer BREEZE.” Never saw “Despicable Me” and so didn’t know Margo was a TWEEN.

The revealer is GOOGLE DRIVE (56a, [Cloud storage option whose apps are featured at the ends of the starred clues’ answers]. The other theme answers are familiar phrases whose last words are also Google products. 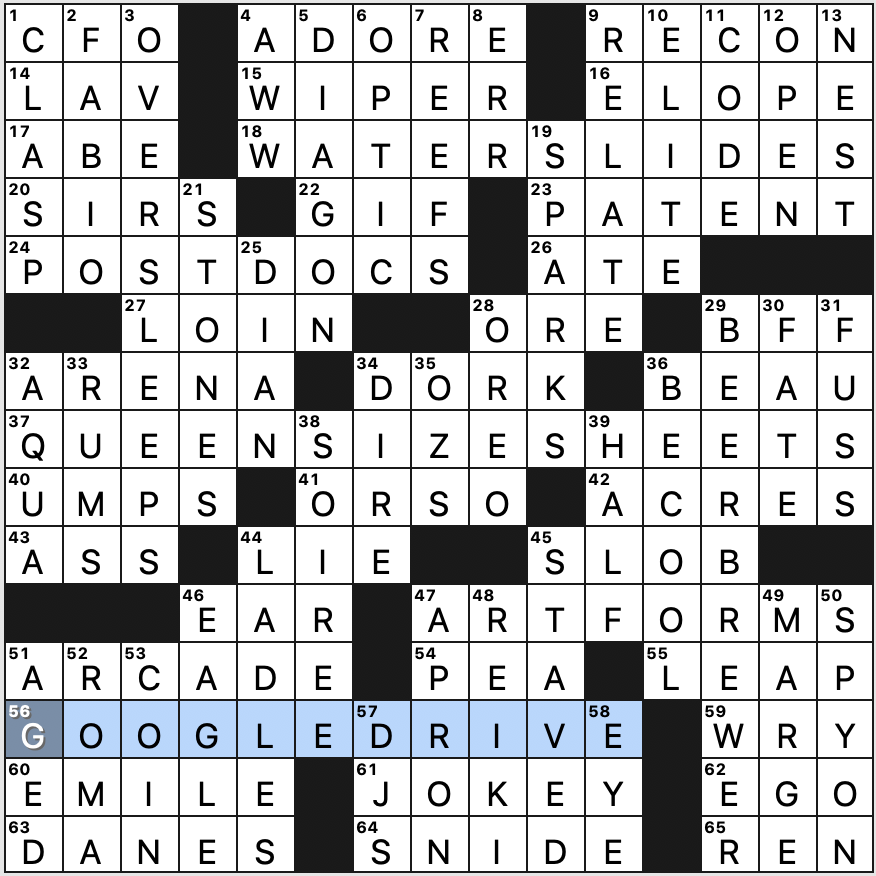 Straightforward enough, though I don’t think I’m terribly keen on a puzzle touting one particular company’s products. There was a time when crosswords didn’t have any product placement at all. But it’s just a puzzle. Maybe Google can link to it on their main web site. Here’s an interesting discussion (from non-constructors) about whether or not they believe there’s product placement in the NYT.

Elsewhere, OVERSLEEPS and BEER BREWER top the fill. In my mind I enjoyed putting the two entries “BE COOL” and DORK together. DIAGON Alley might be tough for the non-Harry Potter crowd, but crossings are fair. Similarly, I’d never heard of REIKI [Japanese energy healing], but again, the crossings help out, especially the fun word JOKEY.

If you’re one who frowns on product placement in your puzzle, best to just skip this one. Otherwise, it’s a solid grid. 3.25 stars. 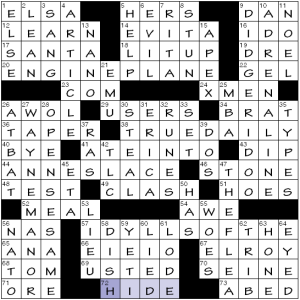 There’s a lot to like here. The base phrases are all strong. The beds (don’t) appear in size order and alternate positions from front to back. Very nice stuff. Turboprops to the constructor!

I’m not sure that the L shapes in the black blocks have any import. I suspect they’re merely artifacts of being unable to find longer across answers for the top left and lower right. On the other hand, there are stacked vertical tens in top right and lower left: DIDGERIDOO, ADRENALINE and WAYNE MANOR, OPEN SESAME. More fine fill.

Theme: Each theme answer includes an anagram of the word BEATS. 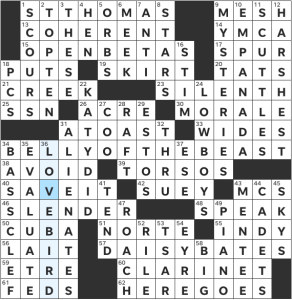 I love these theme answers! OPEN BETAS was really easy to fill in, and I got BELLY OF THE BEAST mostly on the crosses, though it was pretty intuitive once I had about half of the letters. I got DAISY entirely on the crosses and somehow managed to pull BATES from the deepest recesses of my mind (more on her below).

In general, this puzzle was awesome. I loved the wide open corners. It was so much fun to fill in MYSTERIES, EMPANADA, SCUTTLES, BASS CLEF, and EVALUATE. In the middle, A TOAST threw me off because of the A.

Overall, this was such a fun puzzle and a great end to the week! 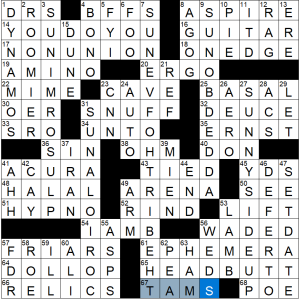 Tom McCoy! There’s a name I haven’t seen on a puzzle in some time. Tom is the constructor for one of my favorite puzzles ever, which I won’t spoil, but will link here (.pdf only, for reasons that will become clear).

Today’s puzzle is a step up (edit: in difficulty — whoops) from most New Yorker Friday’s to date, both in theme and fill, in my opinion. Let’s dig into the theme and its answers moving in an unexpected direction:

I … did not pick up on this theme quickly. I recognized quickly that PLUS OR MINUS was the answer and deliberately running reverse, but I was slow to see CORIOLANUS, which I haven’t read or seen performed, and then I was trying to see how the long central themer would function as a revealer. All this is to say, I had a few nice aha moments, and then a bit of a head slap when I finally realized quite why everything was upside-down. In retrospect, it’s obvious, but the grid design helped disguise it for a while, which made the experience more enjoyable for me.

YOU DO YOU [14a Tautological encouragement of self-expression] is a lovely highlight in the fill — it’s possible this is the first time I’ve seen this in a published puzzle? Perhaps not, but nothing is ringing a bell right now. Cluing GUITAR to Maybelle Carter and OER to The Who’s “Quadrophenia” instead of The Star Spangled Banner were also highlights for me. Not a whole lot else in the fill jumped out during the solve, but the journey through the grid and theme was so satisfying, I didn’t mind much. The middle three themers do a great job of keeping the grid connected while managing the potential for gluey fill in the middle.

Cheers! Have a great weekend!