(1) Happy birthday to our fearless leader, Amy Reynaldo! I had my first guest stint on this blog last year at this time, and it’s an honor to cover for her again this year as she once more celebrates her 29th birthday.  Amy, I know I speak for all the Little Fiends in wishing you another year of health and happiness and thanking you for your extraordinary devotion to this craft.

(2) The CHE puzzle did come out (later) on Friday after all, so the Friday post has been updated to include it.

(3) Amy returns tomorrow, as I’m too scared to cover the Monday puzzles.

Daniel C. Bryant’s New York Times Crossword, “Is There an Echo in Here?” Daniel C. Bryant is back with his first NYT puzzle in nearly two years.  The seven theme entries phonetically repeat the last word of certain phrases, and the clues assume the “echoed” phrases are actual terms.

I thought the fill had plenty of highs and lows. On the high side: GAY PRIDE, the [Annual parade subject]; SPINDLIER, clued [More thin and frail]; UNLEARNT, as in [Not yet acquired, as knowledge]; RASSLER, slang for a professional wrestler, like [Hulk Hogan or Andre the Giant]; DAY ONE, clued as [The beginning]; AT LUNCH; AS OF NOW; and NOT QUITE. On the low side: a northeast corner with SRTAS, SSSSS, and the awkward plural NOLOS (any one of which in isolation is forgivable, but as a trio it’s fugly); DICTS, the [Library shelfful] abbreviation for dictionaries; another awkward plural in ROTCS; NAMABLE, a legit but rarely used term; and various other abbreviations like IRT, PHYS, ENTOM, SCH, and ISR.

Some of my favorite clues included [Sitcom with three stars] for M*A*S*H, [Cream, e.g.] as a wonderful misdirect for TRIO, [Dom ___, “Inception” hero] as an about-as-contemporary-as-it-gets clue for COBB (I’m looking forward to seeing this movie on Tuesday), [Gently roast … or something thats’ roasted] for RIB, [Something that’s “Miss” titled?] for PAGEANT, and [What’s expensive in Paris?] for CHER. With her taste for the extravagant, I would have thought Cher is expensive everywhere.

There were a few tough nuts to crack here. Among them:

But nothing, nothing in this puzzle was as monstrously tough as the extreme northwest corner. It killed me. I had POD as the [Group of whales], but this grid wanted GAM. (Whales have killer legs?)  I held on to AWAY as the answer to [“Go ___!”], but it’s the much friendlier ON IN. And then there’s the confluence of four writers–my kryptonite. The [Hersey novel setting] is ADANO–which I suppose is easy if you know that John Hersey is the author of “A Bell for Adano.” If you don’t, well, these crossings aren’t exactly going to bail you out so easily.  I wonder how many others will go Google GOGOL (now there’s a tongue twister), the [Writer of the short story “The Overcoat”].  Gogol crosses the [Fin de siècle writer Pierre] LOTI. Hmm, I wonder when he wrote? One website describes his work thusly: “Loti’s fin-de-siècle readers were captivated by the blend of gentlemanly eroticism and fashionable melancholia that his books exuded.”  I can relate–my writing likewise exudes gentlemanly eroticism.  And Loti crosses PNIN, the [Vladimir Nabokov novel] about a random collection of letters. Holy Schnikes, what a corner! Merl adds an S to the end of a word in a well-known phrase and then clues the resulting absurdity. The puzzle’s title gives it away, but the twelve(!) theme entries are still enjoyable to unravel.

While the theme entries may be a little uneven, there’s no denying the prowess in squeezing 12 of them in this grid without overly compromising the fill.  In fact, the stacked sevens in the corner are quite nice, with EMPRESS and BOHEMIA in the northwest and ARNOLDS and CAGIEST in the southeast.  Merl normally relies on partials to make things fit, but there are only five in this grid, and all are perfectly fine by me.  Other highlights in the fill are GO FOR IT, LIGHT UP, and [Pitcher Jamie] MOYER, who I believe recently set the record for most home runs ever surrendered by a pitcher–a testament to his longevity. If you give up a lot of home runs, you usually don’t stay in the major leagues for very long.

About the only hesitation for me came in the far north, where NGO sits atop FALA, the [First Dog of the 1940s]. That made it a little tricky to uncover LEAVES, but not for long.  Today’s embarrassing confession: MOLT was the right answer to [Birds and snakes do it]. I wanted POOP. After all, everybody poops. Cox and Rathvon convert the first names of nine famous people into words meaning “home,” then clues each name as a “homey” (friend) of another as a hint to the celebrity’s identity.

I found the edges of the grid relatively easy, and the middle relatively tough. Most of my problem centered around PUEBLO CASALS and A-FRAME ZIMBALIST. (Anyone else now think of Patrick Berry when they see “A-frame house?”) This grid required the solver to know lots of proper names. I’m okay with names in my puzzles, so this didn’t freak me out.  But it felt like there were a disproportionately high number of people featured here: [Arthur’s sire] UTHER, Leslie CARON, Pat BENATAR, NICOL Williamson, AARON Neville, ILKA Chase, trumpeter Ray NANCE, Mario Vargas LLOSA, tennis player MARCOS Baghdatis, cager LATOYA Thomas, Archbishop EGAN, racer Rick MEARS, Ned BEATTY, and even the fictional Rick O’SHAY from last week’s Boston Globe puzzle.

The fill was generally fine, though DE-RAT, clued as [Free of vermin], is both gross fill and a gross image. I so wanted to cry foul on this one, but the Cruciverb database shows 23 prior uses of the word. May I add DE-ROACH to my word list? DE-ANT?

Continuing the long-standing tradition (okay, it’s the second week), let’s get a handle on my ignorance with this week’s Brushes With Lame (TM):

Final thoughts: [Site of the last Expos game] is a sad clue for SHEA (Stadium)–couldn’t Major League Baseball ensure that the last game ever played by the Expos would be held in Montreal?  [Hero in Philly] was a fun clue for HOAGIE, largely because my first thoughts were FRANKLIN and ROCKY. BASTE may not be the most exciting fill, but [Squirt juice over] is a lively clue indeed. Whenever I see Karen Tracey’s byline, I think three things: (1) there will be no partials and few abbreviations; (2) there will be a plethora of rare letters; and (3) there will be two or three names or places with which I will have NO familiarity AT ALL. For the most part, this puzzle fulfills these expectations.

There are no partials in the grid, but a fairly high number of abbreviations. LIC (for license), SRS (seniors), ANTH (anthology), SSA (Social Security Administration), N. MEX. (um, New Mexico), MSEC (millisecond), ETD (estimated time of departure), and SASE (self-addressed stamped envelope)–that’s eight in a 68-word grid–only 11% of the total entries, but that seems like more than normal.

We’ve got some rare letters, too, with a pair of Zs in the northeast corner, an X, a J, and a couple of Ks. To me the most impressive part of this contruction is having the two 14-letter entries partially stacked about double 9-letter entries, both instersecting a pair of stacked 10-letter entries. That feature may account for half of the aforementioned abbreviations, meaning they were the price to pay to get the elegant stacked entries.

And of course we have the “Huh?” entries, led by this puzzle’s white whale. It Who Shall Not Be Solved Without Crossings. Put the kids to bed–they shouldn’t see this at such a young age. Here it comes: ESBJERG! (Gesundheit.) The [Danish city near the Men at Sea monument] is a cacophony of consonants that look all kinds of wrong when smushed consecutively in the grid. I am tempted to cry foul, but won’t because all of the crossings were fair–yet even with all of the crossings in place I had zero confidence in my answer.

My toehold came at 11-Down with ZIRA, the [“Planet of the Apes” character played by Kim Hunter].  About all I remember from the original Planet of the Apes is Zira, Cornelius, and part of the Statue of Liberty (oops, should I have said “spoiler alert” there?).  The northeast corner thence fell quickly, and with SMASH in place I figured that the [Hollywood success] was BOX OFFICE SMASH. Soon the nothwest was complete too and it was off to the southwest. I got OMAHA, the [Texas hold’em alternative], without any help, and somehow pulled NIKON, the [Leica competitor], from the cobwebs inside my brain. Unsure that [Hamlet’s sister, in the comics] could be HONI, I left the corner alone to tackle the southeast, home of ESBJERG. That’s where the wheels almost came off.

Random observations about the fill and clues, organized by bullets to make them appear less random: Gia Christian anagrams to “It’s Rich Again,” so to give credit where it’s due, this puzzle was crafted by editor (and gentleman) Rich Norris. “Christian” drops the letter M from the start of one of the words in nine common phrases (thus knocking “em” dead) and clues that which remains.  See for yourself:

I like that four of the nine theme entries are in the Downs. I get that we’re trained to have most (usually all) of the theme entries in the Across position–probably because it’s easier on the eye. But I like to see it switched up once in a while with lots of theme answers in the Downs. Some of the better fill here includes MAKE ME, IN-BASKET situated next to MISH-MASH, IRANGATE, and IN A PINCH.

From the Good Clues Department: [Boss’s okays, often] is a nice clue for INITIALS, as is [Cars over the road] for ELS. The cars in question are railcars which run above the road in elevated rail systems. [Addition symbol] proved to be tricky clue for CARET.  Took me a while to catch on that editors use a caret to indicate where additional text is to be inserted in an manuscript.  I like how VULCAN is clued as [Spock, partly], since he is half-human after all.

I know the [Three-handed card game] SKAT only from crosswords. I have no idea how it’s played, and I know a fair number of card games. Is it fun? I never seem to remember LESAGE as the [“Gil Blas” novelist], but the crossings here made it easy. CANEM, the answer to [Cave ___: beware of the dog], “hounded” me for a while. I tried CANIS, CANIO, and CANEN first. Finally, when I saw [Hindu loincloth], I thought, “D’oh!” Turns out I was almost there: it’s DHOTI.

Okay, Amy, the conch is yours again. I hope you had a good time at Lollapuzzoola, and a pleasant stay in New York. And I hope your return flight wasn’t canceled this time. Finally a Bob Klahn puzzle that didn’t eat me for breakfast! I do have to wonder though if I’m getting more accustomed to his cluing style or this was just an easier “Sunday Challenge” than usual? We’ll have to see if a trend develops next time he’s up. 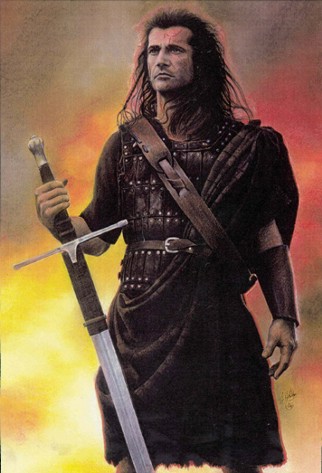 Mel has been having a rough go of it of late, he’s been dropped by his agency, and now has been named as a criminal defendant in a domestic violence suit. Oyvey! What would William Wallace do?

The ZEEs (or ZEDs, depending which side of the 49th parallel you take your puzzles) added quite a bit of spice–“Place to get hay from a kiosk” first made me think of an ATM machine (I believe “hay” can be slang for “money”), but it’s the real version that you could give to animals at a PETTING ZOO. Then I hope you didn’t “Fail miserably after starting well” when you came across FIZZLE OUT.

Other interesting entries include:

Hope this puzzle wasn’t a BEAR (“Toughie”) for you either…see you next week!