Time for another installment of T Campbell‘s “Callin’ Them Squares,” or “More Fun Than Crossword Taxonomy Probably Should Be.” Last time out, we were talking themelesses, and rubbing the term “themeless” in Matt Gaffney’s face. Undignified, really.

Thing is, just because you got no theme, doesn’t mean you got no category. With the caveat that there’s a lot of overlap, I see four major types of themeless: the Mies, the seed patch, the pudding, and the anything-goes. Is it possible to have a virtuosic, Miesesque grid in a themed puzzle? Of course, and we’ll discuss those in greater depth later. But in a true Mies, the grid is the only “theme” to be found.

Solvers, especially beginners, might not be able to say what it is about a certain puzzle grid that’s unusual. However, looking at a grid for as long as it takes to solve it means that most solvers will perceive the difference on some level.

The question is, will they care? 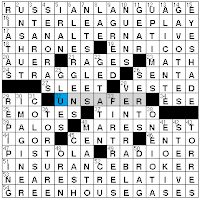 Kevin G. Der set the record for the lowest number of black squares in a 15×15 in 2008. His Mies had 18. That record has since been tied, but not broken. As the foremost record-keeper for such things, Jim Horne was one of this puzzle’s biggest boosters, but even he praised Der’s Mies in the negative, talking about how few words in the puzzle felt unnatural, although many of them were unusual if not unique to the New York Times.

Rex Parker was distinctly more nonplussed, citing the four plural proper names (SERTS, NUNNS, ENRICOS, TORRES) and three “odd jobs” (RADIOER, IMAGINER, STARER) that Der used as a bridge to his goal. “The fact that a grid is super difficult to pull off does not make the end result pleasing.” Reynaldo backed Parker up: “The black-square count does nothing to enhance a puzzle’s entertainment quotient.” Reviews of Joe Krozel’s record-tying puzzle, two years later, were middling. Brian Cimmet wrote, “It’s a monster. At least, to me it was. Perhaps you know all these things that aren’t really words and aren’t common names. It’s the crossings of things that aren’t really words and aren’t common names that result in Gaping Chasms of Ignorance for yours truly.” Reynaldo was only somewhat kinder: “In this 62-worder, there are some non-low-word-count-ish cool things and some ‘ehhh, no’ things.” Michele Humes found it relatively easy but noted that in a grid like this, “there are bound to be some compromises… some of the answers felt a little tenuous.” Of the reviewers I could find, only Horne showed unalloyed enthusiasm:

This one is quite doable and has some brilliant moments… Even if we don’t know it’s a record, we gasp at that ocean of white, and take a deep breath before diving in. This is how the state of the art advances. We see an impossible stack of 4 15s in the middle and someone responds with two quadruple stacks in one grid. Someone does a triple pangram and someone else responds with an outside-the-grid rebus. Not every experiment is worth trying but many are. Not every experiment succeeds, but some do, and some new gimmicks eventually become a standard part of the repertoire. It’s a fair point. But some science is mad science. Not every experiment is worth trying. Some involve things man wasn’t meant to do.

When I was making the Ubercross Fiddy, I was looking around to make sure I hadn’t hired a hunchback assistant. Reactions from crossword “outsiders” boiled down to those four words every guy loves to hear: “WOW! It’s so BIG!” Early reactions from those in the know were more… cautious. There had been other giant puzzles, their achievements tainted by the compromises they had to make: The World’s Largest Crossword Puzzle(TM) uses many uncrossed squares and repeat entries, while Robert Stilgenbauer’s earlier giant relies on obscura. These precedents began working in the Fiddy’s favor after the test-solving phase. David Blackwell called the Fiddy “recognized by many as the largest crossword puzzle available that is worth the effort.” But it’s terribly easy, whenever anyone goes for any kind of record, to serve an ambitious goal at the expense of perspective.

To be a Mies, a grid needs to be trickier to achieve than the standard models. But not every Mies needs a design that makes quality inherently difficult. This April’s “odd-numbered” Mies from David J.W. Simpson seemed to gather a positive response from Reynaldo, Ryan Hecht and the New York Times commenters. It may have helped that with its longest entries, it gives the trick away: EACH ANSWER HAS AN / ODD / NUMBER OF LETTERS. (One could argue these are “theme entries,” but since the single run-on entry here only describes the puzzle’s own architecture, I’d still group it with the themelesses.) Solvers have always appreciated cleverness more than brute force– especially the kind of cleverness that reveals itself to them as they solve, so they can feel like the cleverness is partly theirs. Parker had an acidly, hilariously dissenting view which is worth reprinting as a caution against the dangers of too much cleverness, or relying too heavily on any one gimmick:

Odd number of letters in each answer. Hmmm. Who. Cares? How does this feature increase my solving enjoyment? What does the this theme add, value-wise? Zero… “Hey, look what I made.” Yep, those are answers with odd numbers of letters, all right. Congratulations?

Mies van der Rohe has had his critics, too. While he was known for claiming “less is more,” Miesian critics would retort “Less is less.” And while his “form follows function” sounds like a virtue… whose function?

Themeless puzzles in most venues are expected to have a lower word count than themed puzzles, and the virtues of an “open” design are much-discussed. As long as it’s not too open, it can lead to a smoother solve and better vocabulary. Some Mieses are simply beautiful, and there’s nothing wrong with beauty.

But if you want to push the Mies in directions that it’s never, or rarely, gone before, and you want to make a solver happy, it’s usually best to be prudent as well as brave. Leave yourself enough room to make the puzzle good as well as remarkable. The hypothetical 17-black-square grid is a goal cited by several cruciverbalists, which Joe Krozel feels the need to make reality. Along the same lines, I’ve spoken about my dream to beat the size of The World’s Largest Crossword, without using uncrossed squares, repeat entries or obscura. But I have to be cautious, and Krozel should be, too. The definition of “obscura” gets woolly when you’re within finger-brushing distance of your goal, and you can only reach it by defining J.G. JONES as common knowledge.

Meanwhile, a simple smiley-face design might give more pleasure to the solver. And that’s what it all should be about.

Whew! Fittingly, this one ran very long. Next time out, we’ll focus on the seed patch themeless.

That would have been more appropriate for Thanksgiving weekend, but oh, well.

P.S.: Reader feedback convinced me to change this category name to the “Mies” from the “Gehry.”