Researching this piece, I asked Brendan Emmett Quigley how he built his themelesses. From the bottom, he told me– pick a neat bottom-right word, like HACK-A-SHAQ, then stack two more on top of it. Then do a similar stack from the top left, 1-Across first (SWEET JANE). Make sure the words next to your neat, preferred ones are nice and vowely (CLEOPATRA, CAMERA-SHY), fertile ground for the top left and bottom right entries to take root in. Pick two more neat words for the other two quadrants, but they don’t need quite as much emphasis as the entries you’ve already picked (IQ TEST, SNEEZE). Also, be Brendan Emmett Quigley.

(I may be paraphrasing slightly.) In the constructing biz, those neat words are known as seed entries. Quality seed entries start the puzzle off like a meteor shower and finish it off like a stampede of Ents. The more seeds you have, though, and the more uncommon letters are in them, the greater the probability you’ll need to use the word ENTS to finish your grid.

In other words, the chief virtue of a good seed patch crossword are its daring, sparkling entries, whose presence is ensured by early placement… when a grid is young and full of promise, before the compromises begin (oh, the compromises).

Its weakness is that all that planting almost always leads to a few weeds, especially if your seeds are numerous or exotic. In the puzzle above, Amy Reynaldo cites TRESS and the combination of OKS and DID OK, and there’s another “odd job” in DUELER. A worthy trade? I think so. But more to the point, some less-desirable words are usually a necessary price to pay for the show-stoppers. 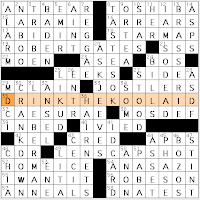 The puzzle in the accompanying image, another Quigley, uses a different configuration of seeds than the “stacking” approach he describes above. It appears to have six seed entries, very loosely interlinked and spread throughout the grid: DRINK THE KOOL-AID, ROBERT GATES, I’M SO DEAD, LENS CAP SHOT, ASK JEEVES, and LIEBERMAN. Reynaldo had nothing but praise for this puzzle, and all these seed entries seem suitably “in the language” and familiar (though, sadly, Ask Jeeves is now no more). Still, to get such gems, Quigley also had to include the “odd job” JOSTLERS, the fill-in-the-blank answer OR TEA, and the old crosswordese standby ENE.

The variable in seed patches is how well-chosen the seed entries are, which is difficult to judge objectively. I enjoy the zesty tang of Quigley’s personal sensibilities, as an alternative to the “kid-tested, mother-approved” taste of the usual newspaper crossword, but when his sensibility diverges too far from mine, the results burn my tongue a little. The second puzzle’s apparent seeds were a much bigger hit with me than the first. I don’t share Quigley’s far-ranging knowledge of music, and SWEET JANE, clued as “Velvet Underground song ranked #335 on Rolling Stone’s 500 Greatest Songs of all time,” left me baffled and nonplussed. And while I do know who Shaq is and could figure out HACK-A-SHAQ eventually, sports trivia isn’t an obsession I’ve ever pursued.

But some of Quigley’s biggest fans love having their knowledge of sports and music rewarded. Likewise, I know that indulging my own obsessions with comics and Web culture will turn on some solvers and turn off others. Who to please with your seeds? How specific a set of tastes should you serve? What to plant, tomatoes, bell peppers or chili peppers? It depends on your market, and how you define yourself. I’m planning a book of sci-fi-focused crosswords, but I cut back on the Klingon when submitting to others’ anthologies. The puzzles on Quigley’s personal blog will often go places that, for one reason or another, his newspaper puzzles can’t. And that, by itself, is a reason for people to visit… to get the “director’s cut,” the unfiltered Quigley experience.

So: another tidy definition defined, right? Well, no. There’s a problem here. Seed entries are part of the construction author’s process. But genres are defined by the audience. Danielle Steel may claim she doesn’t write romance novels, but no bookstore owners in their right minds would shelve her anywhere else. (Not even in “Humor.”)

Likewise, in this recent Barry C. Silk, I’m not sure whether MAX PLANCK or ICE HOCKEY or GINNIE MAE or I DON’T CARE were seeds in construction. Heck, I don’t even know if Silk uses the same method as Quigley: HAPPINESS and TAXI METER may not have been seeds, either. But they’re the entries that jump out at me. And something generally does. And it’s usually something long. Guessing the author’s intent or technique from their work is rarely as easy as high school English will lead you to believe. But everyone tries anyway. This Brad Wilber may have begun with an entirely different inspiration than INVASIVE SPECIES and INTERNET TRAFFIC. This Vic Fleming may not have started with PARAKEET, RED STATES, GET A RAISE and EGOTISTS. To my eyes, the sheer length and position of those words makes them appear to be the plants in fullest flower. Disagree? It’s okay. But no matter which you consider the “star” entries, the structure of these puzzles is such that “star” entries do emerge, the more you look at them.

The seed patch is therefore the most common type of themeless in the most popular few crosswording venues. It has no crazy grids like a Mies, no truly oddball entries like an anything-goes… and it has apparent star entries, unlike a pudding.

How, then, can a puzzle exist– a good puzzle, anyway– without such star entries? Why, what a convenient lead-in to next week’s Part Five: The Pudding Crossword! Bring a spoon!

We won’t actually be eating anything together, but… just indulge me.