The fact-finders sneer at the anything-goes. In fact, they don’t have patience with a lot of other crossword forms. They’re not into dazzling wordplay. “More like frazzling nerd play,” harrumphs the Marian, and if it sees you chuckling at that, the commemorative huffs, “DON’T YOU HAVE ANYTHING MORE IMPORTANT TO THINK ABOUT?” The listmaker adds, “GET A JOB.”

The fact-finders have no interest in impressing you, except perhaps with the dedication that they show to their work. The fact-finders are here to educate you. So sit down, and shut up. One can at least excuse the commemorative fact-finder for a bit of temperament. Its windows of opportunity are so narrow. A puzzle like David Kahn’s New York Times Ali-Frazier fight tribute at left is only appropriate on one day of the year, the day of an anniversary. And the 34th or 57th anniversary won’t do: it’s got to be a nice round number. And when that special day arrives? Its existence and publication depend on a constructor and editor, or a constructor/editor, deciding to celebrate the relevant event. Even if there’s an event to be celebrated, a c.f.f. has to compete with other commemorative grids that are more about show-offy wordplay than hard, cold facts. The Ali-Frazier fight could have inspired a puzzle that added the ALI string to its theme entries, or subtracted it, or made it a rebus. Or perhaps the fight’s many punches could have been memorialized by theme answers which traded RIGHTs and LEFTs. Had this puzzle not had its one moment of glory in the New York Times ring, it would be banned for at least five more years, whining, “I could have been a contender.”

To celebrate his first wedding anniversary, Brendan Emmett Quigley constructed a rebus around his wife’s name, LIZ. A sweet gesture, and maybe a smarter one than loading the grid with information about her that solvers might not guess, and that she might not wish to share. But still, look at the poor c.f.f.! Standing out there in the driving rain, shouting, “Where’s the love???” 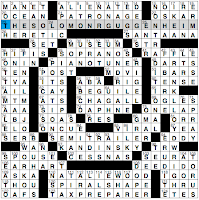 Much love is in Elizabeth Gorski’s memorable 50th anniversary tribute to THE SOLOMON R. GUGGENHEIM / MUSEUM, the FINAL MAJOR WORK OF / FRANK LLOYD WRIGHT, with a NONTRADITIONAL / SPIRAL SHAPE mimicked in the Miesish grid and the names of nine featured artists rounding out the theme content. As in the THRILLA IN MANILA, the puzzle’s floor plan includes a high count of “theme letters,” enough that it doesn’t need to hide behind its date of release as a raison d’etre.

So maybe I should just stop having a cow about that date of release, already. Sure, it briefly gratifies our desperate need for order when a grid with nine Woody Allen movies appears on the exact day of the director’s 75th birthday, as this Caleb Madison did. That gives us a little added value. But it’s not his 75th birthday any more. I don’t hate the puzzle now, just because it’s “misdated.” Do you? If so, I have some really bad news for you about the Thrilla in Manila, and the Guggenheim.

On the other hand, the marketplace’s move to Web-based and mobile-based platforms means that constructors are now much more able to control, and speed up, their work’s release date. I opted to air this installment on Thursday instead of Saturday so it wouldn’t get “drowned out” by Christmas, and I didn’t even have to ask anyone’s permission. This makes possible the use of timely facts, a new frontier of pleasure for the crossword. I experienced a special delight when seeing puzzles devoted to the 2010 buzzwords “fat finger” and “double rainbow,” the JetBlue landing incident and Jimmy McMillan. Peter Gordon’s established an annual tradition of Oscar-themed puzzles. The latest of these, the commemorative fact-finder pictured at left, celebrated the ten Best Picture nominees of last year, using a numeral for District 9. I don’t know about you, but I can’t wait to see how Gordon manages to fit 127 Hours and Toy Story 3 into the grid next year.

You’ll just have to sign up for his Fireball Crosswords January 1 and find out. In today’s hyperactive, must-know-everything-now environment, the commemorative fact-finder would seem to have a bigger role waiting for it than it’s occupied so far. It could be an entertaining one, but it could also be more than that.

Often, the most effective sources of relevant, important facts are those that dress those facts up as entertainment. The organization of real, current-events-related information– say, into a grid that contains a list of 3-25 items– is more than an OCD form of recreation. It’s a real public service. It helps us to commemorate today, and celebrate the world around us. Of course, covering today carries some risks. This Jeremy Newton, a fusion of the rebus and commemorative fact-finder genres, found a few facts about the Rockefeller Center tree lighting… but was partly invalidated when the Center broke with tradition and scheduled its lighting for the Tuesday after Thanksgiving, not, as the puzzle claimed, THE WEDNESDAY.

It… it all happened so fast. If Newton or Will Shortz had seen the change coming, they could have changed the clue from “When 148-Across traditionally takes place” to “When 148-Across took place before this year.” As it is, even with the qualifier “traditionally” in there, the result is… imperfection. Disorder. Chaos. There’s another word that occurs to me, a word that sounds a bit like “fact,” but this is a general-audience series.

Next Thursday, we’ll discuss the risks of current events as they apply to the listmaker, and see if we can’t stretch this crossword-personalization gimmick to the breaking point. Be here.