Do you know what works of literature are cited most often on the AP test? Check out this Sporcle quiz. This CrosSynergy regular pops up occasionally with an NYT puzzle. Today’s theme is a substantial one: four 15-letter palindromes, none of which I’ve seen before. They are:

I always like a good palindrome. At the recent MIT Hunt puzzling event, the perennial Palindrome team went with the moniker Stacy’s Super Aware Pussycats. How brilliant is that?? I heard they picked up the palindrome from Aussie David Astle’s book Puzzled. (Dang, where did I put my copy of that book?)

Some of the fill made the puzzle feel like it’s been sitting around for a few years. SOSA, ICE-T, and the term MALL RAT crossing wan OCALA smack in the upper left corner gave off that impression. (And elsewhere, ASTA, ORAN, UMIAK, THE FAN.) Would this corner be better?

Maybe. Maybe not. Still have the SOSA there. Your main S*S* alternatives are SI SI (meh), SASS, SUSS, SASH, SO-SO, and abbrevs SYST and SESS.

It was mildly off-putting to have ALIVE a bit below the first palindrome’s LIVES.

Do make a mental note of the new (to me) RAVI clue at 11d: [Jazz saxophonist Coltrane]. As you might have guessed, Ravi Coltrane‘s parents are jazz saxophonist John Coltrane (whose first name is also 4 letters, just to mess with you) and pianist Alice Coltrane, and yes, he was named after legendary sitarist Ravi Shankar.

Grumbles about fill may be taken with a grain of salt, of course, when the theme is more ambitious than usual. A 60-letter theme asks for some concessions, and if I like the theme, I am willing to grant those concessions. So I’ll give the fill a grudging pass and applaud the palindromic coolness. The theme entries in this debut puzzle knock out the word AND—68a: [Word usually found in the answers to starred clues]—and leave us with changed meanings. I don’t recall seeing such a theme before. Which is not to say no one’s ever done it—just that it feels fresh and new.

The theme clues have asterisks owing to the bumper crop of long fill. The best of ’em:

Some of the shorter fill has that old-school repeater vibe. AES, Adlai E. Stevenson, is your [DDE opponent]. Now, OPAH, the [Shimmery sushi fish], looks like crosswordese but I could swear it’s used more now than it was in crosswords 20 years ago; still, I’ve never seen it on any seafood menu. The ANION, a [Negatively charged atom], doesn’t show up in crosswords as much as it used to. EERO Saarinen is eternal in crosswords. And then, of course, we have the Crosswordese Crafts Corner: 52d: [Wickerwork willow] is OSIER and its neighbor 61d: [Shaggy Scandinavian rug] is a RYA. 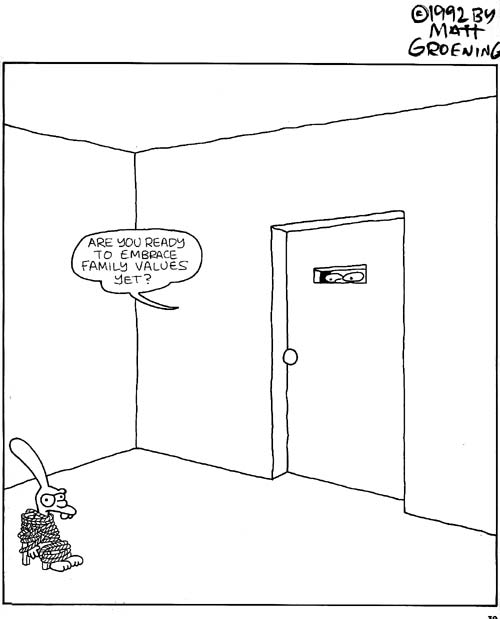 and I enjoyed the stacked longer crossing entries, from CUT FLOWER, LOVED ONES, ACCOLADE and the beautiful Scarlet TANAGER. Funny to have DYED before HUED for “Tinted” and then to find HAIR DYES just two rows away (“Garnier products”). “Jeff’s partner in Life in Hell” didn’t immediately come to mind, I had forgotten about the comic strip produced by Matt Groening featuring two anthropomorphic rabbits set in LA. So, I gather that there some titles that spell out how many times something something. I know “Three Times a Lady” (also known as “Fee Tines a Mady” in Eddie Murphy’s skewering of the stereotyped character Buckwheat) but not the other two:

I could do without DERATTED, but Matt’s other long answers are all good ones. An OLIVE BRANCH of peace suggests olive oil, which takes us right to that GREASE STAIN in the garage ([Tough spot for a mechanic?], who has clumsily spilled the olive oil he was drizzling on his salad). Papa Christmas, aka PERE NOEL, is joined by CALL GIRLS and EDELWEISS. I’m thinking of moving coverage of Ben’s puzzle from Thursdays to Tuesday or Wednesday now that the Fireball is back on Thursdays. But some weeks there won’t be a Fireball, so look for your Ink Well coverage on Thursdays those weeks.

This week’s theme is male advertising spokescharacters called “Mr. __” whose “surnames” can be found at the beginning of the theme entries:

Cute theme, and the phrases that begin with the mascots are all so lively. MET MUSEUM feels a hair off-base—”the Met” and “Metropolitan Museum” sound better to me, but I’m not a New Yorker so what do I know? The theme clues are starred to make it clear that the other long fill—ANTICLIMAX, CELERY SALT, IDEALISTS, ORIENTATE—are not part of the mascot theme.