Wordplayers are easily the most popular form of crossword after themelesses in general, and even more popular if you’re focused on the high-end publications like the Timeses and The Onion. They’re like the phylum Arthopoda of the crossword ecosystem: surely one category can’t contain this much variety! But it can and does. Wordplay’s the heart and soul of crossword-making, really. Making words multitask is what makes us see letters as phonetic symbols and building blocks at the same time.

They subdivide into the algebraic, camouflage, punster and freakshow, and we’ll get into even further subsubdivisions as we go. Algebraics are probably the easiest to explain, so we’ll start with them. (After seeing all the math whizzes in attendance at the American Crossword Puzzle Tournament, I figure all y’all cruciverbaholics do combinatorial number theory for fun, so this should be a snap.) Some algebraics are additives. Their theme entries result from the insertion of a string into a basic word or phrase, creating a new, larger string not normally found in nature. (We’re counting a single letter as a string, here and elsewhere. One glyph can make all the difference!) Next, we have Mike Shenk and Alice Long’s multi-string, mono-position additive, “Joint Filing.” Each of the theme entries has become unnatural through the addition of a different string, but all in the same place: between the two words of the original entry. LAUNCH KNEE PADS, BRASS KNUCKLE BAND, NIGHT WRISTWATCH, TABLE HIP-HOP, COLD SHOULDER WAR, BABY ANKLE MONITOR, STOCK ELBOW ROOM. Though the strings are all different, they aren’t random: each is the name of a joint, as hinted in the puzzle’s title. Sadly, BLUNT is not a permissible insertion. 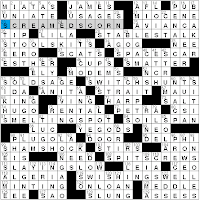 Additives can be mono-string and mono-position. In Patrick Berry’s theme entries at left, every natural two-word base phrase has had an S placed at its beginning: SCREAMED SCORN, STOOL SKITS, SPACE SCAR, SOLD SAGE, SWITCH SHUNTS, SMELTING SPOT, SOIL SPAN, SHAM SHOCK, SPIT SCREWS, SLAYING SLOW, SWISHING SWELL. It’s possible to hair-split even more than this. For instance, one could separate puzzles that only add the ET string to the end of a phrase– PASSES THE BUCKET, LIKE A ROCKET– from those which also add it to the middle of a string and the end of a word, but not its middle or front (MUSKET OX). I’m sure you’re positively tingling in anticipation of more academic debates like these, but let’s turn to the practical. Using a single position or string affects the puzzle’s overall ease of solve, and difficulty of construction, two characteristics that often need to be contemplated in balance.

Consider one more example, this Brendan Emmett Quigley multi-string, multi-position crossword, “What’s The Hub, Bub?,” where neither the inserted string nor the place of insertion is a constant. GALAXY PRIDE, SORDID CAESAR, CALGARY GRANT and ATLAS NEEDED all result from the insertion of three-letter codes for major airports in the U.S., or “hubs.” By providing neither a consistent string nor a consistent placement, Quigley demands a lot from his audience here, and even a broadly hinting title wasn’t enough for me to figure out the theme until I was almost done. On the other hand, the close-knit nature of that theme offers some satisfaction, and the strings are uncommon enough that they couldn’t be anything else.

What’s more, that same latitude allows Quigley to create four highly colorful, natural theme entries, which might have been more difficult with just one string. RELAXED RICHARDS, KLAXON TIKI and DROP THE FLAX BOMB are the best I can do as mono-string matches for GALAXY PRIDE. And I’d need to talk to some people before I could be sure RELAXED RICHARDS was gettable enough for general readers. Even after two modestly successful movies, fifty years of comics and various other media tie-ins, the full name of the Fantastic Four’s leader mayyyyy still be considered too obscure. (“Now there’s an injustice!” yells the comics fan in me. Easy, inner geek. I’ll be indulging you again soon.)

Subtractives, as you may have already guessed, are about subtracting a string from an ordinary phrase. Randall J. Hartman’s example at left includes [HE]AD OF STATE, [HE]BREW LANGUAGE, [HE]AT EXHAUSTION and [HE]ART ATTACK. I would agree with Crossword Fiend’s Janie that the first and third of those entries read a bit awkwardly. “Not normally found in nature” is one thing, “not parseable” is another. Or as we science-fiction obsessives know, just because you’re making something up doesn’t mean you can feed the audience complete nonsense. Strings, as it turns out, can be phonetic as well as alphabetic. All that’s subtracted in the Merl Reagle puzzle at right is a /k/ sound– turning Q into [W] and respelling some resulting words for WYATT ON THE SET, WICKER PICKER-UPPER, HERE A WHACK, THERE A WHACK, / EVERYWHERE A WHACK WHACK, SOME ASSEMBLY REWIRED, FEELING A LITTLE WHEEZY and PORCUPINE WILL.

Every aspect of a subtractive can be found in an additive, and vice versa. Phonetics versus alphabetics, mono-string versus multi-string, mono-position versus multi-position, it’s all in there, just as it’s in our final two categories, below. But since subtractives are about seeing what isn’t there, they’re generally just that little bit harder than additives. There are two ways to combine the additive and subtractive types. In one, the substitutional, one string replaces another. Suppose IP replaces AP. That can give us TIP DANCING, TRIP DANCING, SNIP JUDGMENT and RIP SESSION, as in John Lampkin’s work at left.

One notable mono-position, multi-string substitutional, not pictured here, is Matt Jones’ “Surprise Endings.” What makes it unusual is that the entries– THE EVENS, DOCTOR WHA…?, RAISING HOPS, AMERICAN DAB, TRUE BLOOM and HELL CATE– all proceed from root entries with a common theme (TV show titles The Event, Doctor Who, Raising Hope, American Dad, True Blood and Hellcats). Themed roots like these, or themed results, can work well with otherwise loose parameters. Making this puzzle mono-string as well as mono-position and themed-root would have constrained it too much, forcing Jones to either abandon the theme or resort to obscura. Finally, rarest of the lot is the cut-and-paste, wherein one or more strings are subtracted from one entry, then added to another. The accompanying Harvey Estes work, “Friends in Low Places,” has pulled PAL out of BUCKINGHAM []ACE, CAR[] TUNNEL SYNDROME and PA[] INFALLIBILITY, and dropped it into A BOY NAPALMED SUE, IMPALA GIRL WATCHER and THE PALIN CROWD. As the title hints, the three PALs have fled the “high places” of the upper entries to seek refuge in the “low places” of the lower ones. It’s tough to make cut-and-pastes multi-string and solvable, but a multi-position cut-and-paste would probably work just fine.

Where are the digital aids in creating puzzles like these? “Nowhere,” says my initial research. If your string is uncommon enough, you might be able to look it up on OneLook, as I did for the “LAX” example I created above. But it seems like a tool should exist somewhere to tell you how many strings in a user-provided word list would continue to be strings in that list with the subtraction of “LAX” or the substitution of “W” for “QU.” (Subtraction could be used as “reverse addition” for those looking to make additives or cut-and-pastes.)

This wouldn’t be a perfect solution, and it probably couldn’t handle phonetic algebra like that found in the Merl Reagle piece above. Substituting W for QU directly for that piece would give us WICKER, REWIRED and WILL (as well as WAY, WICK, WAIL, WAKE, WEST, WIZ, SWAT and, no doubt, others). Substituting WH for QU would give us WHACK (also WHIZ, WHITE and the phonetic false positive WHO). But we constructors would still have to work out WHEEZY and WYATT (and WARTS and SWIRL) on our own.

(The question of whether SQUIRREL is monosyllabic enough to justify SWIRL is left to you readers. And your consciences.)

Caveats aside, such a program would often save constructors a lot of time, time which could be used to sort through possibilities and find the cleverest, most rewarding ones for solvers.

Attention, programmers. I will pay a $100 bounty to the first person who produces such a tool, releases it to the public, and lets me know. You are permitted to make money from the tool in other ways, such as sales, shareware and on-site advertising. The bounty’s just to cover what I expect should be a mere few hours of programming time for experienced hands. Let’s make this happen!

Next time out, we’ll have a comprehensive view of the camouflage crossword! Yes, we’ll see every aspect of it that exists to be seen. Or… will we???