Firstly, are the theme entries in a puzzle natural or artificial? That is to say, are they perfectly innocuous phrases you’d expect to encounter regularly outside a grid… the kind sometimes called “in the language?” Or are they invented specifically for the puzzle, and thereby the twisted, experimental freaks that only a cruciverbaholic could love? (Although, love them we do, love them we do.) Here’s one of my flawed attempts to put some artificial entries where most people think they aren’t meant to go, Frankenstein-fashion. I can already hear Amy Reynaldo hissing at SSSSS crossing SISS [boom bah], the use of two Roman numerals (one in a theme entry), and A FAN, which I wanted to clue as “Enthusiastic.” But, c’mon, Amy, the theme entries! Aren’t they something?? LYNX XXY SYNDROME (“It leads to calicos with ear tufts”) and a T.J. MAXX XYLOPHONE (“Kids can hammer this in the toy section while you chase clothing deals”), SPANDEX XXL (“If you buy this, it better be exercise wear”) and REMIX XXVII (“Title that says, ’26 tributes to this classic tune just weren’t enough'”). Eh? Eh? For a second example, let’s go to one of the masters: Matt Gaffney. In “Our True Enemy Has Yet To Reveal Himself,” Gaffney camouflages the names of four famous “enemies” in two different ways. Each theme phrase contains the name of their rival as one word– and their own name, concealed within the second word. KGB MUSICIAN, HARVARD VEGEMITE, FRAZIER LOYALIST, VHS TIBETANS. The theme calls for this “two-way” approach, since ALI, CIA, MIT and BETA have nothing in common except being one-half of famous rivalries. Obligingly enough, that two-way approach calls another question to mind… 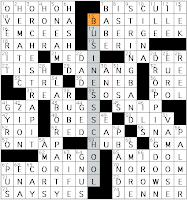 Second question: is only one part of each theme entry in the camouflage participating in the theme (tokenist), or is more than one independent part doing so (fractal) or is more than one overlapping part doing so (merger)? So far we’ve only seen tokenists. I’m treating the fractal as a subcategory of camouflage, but it could be seen as a subclass of additive, too. Here’s one with a Marian-esque collective nouns theme and natural entries. This example from Brendan Emmett Quigley includes ORCHESTRA PIT, STRING BAND, BUSINESS SCHOOL, DROPPING DOWN, and LABOR PARTY… each familiar, natural phrases containing two collective nouns for animals. Quigley may have misstepped a bit by cluing the phrases in terms of their collective-noun components rather than their literal meanings. It could have made a fine “guess the theme” contest had he used the latter. (More on contests later. You’ll just have to be patient.) In this Matt Gaffney, “There’s More To This Tale…”, each part of the artificial theme entries is an anagram of TALE plus one “more” letter: LEANT LATER, EILAT LATTE, OLETA ECLAT, CLEAT LATHE.

There’s more to this tale, but we’ll return to this particular crossword later.

You’ll just have to be patient.

Third question: what’s the configuration of the camouflaged string? So far, all the camouflages we’ve seen have been chunky. Their key strings have all been in one place. But camouflages can feature their strings in a variety of other configurations: parenthetical, initial, blended and Vector Three. In a parenthetical crossword, the key string is torn in two and placed at both ends of each theme entry. Behold Dan Naddor: STORM TRACK, STEADY AS A ROCK, “STOP THE CLOCK!”, STICKER SHOCK, STARTING BLOCK and the defining entry STOCK SPLIT. Unfortunately, “STOP THE CLOCK,” while unquestionably correct, could be “split” two different ways: “STOP THE CLOCK!” “STOP THE CLOCK!” If it’s split the second way, that leaves only one out of five entries with the STO/CK split, instead of ST/OCK. Still, replacement options are slim. Would STAY IN HOCK (“Don’t get out of debt”) work for you? Is it natural enough? It would make the ST/OCK split uniform across all five entries, firmly mono-position. These are the decisions that try our souls.

In an initial crossword, the key string is spread out over the first letter of each word in the theme entry. Randall J. Hartman: HEADS OR TAILS, HELEN OF TROY, HOLD ON TIGHT, HAMMER OF THOR.

The repetition of OF doesn’t thrill me here; even though HELEN OF TROY and HAMMER OF THOR are both strong, mythological entries, the latter looking even sexier in light of the summer movie. How about replacing Helen with HEADED OFF TO (“Made for”)? Oh, you’re just mad you didn’t think of it first. Note the use of circles in the grid. These aren’t really worth considering as a separate class of crossword– aren’t you relieved? They’re just a hint, a tool to direct the solver’s eye and make the hard solves easier. Or perhaps a way of saying, “I may have gotten a bit too big for my britches here. Enjoy this extra help, on the house, so that you can enjoy my idea as much as I obviously do.” No such help is needed for these two works, by Joe DiPietro and Derek Bowman, respectively. Both initial crosswords camouflage the most familiar of alphabetic strings: A B C D E F G H I J K L M N O P Q R S T U V W X Y Z. (If this string is not familiar to you, see a doctor.) 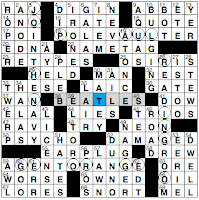 Blended crosswords just chop up the string and stick its parts any old where amongst the theme answers. These puzzles usually require the aforementioned circled squares. In this one, from a fourteen-year-old Ben Pall, it turns out that the names of the four BEATLES are hiding within JOIN THE NAVY, POLE VAULTER, AGENT ORANGE and READING ROOM. A fourteen-year-old who knows the Beatles (or knew them in 2009, when this puzzle was released) is as much a beacon of hope for the future as a fourteen-year-old who makes crosswords. And what about this “Vector Three” thing, hmmm? Long story short, it’s a puzzle with hidden features that transcend the simple across and down dimensions… becoming even more blended than blended, violating the seeming laws of crossword physics. But for that reason, it’s as much a trickster crossword as it is a camouflage crossword– and since we’re running long yet again, we really should save it for later in the series. You’ll just have to be patient.

Merl Reagle brought the humble camouflage into the light with the title puzzle in every crossword-lover’s favorite documentary, Wordplay, reproduced at left. The camouflage crossword is but an inanimate collection of letters, meanings, patterns and ideas. Such concepts as “gratitude” are beyond it. But if it could speak to Reagle, it would probably say… Oh, and speaking of Merl Reagle…

Next time out: PUNS! There will be no mercy.