“If I were punished for every pun I shed, there would not be left a puny shed of my punnish head.” – Samuel Johnson

“A pun is the lowest form of humor – when you don’t think of it first.” – Oscar Levant

There’s a healthy contingent that say sarcasm is the lowest form of humor instead. Personally, I think it’s “Carlos Mencia.” But let’s not split hairs. (About this.) The point is that puns are a much-derided form, yet one that even their best-known detractor couldn’t quite stay away from. How come? Levant’s little riff on Johnson may indicate why: more than most ideas, puns seem really quite wonderful when you think of them and a silly waste of time when you see others thinking of them.

For a certain value of “you,” of course. The lowly pun has its partisans, especially among crossword enthusiasts. But a hardcore fan base alone can’t explain how crosswords get away with so much pun-drunkenness in a national culture so pun-down. Marshall McLuhan’s Understanding Media to the rescue:

There is a basic principle that distinguishes a hot medium like radio from a cool one like the telephone… A hot medium is one that extends one single sense in “high definition.” High definition is the state of being well filled with data. A photograph is, visually, “high definition.” A cartoon is “low definition,” simply because little information is provided… Crosswords are one of the “coolest” of mass media that the audience members still follow through to a predetermined end. (Almost always. There are a few crosswords with non-predetermined ends, but later for those.) The solver fills in every letter himself or herself, checks almost every clue, thinks of things. All media rely to some degree on inception, on making the audience feel that the artists’ thoughts are their own. But crosswords’ gentle approach to this illusion makes a pun seem far less eye-roll-worthy when it comes to you in the middle of a solve than when you watch James Bond improvise some “witty” epitaph for someone he’s slaughtered in the name of queen and country, just prior to having better sex than you.

You may have noticed we’re not exactly barreling through the definitions and subsubsubcategories like we have been in the previous few chapters. That’s because the punster crossword is a more modest creature than the multitalented algebraic and the secretive camouflage. Oh, look, now we’ve made it blush. Granted, some students of the pun are quick to distinguish between homophones (same sound but different spelling), homographs (same spelling but different sound) and homonyms (same spelling and sound but– like the other two– different meaning). As in most aspects of puzzle design, it’s best either not to mix these types at all or to mix evenly. Homographs, an uncommon type, see little exercise, but near-homophones (same-ish sound if you don’t listen too hard) see a lot. Near-homophones could be heard as word algebra, but in punster crosswords, they’re not done in an organized enough pattern for a single “operation” to emerge.

For a source of homophones, I haven’t run into anything that beats RhymeZone’s “find homophone” feature. Owned by the same company as OneLook, RhymeZone has been around forever and its design was old in 1999, but its database keeps getting updated, and isn’t that what counts? But it’ll still miss things like IV/IVY and ACCEPT/EXCEPT. Probably the best resource for heterophonic homographs is John Higgins’ list of 594. Homonyms are often confused with homophones, making it depressing even to google them, but almost any word has a homonym if you look hard enough. Try searching “define:[yourword]” in Google instead. Please share any better resources you’ve found in the comments! I am only one man.

Also worth a brief mention are capitonyms, kinda-sorta heteronyms whose meaning changes when capitalized, like polish/Polish. These are popular among writers of tricky crossword clues (i.e., “Polish jokes” for EDIT and “August body” for CALENDAR), but it’s difficult to find a usable list of them, because what one person finds a familiar capitalized word, another might find laughably obscure. This one‘s not a bad start, but– Ewe? Liver? I don’t think so. Wikipedia‘s not omniscient, either.

There are only two real categories of punster, and even their primary distinction is one we’ve already been over. Call them the Groucho, and the Burns and Allen.

The Groucho has artificial theme entries. He really just puts it all out there. There’s no pretense in his grid, and his clues are the type that call for question marks, if not interrobangs. Merl Reagle, well-known for this form in particular, crafted this list of “near misses” during the 2011 Oscars:

Sometimes the theme of the puns in a Groucho relates to what the phrases were before their transformation (root-phrase theme). That’s a tricky theme to do well, and usually requires the near-homophones to be a bit… further out. THE KING’S PEACH is a true homophone, but WINTER’S TROMBONE and BLACKENED SWAN have taken some liberties. Other times, the root phrases are more varied and the theme is in their transformation process (conversion theme). Take this Emily Cox and Henry Rathvon, with its puns based on fabrics. You can see it’s much more “tightly woven!” HAR HAR HAR HAR HAR [dodges tomatoes] Tighter still, though, is this Groucho with another movie theme– but this one encompassing all well-known movies, with its theme located in the clues (clue theme). You can Google around to see who did this one. Since the puzzle rips off its theme entries from Four Word Film Reviews, without attribution, I don’t really feel like giving David Poole credit– oops.

Okay, maybe it wasn’t Poole’s fault. Maybe he posted an attribution which got accidentally edited out. Maybe posting this will draw him out of hiding and into the comments section. Issues of fair use aside, the results for the solver are entirely pleasant. “Taxi Driver tagline?” becomes A FARE TO REMEMBER and “Titanic tagline?” becomes the delightful ICY DEAD PEOPLE, both pure homophones. The “Back to the Future tagline?”, A COMEDY OF ERAS, and “Return of the Jedi tagline?,” LUKE BACK IN ANGER, are both very, very close to pure homophones, and might even qualify as pure for you, depending on your accent. Look, some of my best friends are Bostonians, it’s cool. 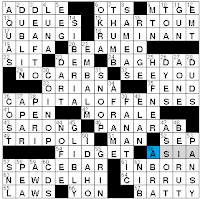 The Burns and Allen crossword works like a comedy duo, with the natural theme entries acting as the George Burns, the “straight man,” for the punny, madcap Gracie Allen clues. Nothing seems snarky when you look at the completed grids, only when you couple those grids with their clues. Here’s one by Greg Kaiser and Steven Ginzburg with the defining entry CAPITAL OFFENSES, (“Pun-crimes committed by the answers to the six starred clues?”) Each starred clue leads to a national capital: “Final resting place for old autos?” leads to KHARTOUM [“Car tomb”], “Father of the Ziploc?” to BAGHDAD [“Bag dad”], “Wide shoe specification?” to TRIPOLI [“triple-E”], “Recently opened sandwich shop?” to NEW DELHI [“new deli”], “Multiplyin’ by 2?” to DUBLIN [“doublin'”] and “Base of a fragrant tree?” to BEIRUT [“Bay root”]. Then again, puns always bomb at the comedy clubs, so what do they know? They’re an un-re-wording venue!

Next week: the furry, funky freakshow.

4 Responses to CTS #13: The Punster Crossword