“Wait a second… DUMB DAD SORRY FOR HIS BET. Wow. It’s almost as if Dad planted that message. No, it must just be a weird coincidence. But what if it’s not? No, it must be. Or mustn’t it not?”

Lisa Simpson’s reluctant discovery is one shared by many solvers every so often– after hundreds and hundreds of answers that travel either across or down, could they have stumbled onto a pattern that strikes out in a bold new direction?

Welcome to the world of Vector Three. 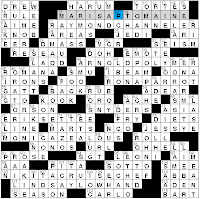 The message Lisa finds is planted diagonally in the Merl Reagle grid at left– without the helpful little circles that sometimes designate such things. There was no indication of a hidden message in the copy for this puzzle either, when it ran in The New York Times. Solvers were simply given the puzzle, business as usual, and encouraged to see it featured in the last few moments of the Simpsons episode, which aired that night.

Many solvers, including Amy Reynaldo, were able to spot the message after reading the episode’s plot summary: “Homer gets a job breaking up couples, and Lisa becomes an expert crossword puzzle solver, but Homer bets against her in a competition.” This summary, though, does not mention that Lisa is so enraged by this that she renounces the name “Simpson” and adopts her mother’s maiden name “Bouvier,” going so far as to make a “LISA B.” T-shirt. This Will Be Important Later. (Except the T-shirt part.)

The simplest type of Vector Three is a one-shape, which includes the diagonal line drawn by DUMB DAD. I seem to remember a few diagonal-line puzzles from my earlier solving days, which makes sense, since it’s the most obvious “third direction” to take. These days, though, it seems like the newspapers prefer a more creative use of the canvas.

Jim Horne’s collection of unusually “visual” New York Times crosswords includes the shapes of a Golden Ratio spiral, a crude star, a martini, a house, a sailboat, the Gateway Arch, a treble clef, a bat, a hangman, a tree, an infinity symbol, the Eiffel tower, a musical note, an umbrella, Henri Matisse’s La Bateau, the planets in a lunar eclipse, a snowman, the liberty bell, the letter A, the letter S, a V-formation, two Christmas trees, a double helix, a clock at midnight, and the Big Dipper. More shapes are doubtless soon to come to the Times. Probably nothing too Freudian, though.

Oh, and for solvers who want to celebrate the special qualities of paper in an increasingly digital society, two Vector Threes transformed their grids into an unfolded paper airplane and an unfolded six-sided die. Horne’s near-comprehensive list covers both of these, but (at this writing) it somehow missed the unfolded Mad Magazine fold-in, though. What, me picky?

Some of these puzzles contain hidden words or messages (DUMB DAD SORRY FOR HIS BET) in their third vector, in a manner similar to the camouflage puzzles. Others have simple letter-patterns, to fill in or to connect in alphabetical order. Still others are made up of rebus squares. In fact, Vector Threes often combine with rebuses or some other, easier type, which provides more solving satisfaction while the audience works its way toward the bigger pattern. 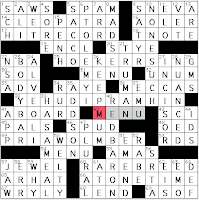 Or patterns. Yeah, you knew the multi-shape Vector Three was coming. Brendan Emmett Quigley has done a notable pair of these. The first, “Pull Down Menus,” takes a MENU camouflage (HOME NURSING, YEHUDI MENUHIN, PRIME NUMBER) and “pulls” the MENU string down to the row beneath it, swapping out the letters that would have occupied this space, in a way that really does recall the pull-down menus of various computer programs. The second also crosses over with the camouflage by putting EGG on SPERM in two larger entries apiece: PEGGY SUE/LEARNER’S PERMIT, REGGAE/WORDS PER MINUTE. Quigley published the puzzle seven months before he announced his impending fatherhood, and described it as “in no way an announcement.” But the theme, and the defining entries ORGASM and PREGNANCY, seem to show pretty clearly what was already on his mind. No privacy for a cruciverbalist. This Matt Gaffney, “Form Follows Function,” kicks the multi-shape up a notch. Gaffney instructed readers to find a 2000s pop song suggested by the puzzle. (In the original unfilled grid, no squares were colored.)

When I solved this one, the odd crossing of two three-T answers– SCOTT TUROW and MATT TURK– signaled to me that something might be up. Having the first name I did, I quickly noticed all those T’s were in the shape of yet another T. Four similarly-shaped clusters of letters later, the song title– TOXIC– shone out from the grid as if in nuclear-waste green. Gaffney later assured his solvers that the use of the song title was not meant as a Britney Spears endorsement. I reminded myself that I usually endorse the contemporary fill, then took a shower for a full thirty minutes.

Finally, we come to the off-grid Vector Three, where the answers extend beyond the grid itself, usually in a way that’s hinted within the rest of the puzzle somehow. The first of these, just for a change of pace, is a Patrick Blindauer-Quigley combination, and the second is… yet another Quigley (I swear I’m not doing this on purpose). At left, the word SECRET is cited as “66-Across” in some accompanier clues: [SECRET] ENTRANCE, [SECRET] ADMIRER, [SECRET] SANTA, [SECRET] BALLOT, [SECRET] GARDEN, [SECRET] AGENT, [SECRET] HISTORY, [SECRET] FORMULAS. In the second, Quigley arranges four familiar Internet suffixes over the line of each side of the grid, the better to symbolize Prince’s odd quotation, referenced in the puzzle’s center, that “THE INTERNET is completely over.” (Some of you may not be familiar with Prince. He’s a singer. If an oldies station plays a song that sounds kind of like Michael Jackson but not quite, that’s Prince.)

Next week, the Simpsons meet the diabolical, maniacal Moriarty! Not literally, although that would be awesome.