Here’s a record that nobody wants to beat: Tim Croce’s first crossword submission, made as a high school senior, was accepted for publication recently after a staggering 11 years in the New York Times slush pile. (And no, it hasn’t been released yet.) As regular Fiend readers know, Croce’s had a few submissions reviewed a bit more promptly since then.

British crossword-maker Orlando, interviewed in The Guardian, has a few insights into the online market:

To me, the notable thing about online puzzles is their inherent conservatism. Just think what could be done online with crosswords incorporating hyperlinks, sound, pictures, video and so on. But solvers seem to prefer overwhelmingly a close simulation of what appears in their newspaper: plain text; black and white grids. There’s no demand for the bells and whistles.

Missed it last week: the youngest crossword-maker ever featured in The New York Times talks about his experiences with the Will Weng administration, and a notable letter of recommendation he earned with his efforts: 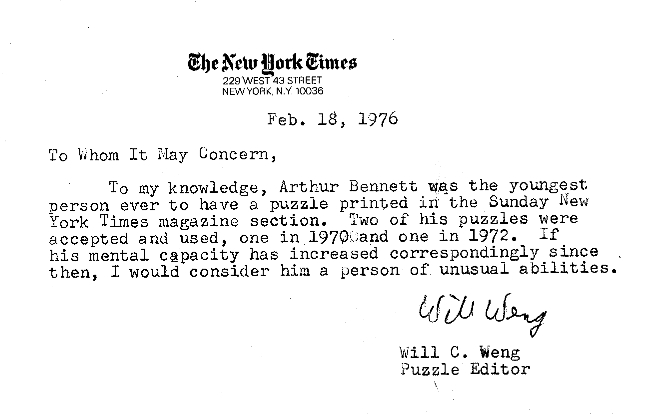 Finally, learn how crosswords can (sort of) make you richer.