HELIOtropic and a sunBURN are also semi-thematic.

I liked the longer fill (VAGABOND, LADY LUCK, Bowie’s “LET’S DANCE”—go have a listen, KABOOM, LOUSE UP, and Minnesota GOPHERS) but there were a number of off-putting bits in the grid too:

Interesting new fact about NAS (35d. [“Daughters” rapper])—he’s just been honored by Harvard naming the Nasir Jones Hip-Hop Fellowship after him, so the rap haters out there should give some Ivy League props to Nas now. Read all about it.

This isn’t your traditional “add-a-letter” theme idea; a synonym for “fix,” namely RIG, is inserted into four unsuspecting phrases: 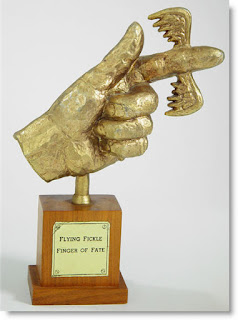 I really enjoyed this theme, although the resulting “fixed” entries were somewhat of a mixed bag. I’ll actually award my FAVE to both the first theme entry, PRIGS, I LOVE YOU and the very apt title, “The Fix Is In,” which is exactly what the constructor did here. The partial A GAY, as in “We’ll have a gay old time” is a new entry on me–but it’s so out there, I can’t rightly give it my UNFAVE award. I’ll guess I’ll give that to the revealer at 60-Down, [“Fix” synonym added to the phrases at…] for RIG itself, since, even for a beginning solver, I believe this was unnecessary.

Okay. Tell the truth. Those [Drawers that are disorganized in this puzzle…] at 22A. After entering PANTS (because after untwisting those circled letters you saw what Liz was up to), did you first think of this or of something more like this? Because, after all, knickers and PANTS and drawers are all synonymous—with drawers doing double-duty for the undergarment and a place they may be found. I was so proud of myself for sussing out the puzzle’s gimmick on the basis of the title with its cryptic-style message (where the word twist serves as an announcement for anagram), my first (un-thought-out) thought was of the latter. In my haste, I wasn’t giving full attention to just what kind of drawers were being referenced. Which, I blush to say, I only came to realize while composing this post. Got me! Again…

That said, I still took this one down in a trouble-free way. How about you? In case you have any question about what Liz did and how she did it, a look at the theme answers should clear up any questions. In all cases, she’s found lively, in-the-language base-phrases that contain the letters in the word PANTS, but that scramble ̕em up. Comme ça:

While UPSTANDING is the only entry that’s a single (compound) word, I particularly like the way the letters of PANTS span the words in the remaining themers. I suppose the “weakest” of those is those BUNDT PANS, only because that’s the only example in which the theme fill doesn’t contain (in the sense of “surround”) the anagrammed letters. But ya know what? Life’s short. I’m not gonna get my knickers in a twist about that!

Rather, let me mention some more of the puzzle’s virtues. I may be in the minority here, but I’m one who loves well-chosen prepositional phrases. I find that there’s something very “present” about them, and I take this as a real plus. So, glad to see ya: AGREE TO, BUILD ON, REINS IN and TOP OUT—which may happen not only when you [Hit the upper limit, as a salary range] but when you do the same on your ATM CARD. And, oh boy, do I like Liz’s clue for that: [Wallet item that’s often swiped?]. So, not “swiped” as in stolen (we definitely hope, although it’s fairly safe to say this is not an unusual occurrence…), but “swiped” as in passed through an electronic scanner. (Which reminds me of another clue that was tricky to parse: [Force] for DINT—where force is a noun and not a verb. First learned this word as a kid, from the British musical Salad Days, when the university dons, bidding their students farewell, remind them that: “By DINT of labor unabated, you have gradually graduated!”)

EASY FIX is one peppy phrase; and you don’t want to know my AVC-style/censored response to [Seamstress’s expletive]. Punny answer is “OH, DARN!” I like the sublime-to-ridiculous mirroring in the grid of the near-perfect GODIVA (chocolates) and those far less-than-perfect autos, EDSELS—a word that’s become synonymous, in fact, with “epic fail.” I also like ART SALE—because it reminds me of those TV ads that always make me giggle (okay—I’m a snob…) about “starving artist” and “hotel art” oil painting sales held at the Marriotts around the tri-state area. How about where you live? And while I have a quibble with [Early-evening light show] as the clue for SUNSET (doesn’t the kind of light show a SUNSET provides depend less on its being “early evening” than on time of year and where you are?), I sure love the image that word conjures up: The theme works pretty well, though it bears noting that the SMILE and JOKE that are cracked are exactly the ones in 18a and 3d, whereas a CASEWORKER isn’t working a criminal case and SAFE HARBOR has nothing to do with a burglar-proof box. It would have been better to use all four literally or all four with other meanings.

I checked Wikipedia to see if BUDAPEST and CHI-TOWN were sister cities. I was under the impression that sister city arrangements were to be made only between cities of comparable size. So why does BUDAPEST have two American sister cities—Forth Worth, which is less than half its size, and New York City, which is more than twice Budapest’s size? Apparently that’s a looser guideline than I had been led (by undoubtedly nefarious individuals) to believe. Neat theme—Take a music genre and add one letter to make a word negative.

Lots of pop culture names in the grid, which I enjoyed:

47a. [Pic taken at arm’s length], SELFIE. Do you think this word will enter the language long-term, or is it a fly-by-night neologism?