The theme is body part-verbing:

The theme feels Mondayish but also a little bit out of kilter. Same too with the fill. 32d: [Eskimo home: Var.]?? We’re throwing the oddball IGLU at the Monday beginners? That hardly seems kind. We are also expecting them to grapple with 9d: [Drag queen in “La Cage aux Folles”] ZAZA (which I absolutely did not know, and it is not often that I run into entirely unfamiliar answers in the Monday puzzle), crossing the end of ABABA, 15a: [Addis ___, Ethiopia]—two not-universally-well-known proper names. (And actually, ZAZA crosses three proper names!) Note that most African capital cities never appear in crosswords—Bujumbura, for example, or Nouakchott. But ABABA is hardcore crossword fill, a regular visitor to the grid thanks to its three vowels alternating with two consonants. Also a tad surprised to see N-TEST, 23d: [Bikini blast, briefly], in a Monday puzzle. The N is entirely arbitrary, no? Could be a nuclear N, hydrogen H, or atomic A (and you’re already expecting the solver to be hip to this x-TEST shorthand that we pretty much never encounter these days outside of crosswords). So you’ve got to know that the 23a: [White House grp. that meets in the Situation Room] is the NSC, or National Security Council, and not the ASC or HSC. Also not too familiar to non-lawyers who are new to puzzles: 21d: [Legally prohibit], ESTOP. Or ESSEN, the 42d: [German steel city]! Crikey.

I don’t really like noodles much, but I do like to see PAD THAI in the grid. It would’ve been nice to see EBONY clued as the magazine, as a counterbalance to TIME magazine. Ebony’s cover doesn’t have a graphic-design trademark like Time’s red border, but there are other salient ways to clue the magazine. A check of Cruciverb’s database shows 91 EBONYs clued only 8 times as the magazine; the color, the wood, and the piano key approaches are all more common.

Four theme phrases begin with a word that can precede ROLL: I’m sort of on the fence on this one–I liked how the title tied into the entries, but types of rolls don’t excite me as much. I might’ve enjoyed an entry like “DROP AND GIVE ME 20!” if “drop and roll” could be considered here. 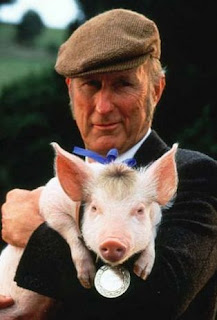 Or how about, “HONOR GUARD,” etc., so that they aren’t all edible. Anyway, my FAVE entry is the fun word APLOMB for [Self-assurance], with the long entries of NEW SHOES and the conversational HOW’S THAT? and IT’LL DO close runners up. In fact, these latter entries could be considered part of a salesperson’s spiel:

Salesman: “Try on these NEW SHOES, although [they might pinch to begin with]”

Customer: “Ohh, these are much too tight!”

Salesman: “HOW’S THAT? [Does this larger size feel more comfortable?]”

I can’t help but think of the movie Babe with that final phrase as well. My UNFAVE was [Proofreader’s “omit this”] for DELE, which seems to come from a past age with its brother STET.

I reviewed this one back in the spring of ’09, on the same day that Joon Pahk had a kickass themeless in the NYT (back in the golden days). Review here. Cute theme: Three phrases start with words that compound with “ball” to form sports, and a revealer ties them together with a bow.

20a, 34a, and 41a are starred so nobody tries to make NEAT FREAK and MORSE CODE (both great fill) fit the theme. “What the hell is neatball? How is Morseball played?” In addition to those two long answers, I also liked VAPORUB a lot, and the EVIL EYE is always fun unless someone’s giving it to you.

Question about 9d: RADIO DJ ([One supplying drive-time music, briefly])—is this one of those retronyms now? Originally, a DJ was just a person spinning records on the radio, I believe. But now there are the DJs who play music at weddings and parties, and the hip-hip DJs, and electronic music DJs.

The short fill tends to the dull side, with your ALEE and ULNA and ENE OLEO RAH ODIE ODIST URIAH.