The theme answers are made by adding -IST to transform a word into an entirely unrelated word:

I like the consistency of having pronunciation changes involved in all four -IST formations. And I’m glad there’s no clunky little theme revealer explaining that IST is added. I got mentally hung up on the clue for 1-Across. [Fare in “blankets”] clues PIGS, but pigs are animals, not “fare.” The “fare” here is called pigs in blankets but it contains hot dogs, not pigs. The fare inside the dough “blanket” is a hot dog. Yesterday someone somewhere was asking if random long fill was the new thing in the NYT crossword. CREDIT RISK and MAIN STREET? Check. I don’t know if anyone not in the sewing, fabric, or curtains business likes to see a clue like 38a. [Sheer curtain fabric]. Do you know how many 5-letter fabric names there are? Here are four: VOILE, today’s answer, is a sheer material that can also be used as mosquito netting. Toile is a thicker fabric with a picture drawn on it, and it has 4 letters in common with VOILE. Tulle is also sheer and used for veils (VOILE is the French word for “veil”—go ahead and try to keep this straight), bridal gowns, and tutus. Ninon is another sheer fabric that can be used for curtains. 26d. [World leader with an eponymous “mobile”] clues POPE. I wasn’t sure Pope Francis used the popemobile but he does. He’ll even invite a friend to hop in for a ride, because that’s how he rolls. (He did dispense with the armored vehicle for driving around town, and drives a 1984 Renault.) Favorite clue: 49a. [Like one texting :-( ], SAD. 3.5 stars.

Those curious about what tied the four theme phrases together need look no further than to 48-Down’s clue: [Accessory in which one might keep the ends of…] or a PURSE: 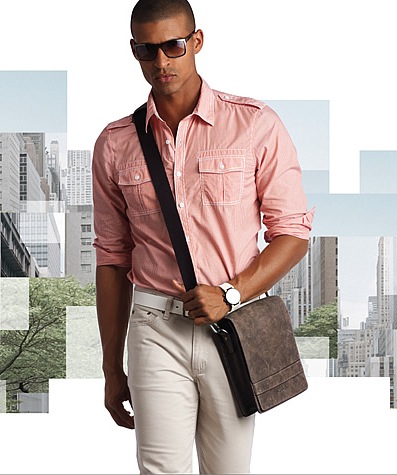 A man with a “murse”

I think the fact that all of these purse items have different meanings in the theme answers is a definite plus, but I do wonder about the timeliness of the theme itself. A modern purse (or “murse” as depicted to the left here) would more likely have a PDA, cell or other electronic device. I used to carry around a messenger bag when I worked in Boston, mainly for my workout clothes as I was able to leave my sneakers at the gym. It was an essential accessory as I used to ride the Hubway bikes from North to South Station where I worked. I was also curious to know if the [Proctor & Gamble dentrifice] or GLEEM was still for sale; I think of it more in the IPANA family than, say, CREST or COLGATE. MACHE or [Chichi salad green] was completely new to me; I see here that it’s a type of lettuce popular in French cuisine. The title is “Pairing Down,” not “Paring Down,” and the long Down answers have an E that’s been doubled to change a word’s meaning. From left to right:

No “odd man out” troubles in the theme—the base word gets split 2 times, stays the same 3 times. First word 3 times, end 1 time, middle 1 time. Base phrases have one word 2 times, two words 1 time, three words 2 times. It’s sort of like that card-matching game called Set—you can match three cards that share a trait, or you can match three cards that share no traits at all. My favorite parts of the theme are the “black mother, peppermint father” family and the mighty beet. I Googled for a beet face picture and I found the Queen of the borscht with a beet head winning a bike race. It’s a 74-word grid but all four corners have triple-stacked 7s so it’s got a themeless-grid vibe to it. Highlights: BRA SIZE plus D CUPS; brunchy MIMOSAS; fresh NUDE PIC. Did not know: 17a. [One way to turn on a snowboard], TOESIDE. Favorite clue: 40a. [Cold and waiting to get drunk], ON ICE. It’s the drink that is cold, not a person. 3.5 stars. Jeff Chen seems to have taken over Nancy Salomon’s mantle of mentoring heaps of new constructors to the big time! Good on you, Jeff! He and Bryan have a stealthy theme for us today. I had no idea what was going on during the solve… Looking afterwards, I see two nursery rhyme characters spelt out on each of the two edges of the puzzle! I’ve never seen a theme like this before! It utilizes eight theme entries: four on each side, but because 4 of these are only six letters long, it only comes in at a hefty but manageable 62 theme letters! The two characters are THE/BIG/BAD/WOLF on the left side and LITTLE/RED/RIDING/HOOD on the right. They’re spelt out in…

With eight entries and 62 theme squares, you would expect solid rather than scintillating ballast fill. However, when you have a puzzle with a novel, unexpected theme, this provides more than enough to make an excellent crossword (even if you only appreciate that after the fact!) PUPTENTS, SCHMO and ENBLOC provide some dashes of colour.

There’s also nothing I can see to complain about. Some people dislike SETI, but I find it difficult to do so, because it reminds me of the classic computer game Civilization, which I fell in love with ca. age 7. SNERD is old, but a few old answers in a puzzle is not in fact a bad thing; lots of old people solve crosswords!

This puzzle is all about the theme, and as you may have gathered I thought it was novel and cleverly executed. 4.5 Stars!

Gareth, leaving you with a cheesy old song for those with long memories!