Lots of nice fill in this 70-worder:

You know why I liked 28a. [“Essays in Love” writer ___ de Botton], ALAIN? Because de Botton sounds like de Bottom and this week I learned that Gigglebottom is an actual surname. I’m petitioning the court to change my name—I want to go back to my original surname but I’d like to hyphenate it with -Gigglebottom.

Based upon the title, I thought we might have five famous people whose first names began with Jackie, Tito, Jermaine, Marlon and Michael, but instead we have people who share a first name with another famous Jackson: 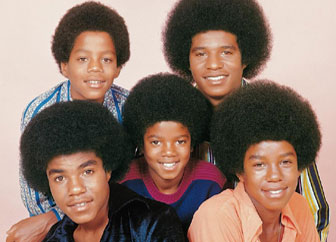 Solid theme with five nice entries. I was a bit MEH on fill such as RESEW, PTAS, MAG and the rather humorous homophones SUI and SOOEY, but felt that the longer fill of MINUTE MAID, GET-AWAY CAR and Jimi Hendrix’s “HEY JOE” more than made up for them. Let’s take a listen, shall we? Tough puzzle, but! The NYT took me even longer, as I had an unusually long Saturday NYT solve this week. So the Stumper loses the title of The Week’s Toughest this time.

Top fill: BRAM STOKER, [“The blood is the life!” penner]; FINAL EDIT, [Last chance to make the cut]; BOOGIED, [Got moving, so to speak]; HOME PLANET, [An alien might miss it]; TEXAS STATE, [“Rising star” of NCAA Division I]; interesting word FESTOONS, [Party hang-ups]; Roy ORBISON, [ “Greatest singer in the world,” per Presley]; and HE OR SHE, [“They” alternative] when “they” is used as a gender-neutral singular.

Gotta run—taking my kid to a dental check-up shortly. Four stars. Nothing particularly exotic or thrilling, but smooth and well-clued and fair. I usually look at the constructor’s byline before solving a puzzle. Not so today. But as soon as I threw down MARIMBA and MARTINEZ, I thought, “Hmm, a Z… wouldn’t be surprised if this is Barry Silk.” One grid-spanning FREEZING DRIZZLE later, my suspicions were confirmed.

As Stefon might say if he were a crossword reviewer, this puzzle had everything: modern references (VIDEOCHAT, POP-UP AD), clever cluing ([Storyteller?] for POLYGRAPH (not a LYE detector); [Shot] for KAPUT; [Screened conversation?] for VIDEOCHAT), literature (The EYRE Affair, OCEANIA from 1984), vocabulary (a deltiologist collects POSTCARDS). And look over there: is that BO DEREK? No, it’s SHAMU driving a MAZDA Tribute.

That’s really all I have to say about this one. Not quite as Scrabbly as many Silk puzzles, but the whole puzzle is really well filled. No gripes and a bit of interested smattered around the grid = 4.1 stars from me. Now if you’ll excuse me, I HEARD MOBY and IRENE CARA were giving RIDES in their MAZDA. (That was AWFUL. I’m SORRY.) Until next week!