The theme is that “tight squeeze” known as a BEAR HUG (35d. [Warm embrace that each of the starred clues is wrapped in]), and the other themers becing with BE and end with AR:

Highlights in the fill include “AMIRITE?” (that’s short for “Am I right?,” and there’s also inorite, short for “I know, right?” Inorite is not a mineral.), REVERB, OUTRAGE atop GET MAD, DA BOMB, INBREEDS, DROP TROU, and SRIRACHA sauce. Oh! And STARFLEET.

Toughest clue for me: 28d. [Letters for Nolan Ryan and Lance Berkman, once], HOU. I gather they played for the Houston Astros? The O was my last letter. I was thinking 31a. [Weed need] was going to be druggy rather than gardeningy (HOE).

Did not know: 25a. [Robert ___, transgender rights pioneer and subject of the documentary “Southern Comfort”], EADS. Never heard of him. Had a tragic ovarian cancer death that was likely hastened by many doctors’ refusal to take him as a patient.

Worst fill: Really, only AH SO (defanged somewhat with the [“I see,” sarcastically] clue) and EERO stood out. This 60-worder does contain a few out-there answers, as you’d expect to see in most low-word-count puzzles:

Fresh (but more familiar to me) fill includes CEREAL BAR, SAM CLEMENS, PUT MONEY ON, BLATHERING, “LIKE I CARE,” Ford ECONOLINE van (my dad had one), and “pardon the offense”/”NONE TAKEN.” MACKS is also fairly modern with the 1d. [Hits (on)] clue.

There are 21 black squares. In the NYT, there have been just 11 puzzles with fewer black squares out of roughly 2,000 themelesses (and about 15 with 21 blocks), so this one’s up in the 99th percentile of low-block puzzles (if you care about such things).

P.S. Peter Gordon sent out a bonus puzzle today, a 1979 Will Shortz “April Fools” crossword from Games magazine. Ha! That puzzle was a hoot. I was able to solve it in full without entering a single letter in the grid. Nifty theme: Four phrases that join “get” with an adverb are interpreted literally, and the GET part of each theme answer is placed accordingly.

I liked figuring out what what going on in this puzzle, and I like that two answers bend into multiple entry spaces and two occupy single entries. Balanced variety is the spice of cruciverbal life.

Will changed them to [the “get __” clues you see here], which is a much easier solve.  I shared this information with my wife, who made some comment like “Oh, I’m sorry that he changed your puzzle so much.” All of this, though, is the prelude to the important part of the story. The next morning, she said to me, “I thought about it, and Will Shortz did the right thing.” Her conclusion was that my original version was unfair because it forced the solver to figure out two different things: (1) that the clue phrases all refer to phrases that start with “get,” and (2) that the resulting phrases indicate how the entry should be placed in the grid. Now, one could agree or disagree with my wife’s contention—I obviously felt differently when I created the puzzle—but the important thing is not her conclusion but the question that brought her there: What puzzle would provide the best experience for the solver? Bravo to her for reminding me that a puzzle is fundamentally about the solver’s experience, not the constructor’s, and that as a constructor, I should always ask that question.

Indeed. Solvers enjoy puzzles that are designed for their enjoyment!

This puzzle seems suited to those who can recall the names of the horses the Lone Ranger and Tonto rode, and even further in most’s memory banks, Dale Evans and Roy Rogers: I could recall Silver and Trigger, but Scout and Buttermilk seem less famous to me. I wonder if anyone born after say 1970 would even know who Roy Rogers and Dale Evans are, except perhaps from crosswords. Funny that all the famous horses today aren’t associated with celebrities, but jockeys. It’s perhaps a better thing that the horses are famous for what they did as opposed to what their riders accomplished. (If celebrities can be claimed to have “accomplished” something, that is.) Anyway, I think I would’ve preferred a bit wackier clues on this one–perhaps implying the possessive on the horse’s name, such as [Roy Roger’s horse’s hoof replacement?] for TRIGGER FINGER, etc. 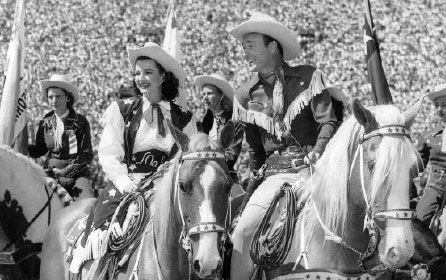 I enjoyed the reference to Ronald Reagan’s preference for JELLY BEANS, but perhaps a more modern reference could’ve been made to the latest release of the Android operating system. (I should’ve prefaced that one with a geek alert, huh?) In fact, the entire puzzle seemed to have an old-timey vibe to it, including the 1907 Cubs poem reference, Tinkers to EVERS to Chance, and [1950s White House name] for MAMIE Eisenhower. Even an INBOX, referenced as a physical [Desktop receptacle] seems out of date with today’s electronic mail systems. The standout, though, would be the dash of physics with the [Particle physicist’s s, p, d, or f], which are ORBITALS. Not sure which each of those letters stand for, any help from the audience? Pretty much blazed through today’s BEQ, the answers filling the grid steadily and evenly from top to bottom, like ooze making its way down a wall. The theme involved adding mo’ JO to a word in each theme entry, like this:

20-A [What an “Avengers” actress uses to blow her nose?] = SCARJO TISSUE. From “scar tissue.” Nice. I bet this was the seed entry.

36-A [Homies standing in front of budget hotels?] = BROS BEFORE HOJOS. Very nice. I had HOJOS at the end of the entry and was nervously wondering what acceptable phrase Brendan would use that ends in “hos,” but this one works (the base phrase is “bros before hos”).

***I had K?? for [Chain with a tepee in its logo] and, although I couldn’t envision the tepee, typed in KFC. It was KOA. This was the only erasure I had in the puzzle.

***[Ronald Reagan or Bono, e.g.] = SIR? I didn’t know Americans could accept titles from foreign governments. Maybe it’s honorary. Correct, says Wikipedia: “In 1989, Reagan was made an Honorary Knight Grand Cross of the Order of the Bath, one of the highest British orders (this entitled him to the use of the post-nominal letters “GCB” but, as a foreign national, not to be known as “Sir Ronald Reagan”)

***[Sacajawea’s tribe] = SHOSHONE. Which reminds of this line from “Napoleon Dynamite” (the guy is saying that he “found some Shoshone arrowheads”):

3.95 stars. And congratulations to Brendan on his Orca, awarded yesterday right here at Fiend. Very cute, early week theme today. Surprising to have it run on Thursday and not say Tuesday in fact. Once you twig to the theme (which for me was very quickly) the theme answers basically filled themselves in! I really like the concept of this one! One big issue I have is that of the six entries, HORNEDTOAD is the only one not ending in the name of a mammal, but an amphibian. The full name animals are consistently inconsistent: 3 mammals, a bird, a reptile and a fish – I liked that surprise factor, the fact that a TITMOUSE is a bird and a SEAHORSE a fish is inherently weird and therefore interesting when highlighted. I’d have ditched the TOAD myself, or found another answer that ends in a mammal… We have: For six themers, the fill is well-contained. One RRN (random Roman numeral), one iffy suffix and a few legitimate if oft-repeated difficult (if you don’t do crosswords) answers. There is also a healthy amount of splash contained in answers like [Title “ungainly fowl” of poetry], THERAVEN; [“Don’t bother”], NEVERMIND; [Identifier in a folder], FILENAME; and [“Tao Te Ching” author], LAOTSE.

3.5 Stars. Very clever puzzle, a real WITOT! Only downside for me was HORNEDTOAD.