Belated thanks to the Team Fiend folks who ran the blog over the weekend! I had the great fortune of seeing most of them at ACPT and I assure you they’re even more charming in person than they are on your computer screen. It was lovely to see a number of blog readers at the tournament as well—the vast majority of any blog’s readers “lurk” rather than commenting regularly, and it was great to hear from them face to face. Hello again!—Amy As can often happen with an easy crossword, I finished this one without seeing what the theme was. Then I started eyeballing the theme answers to put it together in my head. Ah! VERBAL GYMNASTICS is 38a. [Fancy, evasive language … or a hint to the ends of 18-, 26-, 54- and 65-Across], and those end words are also names of gymnastics equipment:

This is a lovely, crisp theme I don’t recall seeing before, and it’s worth the grid expansion to accommodate the 16-letter central answer (itself lively fill) that ties everything together.

LARYNGITIS (which afflicted ACPT finalist Howard Barkin at the weekend’s start) and TORTELLINI are great chunks of fill. I like ASSUAGE, a testy “NOW WHAT?,” and one-vowel PSALMS too. Less fond of SAE and ELLS, but overall the fill is solidly in the Tuesday mode. The toughest fill perhaps is 71a. [Broadway composer Jule] STYNE.

4.25 stars from me. Over and out—time to catch up on sleep after ACPT weekend! 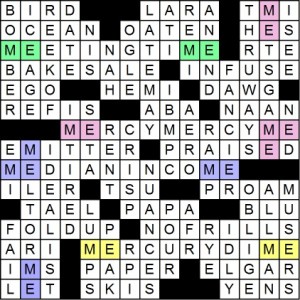 “Mainframes” are those high-performance computers used for large-scale computing. “Maine Frames” are names and phrases in which ME, the postal abbreviation for the state of Maine, begins and ends said phrases. Thus, as the related clue suggested, I checked my EGO at the door, and accepted that this puzzle was not about “me”! Liz has given us six themers today—a strong set made even stronger by virtue of the theme interlock: two pairs cross one another in the grid. Nice. Our creative constructor has also generously provided a (spring) color-enhanced grid to highlight the “frames” in question—and they’d be:

While some of the themers feel more functional (median income, meeting time…) than fun (everything else), the puzzle as a whole is solid and has more than enough colorful fill and cluing to keep me smilin’. Plus this, perhaps, serendipitous bonus right there in the NW corner. In a puzzle that references the state of Maine, how perfect to find a BIRD over the OCEAN, right? 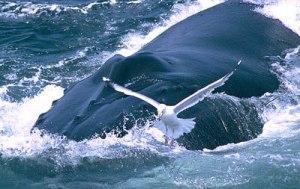 The Maine event: bird over a *humpback whale* over the ocean…

And in any puzzle, it’s a pleasure to encounter an [Event for folks looking for a sweet deal?] or BAKE SALE. (That might be the place to pick up a fresh, homemade CRISP [Apple dessertwith a crumbly topping].) I also loved seeing IDEALIST poetically clued as [Star gazer]; and both FANCIER [More chichi] and its [Bare-bones…] NO-FRILLS opposite. NUANCES, “I’M TIRED,” ICE AGE, PRAISED, INFUSE, and even LATE MAY with its nod to the unofficial start-of-summer—welcome fill all.

The full clue for no-frills is [Bare-bones, like airline travel], which (as I read it) links to [Light airplane material] for PAPER. I mean, airplane material doesn’t get any lighter than that, does it? But that paper also links to what is my fave clue/fill combo today: [Close an origami business?] and FOLD UP. That’s as good as it gets! There are 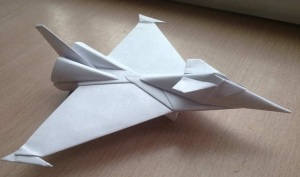 some other fine and/or tricky combos [Cross-country runners?] SKIS, [Top of the heap?]PEAK, [Slangy ending for liter or glitter] ATI (the pronunciation issue makes this one fun)… but I love getting from a no-frills airplane, to a paper airplane, to a fold-up origami airplane, and then to one that looks remarkably like a BOMBER to boot!

Biggest mystery of the day (although I really didn’t see it until I went to write up this post, because it fell into place through the crosses) was NIS [Third largest city in Serbia]. Back to geography class for me! It was the birthplace of Constantine the Great, but otherwise there was little in this write-up that rang any bells for me. Still, that reflects more on my knowledge base than on its being legitimate crossword fill! This themeless is a mixed bag. It’s in interesting-looking 66-word grid (though the 4×7 corners are rather cut off from the rest), there’s some real sparkle, and there are some real clunkers.

The goods: BINGE-WATCH, LAUNCH CODE (which had a clue I liked: [Protected sequence in some spy movies]), and ESTATE CARS stack crossing “I ASK YOU” and NUTELLA. BACKWARDS R clued informatively as [Russian letter that makes the “ya” sound] rather than as part of Korn or Toys “R” Us’s names. “I’LL BE THERE,” song title, near SLICK RICK of old rap. A WEE BIT.

Names I did not know:

Junky fill helping to hold the other things together but bringing me down: SYL, ECT-, WHEN’D, awkward STAINER.

3.5 stars from me, with significant debits for the reliance on obscure names. This is another of those “one word in each phrase can precede or follow this key word” themes, but with a confusing revealer. 64a. [Figuratively, where some wild ideas come out of; literally, a hint to a word and its position when paired with the starts of the answers to starred clues] clues LEFT FIELD, and the word FIELD can precede (appear to the left of) the first word in each themer. People! Don’t put the word “position” in a LEFT FIELD clue unless you want me to think there’s some baseball angle going on.

Favorite fill: DELISH. The inclusion of six theme answers left less room for colorful fill, and the only 7s are both -ED verbs so they feel shorter and less interesting.

I didn’t care for the northeast corners’s ADANO/LAO/OCALA combo and took a minute to replace that corner with BLOCS, ROBOT, ATARI, and MAL de mer (the worst bit, but overall I think my fill’s better than the original) crossing LOT, OBAMA, CORAL, and STILL. I poked around at the RELET/ALACK corner but didn’t find a quick and easy replacement. If this were my own puzzle, I would also have worked to avoid the HST/OAS/UTA chunk.

Theme’s okay, but the general theme type doesn’t excite me (and interestingly, the NYT plans to be publishing fewer such themes, so constructors: you’re on notice to make fewer of these puzzles) and some of the fill was suboptimal. 3.4 stars from me. Good day, everybody!  I hope you’re doing well and, if you’re in the NYC area, staying dry, since it’s raining a little bit here.

Today’s crossword puzzle, brought to us by Mr. Alan Arbesfeld, is definitely making a house call, with 14 separate doctors – fictional and actual – squeezed together in six different theme answers. Can that be the start of a joke?  Fourteen doctors walk in a bar…

Here’s a surprise for those who know me: one of the biggest hang-ups I had was trying to get the Dr. in which the second part just consisted of one letter. After I put in RUTH, I wondered “what real or fictional doctor just goes by one letter?”  Went through the letters, and once I got to J, I immediately wanted to bellow, “Oh, @#%#$, Dr. J, you sports-loving clod!” With all of the doctors shoehorned together, it was fitting that CONDENSE was also an entry (52A: [Shorten]). Had trouble slightly getting the middle letter in AUBER (34A: [19th-century French composer Daniel]), but OBSTET finally clicked in my head as the abbreviation (and its spelling), and that completed the grid for me (30D: [Science concerned with childbirth (abbr.)]). Wasn’t the biggest fan of JOKIER at all, but, given that, I’ll see if I can use that in a sentence to someone in the next couple of days (38D: [More likely to crack a good one]).

“Sports will make you smarter” moment of the day: ANGELL (20A: [Baseball writer Roger]) – One of the great storytellers and essayists in sports journalism, Roger ANGELL has won many honors for his writing, with a lot of his work appearing in The New Yorker, where he was a contributor and editor. Angell was inducted into the writers’ wing of the Baseball Hall of Fame in 2014, as he was awarded the J.G. Taylor Spink Award by the Baseball Writers’ Association of America (BBWAA) in December of 2013.

I’ll see you on top of the Wednesday hump!  Have a good evening…