Last summer, many of us enjoyed Matt Gaffney’s meta-crossword murder mystery. This summer, Victor Barocas has launched a Kickstarter to secure backing for Ada Cross, Crossword Detective—eight short mysteries each with five crosswords to help you crack the case. Across and Down crossword cartoonist Hayley Gold will illustrate Victor’s project. Are you in? I am! The theme revealer is IT’S IN THE BAG, 56a. [“We have this won” … or what could be said about each of the first words of the answers to the starred clues]. Those first words can all precede “bag,” and in particular, each of those things is contained inside that kind of bag. I.e., you may find a book in a book bag, and tea bags, ice bags, and sand bags are defined as bags of those stuff. The book bag is a bit loose, as the typical person carrying a book bag has a lot of other crap in there too. The blurb after the theme says, “the title is the least of your worries.” The title, at least to us wordsmiths, should be annoying in the fact that it isn’t a word! The theme carries this further, as they are all things that can be described as annoying:

Another great puzzle.  Can’t wait for next week’s Jonesin’! Always fun when there are circles in the puzzle.  Or shaded squares, or anything gimmicky for that matter.  The entry at 61-Across clarifies the theme:

Nicely done.  I wasn’t paying attention to the circles until the end, so then I was going back and seeing what was spelled.  Made for a nice solving experience.  3.5 stars.  I usually say, “What a spread!” when I am a dinner guest; it’s implied that there is a nice spread at the buffet restaurant!

This puzzle was fun.  Isn’t that the point?  I just got a library card for the first time in many years, and one of the first books I checked out was From Square One by Dean Olsher.  I had never heard of this book, but he so far is doing a good job of explaining why I do what I do all the time.  If you haven’t read it, I recommend.  Hope to finish it this week sometime.  He does speak about crosswords providing a pleasure point, and this puzzle fit that bill nicely. 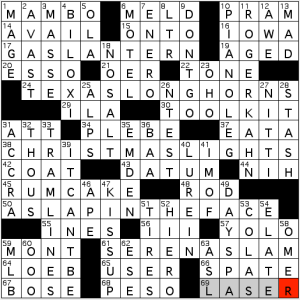 Well, here’s a curious conundrum for me. Today we have a gimmick that involves a set (or “pattern”) of embedded letters. Said pattern relates to a specific type of “speech”—namely, as is revealed at 63D., ASL [Communication syst. that’s hidden in five answers]. And what an expressive communication syst. it is, used by millions in the U.S. Now I tend to enjoy this kind of gimmick. And while I flat-out loved the themers, I was left a little cold by this particular letter set (although I think I know the “why” of its existence…). Is that that I prefer embedded words instead of letter groups? I’m thinkin’ that may in fact have something to do with it. May have appreciated the cruciverbal celebration of ASL more, too, if this were a commemorative puzzle, but from what I can tell, exactly when in the later-first-quarter of the 19th century it came into existence is a bit fuzzy. So much for the diss-ertataion portion of the post. On to those five fabulous themers (occupying exactly one-third of the grid’s white space [sweet!]). All are clued in a straightforward way.

The LANTERN is the part at the top…

The strong fill doesn’t end with the themers (and those other long entries I’ve already mentioned). We get more thanks to PIANO LEG [Steinway support]; the impassioned “DON’T GO!” [“Please stay!”] and “IT CAN’T BE!” [“Good gracious, you’re alive!”] (and wouldn’t ya like to know the backstory on that one…); the crunchy sounding BILOXI, TOOL KIT, KISS UP [!] and RUM CAKE; the heavenly sounding DAY SPA; and another kind of de-stressor, a frozen margarita, with “NO SALT on the rim, please.”

Fave [Factual tidbit] DATUM: [Pres. Cleveland’s bills] THOUS. Did not know that. Did learn that Alexander Hamilton once lived there, and that he, like many others who find themselves engraved on our bills, is not the only one who’s played (and will continue to play) monetary musical chairs.

Does the puzzle have soft spots? Well, yeah. But the less time discussing the likes of the functional (but little fun) OOO, III, OMER, ESE and -OLA the better.

(Bet she enjoys her time at the DAY SPA…) Good morning, people! It’s Mr. Ian Livengood’s turn to provide today’s crossword, and in it, each of the theme answers goes down in the grid, and each start with a word that can also precede the word “market.” Here’s hoping this isn’t a sign that the market is going down today on Wall Street.

Are there any classical musicians out there who want some more ATONAL music out there for consumption (4D: [Like some 20th century music])? Not sure if I can think of some modern atonal music off the top of my head, but, then again, I’m far from the music expert. Might get a little flak for it, but I had never heard of TEVAS (Teva sandals) before (54D: [Sporty sandals]). Though, now that I’m looking them up, I definitely have seen many people wearing them. Don’t know why I had not heard of the brand name. If I’m correct, our constructor recently had an NYT puzzle that had a “five-star” theme, and one of his entries in the puzzle was “Chinese flag.” We have something a little similar going on today, as STAR makes the grid and has a reference to the Far East (26D: [One of five on the Chinese flag]). Pretty smooth solve, and almost junk fill-free.

“Sports will make you smarter” moment of the day: NFL TEAMS (50A: [Jaguars and Panthers]) – Both NFL TEAMS mentioned in the clue, the Jacksonville Jaguars and Carolina Panthers, entered the league at the same time and debuted in the NFL in 1995. Amazingly enough, one year later, the Jaguars and Panthers were both just one win away from setting up a Super Bowl matchup of expansion teams. In the 1996 AFC playoffs, Jacksonville defeated Buffalo and shocked top-seeded Denver to make the AFC Championship Game, but then lost to the New England Patriots. After a stellar 12-4 season in 1996, the Panthers earned a first-round bye, then defeated the Dallas Cowboys in the NFC Divisional Playoff Game. In the NFC title game, however, the Panthers lost to the Green Bay Packers. If two expansion teams had met in the Super Bowl just a year after coming into existence, it probably would have ranked as one of the five most surprising sports feats in the history of team sports, at least in my opinion.