I have to admit I had no idea what the theme was until the revealer, but this is really nice: a fifth, a six-pack, and a case are all units alcohol is sold in. A well-executed Tuesday theme: lively phrases, tight connection, no-muss-no-fuss.

Let’s have a look at some other interesting stuff in this puzzle, shall we?

Did I forget to mention we also get WET-NAP, NABOB, EROICA, IODINE, and DENNY’S (which, by the way, has a top notch social media team)? Oh, and AMOS clued as [Lee with the 2011 #1 album “Mission Bell”]. This fill is So Fresh, So Clean. -ISTS, ANS., and maybe AMICA are the lowlights. That’s really it. The clues are easy but not boring (see, e.g., 1d, LASSOS [Gets in the loop?]). As they say at McDonald’s in Germany, ich liebe es. The blurb says “we’re going to name names.” And that is what the theme is: Famous people’s names with one of the names doubled up and clued in a funny way. A bit campy, but I smiled while solving. Here are the theme entries:

I like it. Took a minute to grow on me. Puzzle not too hard; I actually finished at 1D [“We’re not sure yet,” on a schedule] TBD. I had TBA! Some of my faves: 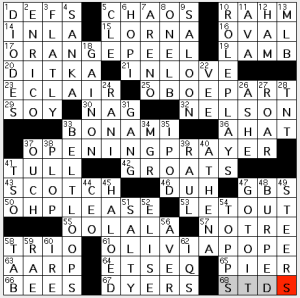 The name’s the same, but the gimmick has changed. Five weeks ago, Liz gave us another puzzle with a “Special Ops” title. It was true then, and it’s true now: “The “special ops” of title does not refer to the military’s special forces, but tips us off to the gimmick in the themers.” Back in June, this was a letter-change theme. Today (August already?!), we get five two-word phrases (all clued in a straight-forward way), the first word of which begins with “O,” the second with “P.” While this doesn’t make for the specialest [sic] of theme sets, it’s quite solid. Just not overly sparkly. It’s a tried and true gimmick that beginning solvers should become acquainted with. And, I venture to say, the remaining fill and clues certainly do their share in keeping things lively. But let me GO TO IT [Begin immediately] with “:ops” first.

So while I’m not IN LOVE with the themers, I like ’em quite a bit—though, even more, I love seeing IN LOVE in my puzz. Especially when it’s clued with [Moonstruck]. Other happy-making puzzle moments came from: the lengthy verticals BELT LOOPS and ROLE PLAYS [Acts out, in therapy]; seeing SALOON clued as a [Cowboy’s hangout] and being reminded that SANKA is a [No-buzz coffee brand]. The name, saith Wiki (citing the OED [where so many entries are DEFS]), derives from the French words sans caféine (“without caffeine”).

FLATLY [In no uncertain terms], I love seeing CHAOS in the puzzle, and contemplating the image produced by [Fall into a chair] for PLOP or the feeling of SALTY sea air on my face, or the sight of Fra Angelico’s HALOED Mary. But my fave clue/fill combos today? Those would be [Napoleon’s rich relative?] for the tasty ECLAIR (and not, say, his great-grandson Oscar II of Sweden…) and the too, too polite (and very funny) [Let the air out?] for BURPED. (When he BURPED at the dinner table, my grandfather was often heard to exclaim, “My shoes’re too tight!”) [Déjà vu all over again? I think I may have mentioned this in some other write-up…]

I don’t think of SCOTCH as a [Tape variety], but as a tape brand. Masking, cellophane, duct. Those are “varieties” in my book; SCOTCH is a variety of whiskey, no? And how long did it take you to realized that the “queen” of [Queen’s subjects] was of the apian sort? Since I wasn’t familiar with [Arctic explorer John RAE], I had some trouble seeing the forest for the BEES. So to speak…

Hope you had a good solve—and will have a good week. Til next time, I leave you with this luscious image of napoleons and their rich relatives: I continue to be pleasantly surprised by the high quality of these LA Times puzzles. This one is no different. The theme is quite neat and clever. It is indicated by the entry at 34A [Motorist’s question … and hint to the ends of 16-. 23-, 46-, and 55-Across] NEED A LIFT. All of the theme entries last words can precede LIFT.

We are all familiar with the phrases FORK LIFT, CHAIR LIFT, FACE LIFT, and BOAT LIFT. Nice and clean. Not familiar with this constructor, but the fill is clean, and there is nothing clunky in this grid.  Some notes:

This puzzle seems quite lively for a Tuesday.  Great job.  3.7 stars from me! Good morning, everyone! Today’s crossword puzzle, brought to us by Mr. Tony Orbach, takes us onto the hardwood to shoot some hoops, all while listening to some vintage songs on the iPod. Each of the five theme answers are titles of songs, but clued as puns that relate to basketball teams currently in the National Basketball Association (NBA).

Gotta admit that there was some pretty tough fill in this grid that I had to really fight through to make sure I got this done. Of those, the adjacent entries of BEING THERE (11D: [1979 movie in which Peter Sellers plays Chance the Gardener, a.k.a. Chauncey Gardiner]) and ISSEI were tough nuts to crack (12D: [Japanese immigrant]). Wasn’t phased too much by the odd letter arrangement that was forming for ‘issei’ when I started to fill in its intersecting entries going across. Actually guessed on the “being” part when starting to fill in that whole answer of ‘Being There.” EOSIN also was a tricky entry, but didn’t have too much trouble with that once I saw EO— appear (52D: [Red dye]). Honestly, I don’t think too many people in sports circles call a team’s substitutes the B-TEAM (6A: [Bench squad]). The term you usually hear for those players is “second string” or “second unit.” I know the Sacramento Kings’ second unit in the early 2000s was so good that they earned the nickname “The Bench Mob.” The only B-Team I really know is the one from The Benny Hill Show…

“Sports will make you smarter” moment of the day: CREASE (47D: [Fold]) – For those who aren’t hockey aficionados, the CREASE is the darkened blue area of the ice around the net where goaltenders reside. In lacrosse, it’s the area encircling the net where goaltenders reside and players on the other team can’t enter until the ball enters first. For a couple of years, the same type of rule applied on hockey, where no attacking player could have his skate inside the crease before the puck entered that area. I can speak for every hockey fan out there that thank goodness that rule no longer exists! (Although, I just saw a video about why the Dallas Stars’ 1999 Stanley Cup-winning goal by Brett Hull was indeed a good goal, even though his foot was in the crease and the puck was not when put in the winner. Buffalo Sabres fan probably don’t want me to post that video, so I’ll let those people find it themselves.)

See you on the top of the hump for Wednesday!