A fount of coins!

Those appear in increasing denominational order. Anomalous (and discontinued):

Spiffy theme, and quite elegantly realized.

Hey there! I’m Jenni. I was a denizen of the old NYT Forum and I’ve been a slavish follower of The Fiend since its inception. And here I am as a full-fledged (if part-time) member of Team Fiend! Thanks, Amy! I don’t usually time myself and I forgot to turn the timer on for this one. I think it took me about 15 minutes. Todd’s puzzle is a contest puzzle. “What five-letter word, whose letters may or may not be found in the gird, is hinted at by this puzzle?” The title is “Into the Void”. Many many thanks to Amy for helping me sort out the contest.  I am not very good at these – I’d probably get better at them if I did cryptics. But enough about me.

All the themers are straightforward, and the connection is obvious. I’ve been told I have a dirty mind, and I did think of a five-letter word that is associated with POLE, ROD, STAFF, BAR and STICK…but Amy pointed out that the title is “Into the Void,” so we went looking for other possibilities. What else is notable about this? Well, there’s that awful crossing of AARNIO and AMEER. That’s pretty grim. Maybe it’s there for a reason? In that same quadrant of the puzzle, I wanted SIGNOR to be SIGNORI – oh! Both of those fit the clue (“masculine title for Italians”.) The word crosses a themer and there’s a black square below (a void! Aha!) Amy wondered why you’d need a filter for a SPA; I know some people call a hot tub a SPA, and you also need a filter for SPAM, crossing STAFF.

So, from top to bottom, the letters “in the void” give us L-I-M-B-O. Yay! The contest transforms a so-so straightforward puzzle with a nasty crossing into a fun, lively puzzle with a crossing that’s there for a reason. AARNIO would have been easier to get if the clue for AMEER referenced the variant spelling of EMIR rather than the MVP of the 2015 Senior Bowl. I guess that depends on whether you prefer crosswordese or sports trivia. In general, I’ll take trivia any day and since that crossing facilitates SIGNOR, which is a contest themer, I’m OK with it. I’m sure Peter and Todd are relieved to hear that.

(and in case you’re wondering, here’s the bubble chair designed by Eero Aarnio) All in all a zippy, satisfying solve. Rather minimalist theme—at least in execution—this time around. 59-across has [Art form in which the ends of 17-, 26- and 43-Across may be used] SCULPTURE.

Admittedly, the revealing clue offers no pretensions to completeness or archetype, but it still comes across as curiously insubstantial. On this category page, Wikipedia lists quite a number of materials (and I notice some are absent, such as light). And on the page for the subject, the classic materials given their own sections are stone, metal, glass, pottery, and wood. And glass seems a pretender there, if you ask me.

Neither here nor there:

Okay crossword, but underwhelming even for a Monday.

Today’s WSJ offering comes from Judith Seretto which anagrams to Just The Editor. So, it’s another Mike Shenk creation. Let’s get to it. Our theme consists of phrases using the first four letters of the Greek alphabet. Theme entries start with these letters (thus, “Letter Openers”). We have:

There’s a lot of testosterone in this puzzle! We have the Hulk, DELTA FORCE (which makes me think of Chuck Norris), and ALPHA GEEKS, which, while not necessarily male-centric, sounds like ALPHA MALES which is. (Maybe that’s why our constructor opted for GEEKS.)

While solving, I had thought, “Surely this theme’s been done before.” Checking cruciverb, I found two instances of this exact theme from Norma Steinberg in 2001 and Joy C Frank 2002. Quite the coincidence that today’s NYT (see above) and the WSJ are both re-hashed versions of previous puzzles. (Mondays may not be the best place to find originality.) However, if a constructor can improve upon a theme or add something new or at the very least, do it better and more cleanly, then I’m all for it. After all, imitation is the sincerest form of flattery.

Anyhoo, our puzzle is very clean with good non-theme material (BEST CASE, LEAD ROLE, WARMED UP, DEAR ME, ADHESIVE, PETER PAN). Not a lot of drivel besides. This would make a very good introductory puzzle for newbies, which seems to be a goal for the WSJ early in the week.

Straightforward and easy, but clean and well-constructed. Nothing to make me angry. Which is good because…you wouldn’t like me when I’m angry. 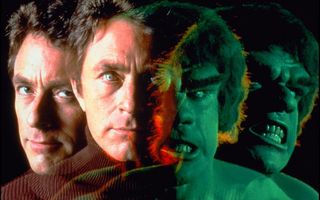 Going to the transplant clinic an hour later than usual, so I have time for a quick review of the BEQ before I go. Solid 66-worder, though I prefer themeless puzzles that spotlight longer fill. The highlights here are PUNSTER, UTOPIAN (great clue: 19a. [One with perfect vision?]), the one-two hit of SEX UP and GO ROGUE, DEEP-SIX, and new unneeded app PEEPLE. And I like FUGLY!

At least the chunks of 7s aren’t packed with boring words, as is sometimes seen in similar grids. Some of the little stuff is blah—SONE, TUNS, POI, Spanish OLAS, awkward IT’S I—but the 7s aren’t larded with prefixes and suffixes or unnatural verb + preposition phrases we seldom use.

Don’t know PEPPA PIG, haven’t seen the phrase UP AND IN before. Not sure if plural LOSINGS is actually used in gambling circles as the counterpart to winnings.

I had only the E in place when I reached the clue, 57a. [Cocktail named after part of an insect]. My first guess was FORELEG. Please suggest the mixologist’s recipe for a drink called the Foreleg—and make it tasty.