Constructor Peter A. Collins, veteran of the NYT and LAT, makes his WSJ debut today with “The Assent of Man” — a well-chosen title hinting at the use of homophones in the theme. (Yes, I know it’s supposed to be “The Descent of Man”, but “The Ascent of Man” sounds like it should/could be a thing.)

35A tells us what to look for: [Acapulco assent (and a phonetic hint to four of the Across answers)] SI SI SENOR. So, taking the first part phonetically and roughly translating the second part, we’re looking for C. C. gentlemen (i.e. men with the initials C.C.). Cute theme and it works, but isn’t this puzzle being just a little SEXIST? I guess SI SI SENORA will be a different puzzle.

I find it interesting that the mens’ names are pretty uncommon. There’s no Carl or Cliff, Chuck or Chad, or Chris or Craig. Nice choices!

Is it foreign language week at the WSJ? Yesterday was Italian, today Spanish. What do we have in store for later this week—Klingon? Dothraki?

Since we’re getting some language lessons, here’s one from our old pals at “Fawlty Towers”.

The grid is stuffed with lots of other good stuff: LASAGNA, BEER CAN, FACETIME, ECSTASY, LET SLIDE, and GOODWIN. ICE FALL is new to me, but I like it. Only a few minor nits like AHS, YDS, and ESL here and there to glue things together. So all in all, a good, solid, easy puzzle with loads of fun fill.

3D reminded me of Patrick Berry’s fabulous Fireball puzzle from last week. So, in that vein, I’ll leave you with this: The theme entries in this puzzle are six 7/7-letter entry names or phrases, and each half has a lot of overlap with its partner. There are two or three doubled-up squares in each one, allowing for the overlap and a compact rendering of each 14-letter answer.

Neat theme. I wonder if it was devised by combing his brain for possibilities, or if a computerized search of 7/7 phrases and names was used.

What else is in the puzzle? Plenty of smoothly Tuesday-grade fill and straightforward clues. The Thursday gimmick took me longer to wrangle than a standard Tuesday puzzle would, of course. Not sure the puzzle is truly representative of “New Ideas Week” so much as “neat Thursday twists.”

One note: 35a. [Kindergartner’s stickum] is PASTE? Not anymore. I hear that today’s kids are all Team Glue and/or Team Glue Stick.

4.4 stars from me. Felt smoother than the typical Tuesday NYT, despite the constraints of the doubled-up squares. 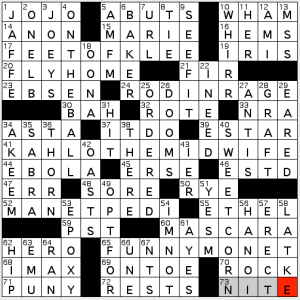 A-pun my word. From the very get-go, riffing on the title of this American songbook classic (by Victor Young and Ned Washington), Liz sets the tone for the whimsy (and groaners) we meet in the five artist-related theme-puns that grace the grid. Some are easier to grasp than others, some have more complexity than others, some a little stretchier than others. All are based on familiar phrases or titles, and all-in-all, in the twisted/twisty ways these beloved artists’ names are used, all are pretty darned smart and funny.

SWEET CORN (that [Yummy ear]—oh, yeah) and ON THE BALL are both terrific in the “longer fill” category; and the fill benefited, too, from FLY HOME and MASCARA.

Not a lot of longer-type fill in the grid, but still, several items to take a look at:

And that, friends, is a wrap for today. If I didn’t speak to your own personal fave(s), speak on up in the comments section. Otherwise, see you next week and happy solving! Nice puzzle today. Another example of the type of puzzle where you have little idea of what the theme is until the payoff at the end. Here are the theme entries:

So the “inside story” in this case is the word TALE hidden in the long theme entries. Nice, and seemingly fresh, idea. Puzzle actually took me a little longer than normal, but my brain is a little fried from working Puzzle Boat 3!

Since said brain is fried, just a couple of notes: I liked STRIP TEASE and A TIME TO DIE as crossing long downs, and there was a reference to Rupert BROOKE at 5-Down, a poet I am not too familiar with. Other than that, fill is pretty straightforward. This is good, because I will probably recommend LAT puzzles from here on out to someone who wants to start out solving. I think this is the description I have been searching for to describe these Tuesday puzzles I am getting familiar with! Nothing too offbeat in these puzzles, usually you learn a fact or two, and the themes are entertaining but not too complicated.

3.5 stars for a clean puzzle with a clever theme. Nice job!

Jeffrey Harris’ Buzzfeed crossword, “He Gives You This Puzzle”—Ben’s review Much like Andy yesterday, I have a Lot Of Thoughts on the new BuzzFeed crossword, particularly as someone in the demographic that BuzzFeed wants to capture the eye of (that would be “highbrow/lowbrow Millenial”, for those of you playing at home). Luckily, he said a lot of what I’d have to say, and I look forward to seeing how Caleb Madison responds to feedback and how the puzzle grows over time.

It’s the first Tuesday crossword in BuzzFeed history. No pressure. Today’s edition is by Jeffrey Harris, who I know I’ve seen across many publications and also know from being in the NPL. If you’re not up with the latest internet trends and slang, you may find the big theme clue in this week’s puzzle a little tricky:

I thought this was a cute theme, and very appropriate for Tuesday in terms of difficulty. As I mentioned, I can see NETFLIX AND CHILL being a sticky wicket for solvers not quite inside Buzzfeed’s target audience here (even I’m not fully sure what “Netflix and Chill” actually means. Then again, while I’m a millenial, I’m also a crossword blogger who uses the term “sticky wicket”). The rest of the fill in the grid is really solid – nothing really grabs me as out of the ordinary for this grid, but I think that’s good – grids like these help you build up your knowledge of frequently-appearing words so other puzzles can go faster.

So far, I’m digging the general tone of the clues (although there’s a general voice of “disaffected 20-something” that feels on-brand, but also a little grating – it’s cute for a clue here and there, but I can see it grating on me over time), but there’s also a wordiness to some of the clues that’s messing with my inclination to speed solve. I love crosswords like the AV Club and BEQ’s puzzles where the cluing isn’t quite as austere and is happy to go pop-culture crazy and even work a little blue. But there’s also a nice succinctness when those crosswords do it that doesn’t break up the flow of solving. I love a good aside or parenthetical (have you read one of my reviews?), but some of the sidebars felt a little ridiculous. 1D‘s “Tinder or Bumble or Hive or Hinge but not love :\” (APP) was short, sweet, and to the point. 28D‘s “‘___ and Me’ (McDonald’s-sponsored ’80s movie that Paul Rudd shows a clip from every time he’s on ‘Conan’ instead of one from the movie he’s promoting” (MAC) felt a bit over the top.

The other thing I found odd about the cluing on the puzzle was that it really felt like the constructor’s voice and the editor’s voice weren’t quite as smoothy merged as they could have been. There are clues that feel like they came with the original puzzle as submitted, and there are other clues that really stick out as having been updated after the fact, like 26A‘s “Noodles sometimes called ‘the caviar of college’ or maybe that’s just me (RAMEN). Still, there’s a lot to like here, and I’m optimistic the things I’m finding to nitpick now can be smoothed out as the puzzle continues to figure out its voice. Hello there, everyone! Today’s crossword is another case of seeing a possible grid idea of yours flash in front of one’s eyes and lamenting that you didn’t work on creating/finishing your grid with that similar idea sooner! Mr. Jeff Chen does an outstanding job with breaking up types of BONES in the grid, as well as having it as the reveal as well (70A: [Skeletal parts, four of which can be found in rows four, seven, nine and twelve]). Though seeing this grid reminds me of the idea I had for a grid, it’s not as painful as having any of the bones referenced being broken in your body. Take it from someone who had a broken collarbone while in high school!

Well, how can I get upset too much about losing an idea for a grid when a theme is executed as well as this? Was left wondering what was going on as I was solving, and only when I got to the reveal that the “a-ha” moment came. Not too long ago, I saw a short documentary on AMISH teenagers experiencing Rumspringa and having to decide whether to live the Amish life for the rest of their lives or be excommunicated from their family (36D: [Rumspringa participants]). Has NO LIMIT ever been clued in crosswords as the record label founded by Master P, a.k.a. Percy Miller (37A: [Texas Hold ’em variety])? Initially put in “mares” instead of SIRES, and it didn’t help that the final three letters are exactly the same (14A: [Stable parents]). Here’s hoping  you don’t come up with a case of ASITIS as the day goes on today (31A: [Under present conditions]). It’s a severe case of inflammation of the lips when saying the word “as” too many times. Oooohh, that’s “AS IT IS!” Never mind!

“Sports will make you smarter” moment of the day: LENDL (30D: [Tennis star who coached Andy Murray])  – His playing career speaks volumes (eight career Grand Slam singles titles, 94 career singles titles), but, during his two-year run coaching Andy Murray, he helped Murray win the Olympic gold in the 2012 games in London, then the US Open later that year. Also, Lendl was coach when Murray won Wimbledon in 2013, the first Brit to win Wimbledon since 1936. The partnership between Murray and Lendl ended in March 2014.

See you on top of the hump tomorrow! Have a great day! Got the puzzle late today, and I was already at work, so the blog post is way behind. As I write, my hometown Cubs are locked in a battle with the Cardinals, so I am a little distracted! Punny entries in this week’s Jonesin’ puzzle pretending a food court is like an actual courtroom! Here they are:

I didn’t get the puns at first, but as I mentioned, I am highly distracted this afternoon. I even had an error, as you can see in the screen shot. The more I am reviewing the puzzle, though, the more I appreciate what is going on. Very nicely done. Some notes:

Another fun puzzle. Sorry for the late post. Back to the game! My next blog post is Thursday’s BuzzFeed puzzle. I will either be in a really good mood or back in wait-til-next-year mode! 3.9 stars.