Quick write-up tonight, as the puzzle was almost an hour late in being released. The theme is ROULETTE, and there is an uncomfortably square “roulette wheel” in the center of the grid. The key things in roulette are even and odd numbers and red and black spaces, ergo BLACK GOLD, RED SNAPPER, EVEN-HANDED, and “ODD, ISN’T IT?” as theme answers.

The word [Homie] has got to stop being used in clues for BRO or HOOD or anything else with origins in African-American slang. You know who uses “homie” now? According to my teenager, nobody. Nobody except white people writing crossword clues?

“BE MAD” (9a. “If you want to throw a fit, fine”]) isn’t really a crosswordable phrase. “Be that way” would be worlds better. The “Var.” tag, never welcome, adorns TIPI‘s clue here. Besides TIPI, there are other things I’m surprised to find in a Tuesday puzzle—ABEAM, ACERB, SANA, SMEE, SAS, ENO. And I’m docking points for OSH, clued with no space between the “___” and “Kosh” because OshKosh is one word. It’s a weird grid for a Tuesday puzzle, with those corners of 7-letter entries being more common for a Thursday.

12d. [Hazardous mailing], ANTHRAX. Sheesh, what sort of mail are you getting, Will Shortz?

I like NICE TRY, DARK HORSE, and PANASONIC. Oh, and MIXTAPE, which is a thing that was huge in the ’80s. The last mixtape I got was a mix CD, about two years ago. There is a rap connotation, with artists putting out playlists of songs and calling it a mixtape. And! Selected Urban Outfitters stores will be selling cassette players and music cassettes to today’s younger generations, who will finally get to learn first-hand about tightening a tape with a pencil in the spool.

Welcome to Mary Lou Guizzo making her WSJ debut! Today she offers up a beautifully-executed theme and a solid, clean grid for our enjoyment.

Mary Lou (along with co-constructor Jeff Chen) was behind the wonderful THE DESCENT OF MAN puzzle which appeared in the NYT just over one year ago and which was nominated for 2014’s Orca Award for Best Easy Puzzle. The idea behind today’s puzzle is similar to that one, so it’s natural to compare the two.

In both puzzles, a three-letter word appears sequentially in five grid-spanning, vertical phrases. Back then, the word MAN descended from the top (in MANIFEST DESTINY) to the bottom in the revealer (THE DESCENT OF MAN). Today, we have a CON rising up sequentially from the bottom to the top. The good: The grid is mostly free from dreck which is pretty remarkable with five grid spanners. Sure, there’s ELS, IRT, BTO, XII, TMAN, RSS, but all that’s acceptable with an ambitious theme. Plus, we’re told to GO FOR IT right in the middle of the grid. I also like FRO-YO and DA NANG (which is just fun to say).

The not as good: CON SEQUENTIALLY is not as good a revealer as THE DESCENT OF MAN. Yes, the CONs are in sequence, but the revealer doesn’t really define what that sequence is as tightly as last year’s puzzle did. There’s not a lot of reason or meaning behind CONs ascending through the puzzle (unless they’re coming up out of the sewers a la “Shawhank Redemption”). Plus, it would make more sense if the revealer was CON SEQUENCE; that would just feel better (but that’s not a grid spanner). 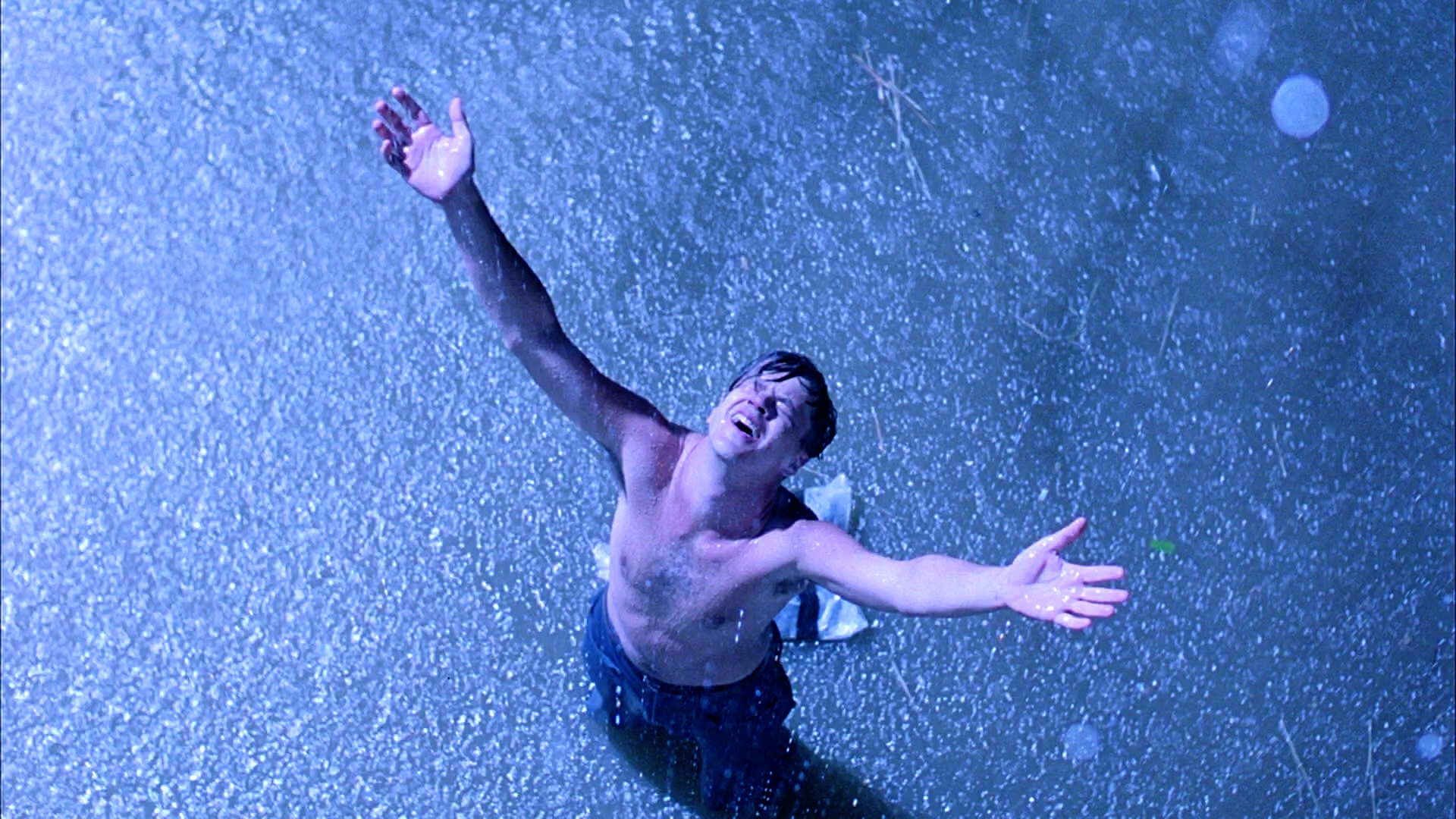 Still, a nice solid grid with an ambitious theme, a fun AHA revealing moment (though not quite as fun as the MAN puzzle). 4 stars from me.

Oh, I would be remiss if I didn’t mention 1D which has the same clue as yesterday’s MAMAS [Half of the “Monday, Monday” singers] but a different answer (PAPAS). Nice.

Oh, by the way. I did a review of all the daily WSJ puzzles to date. There have been 32 puzzles since Sept 14. Of those, 14 were by Mike Shenk’s various alter egos with 1 other that we think is an alter ego (Theresa Schmidt). There have been 2 solo constructions by women (Mary Lou Guizzo today and Debbie Ellerin on Sep 22) and 1 co-construction involving a woman (Tom Uttormark and C.C. Burnikel on Oct 7). The remaining 14 were solo or co-constructions by other men. You can see the disparity; Mike Shenk’s alter egos are getting much too much attention! (Just kidding!) (If anyone wants to see the list of Mike’s pseudonyms, I can put them in the comments.) 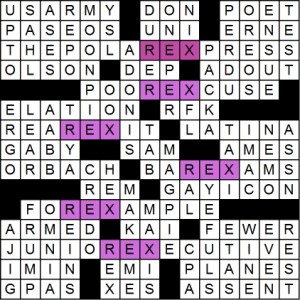 And for good measure, “King me again.”

The”Royal Treatment” of title alerts us—and the reveal at 63D. [Name fit for a king (and a hint to the puzzle theme)] confirms—that REX is the “royal” in question. He’s discreetly hidden in plain sight, too, within six themers (two grid-spanners). Whence the seven requests at the top (more likely to occur in checkers than in chess, where you’re probably gonna promote your pawn to a queen…). But to the puzzle at hand, do note how the theme letters always span two words and are never directly embedded in one word. Classes up da joint!

So, no REX Parker tribute nor Royal Pudding shout-out. Still: tasty in so many ways, with plenty treats remaining to be savored. FOR EXAMPLE: MOONPIE and ADONIS which (in their own unique ways) provide EYEFULS; ELATION, which many folks experience when listening to GAY ICON [Bette Midler or Judy Garland], and others while appreciating straight ICON [Broadway / TV star Jerry] ORBACH; the bratty (indeed) “MAKE ME!”; that excellent [Private employer?] U.S. ARMY combo; and not “The Thieving MAGPIE,” but here’s the Ren and Stimpy (truncated) version just for fun.

Other entries that caught my attention:

TAXI. Why? Well, there it is clued as [Uber rival] and I was feeling so smug, because (though I use neither) I’d remembered LYFT… But ’twasn’t to be. Got me!

Oh—and got me again with REINS [Pulls (in)]. First choice, REELS; then EARNS. I always tend to TEST [Try out] a couple of letters, by checking the crossings to see if I’m on the right track. This one took a little doing.

FRUMP. Now there’s a word we don’t see a lot today. Seems to have had its heyday a hundred years ago, but sometimes it’s the best word to use, especially (as clued) for a certain makeover “before”-type. FRUMP. Almost has an onomatopoetic resonance to it, the way it lands with a dull thud. And then there’s Bud FRUMP, workplace nemesis of J. Pierrepont Finch in Frank Loesser’s How to Succeed in Business Without Really Trying.

And, as always, it’s that “association game” that makes the solving of puzzles an even richer experience, no matter where you draw your associations from: fine arts (DÜRER), sports (XFL), classic R&B ([“TRY A Little Tenderness”]) or classic sacred music (CREDO [Part of Beethoven’s “Missa Solemnis”])—just to name a few.

I’ll go out today leaving you with one final association that ties the theme word REX to classic sacred music. Don’t be afraid! Sang this while in college glee club (maybe you did, too?) and have been in awe of the whole work ever since. From the Berlioz Requiem, the “REX tremendae.” It’s “majestatis” indeed—so til next week, happy listening and solving! Another clever entry from Matt this week. The four theme entries all have the letters “GO” added to a familiar phrase. I always think that clueing these theme entries must be a lot of fun. Or really hard!

As mentioned, FOUR clever theme answers. Sometimes it is very difficult to come up with three decent theme entries, even with an idea that doesn’t seem overly complex. This theme is nicely executed. 4.2 stars for a smooth, garbage-less puzzle. A few notes:

A quick time on today’s puzzle, but it still didn’t seem overly easy. Until next week. Go CUBS! A musically themed crossword this Tuesday from Gareth. Another puzzle where that may not be readily evident, at least not until you get to the entry at 63-Across!

So there is the band Heart in the first entry, with the famous Wilson twins; there is the band Kiss, with the unmistakable gaudy makeup; the band Rush, who I believe hail from Canada; and of course Queen, the band responsible for We Will Rock You, among tons of other great songs. I believe I have mentioned before that it is fun going through the puzzle, trying to figure out what the theme answers have in common, and then getting a nice a-ha moment at the end. Even more fun when they are starred, so you KNOW there is a link somehow!

Good fill, as usual, in this puzzle. Notes:

Nice Tuesday puzzle. 3.8 stars for the nice payoff at the end! GO CUBBIES! It’s another Buzzfeed Tuesday, and with only 2 puzzles, I’m liking the direction the site is going with their themes. This week’s brings a bunch of historical figures back to college and turns them into the frat boys we always knew they were:

As someone who once corrected a roommate that it wouldn’t be BROpolean Bonaparte, but Napoleon BROnaparte (to speak nothing of his chill wife BROsephine), this theme spoke to me in a very nerdy way. There was also a nice symmetry to the placement of BRO in the entries (whether that was intentional or not).

The cluing on Buzzfeed’s puzzles, one of my sticking points last week, seems to be getting better. There’s more smoothness between editor and constructor’s voices, and there aren’t quite as many overly-long clues this time around (although a few of the jokes still come across as a little long – timing’s something that’s hard to do in printed form). One other thing I like this week was the way some common crosswordese is getting introduced in the puzzle in ways that relatively new solvers can start to pick up. 67A’s EDAM gets clued as “Cheese that’s made in reverse?”, a nice bit of wordplay that I didn’t pickup on first pass through. ORAL-B, another frequent entry that’s in this week’s puzzle at 9D, gets an on-brand “(hygiene FTW!)” at the end of the standard “Toothbrush brand” clue that many a puzzle before has used.

If the puzzle can continue to improve like this, I look forward to see what still lies in store.