If you have a question for Will Shortz, he’s recording a podcast for the Times on Wednesday. You can submit your questions here, deadline Wednesday (don’t know what time). Cake! Lots of cake! Liz’s theme is 13d/51d LAYER CAKES, and the circled answers that are stacked in layers are all words that can precede CAKE, all clued without reference to baked desserts. The CHEESEcake and MARBLE cake actually sound like a tasty, if over-rich, combo. CRUMB cake and a SHEET cake don’t go together, and the PATTY-cake doesn’t fit with the rest of the edible cakes in the theme. (Google suggests that Australians call cupcakes “patty cakes,” but the dictionaries seem unaware of anything except the “patty-cake, patty-cake, baker’s man” rhymes.) CARROT cake and SPONGE cake don’t work together as a single dessert, but they don’t have to (and both are delicious).

Given the stacking of all these 5- and 6-letter answers, the fill gets constrained in those sections. You might expect to see some clunky fill that doesn’t fit the “easy Tuesday puzzle” vibe, such as 2d. [Beijing’s river basin], HAI. Other cake crossings that seem a little on the tough side for newbies include EERO, CMD, and UTE, with Latin OMNIA and UNUM (not clued as part of “E pluribus __”) in the outer zone. I like PLUNK but actually tried THUNK or CLUNK first, since the clue (39d. [Drop heavily]) could point at any of these.

… Okay, I’m back from looking at pictures of cakes. 3.9 stars from me. Sop what? The title seems a little strange; at least until you solve the puzzle, then the meaning becomes easily apparent! The flavor text says “time for one letter to go.” That letter is a “T”, so in the title, the phrase being parodied is “Stop, just stop!” Each theme answer is a familiar saying with a “T” removed and punnily clued. They are:

So, not the greatest puns, but they are puns, so you are supposed to groan! 3.8 stars today. I solved this one on my iPhone while I was out, hence the weird picture, but the time was still 6:11, meaning this was likely a fairly easy puzzle. If I can solve that fast with those tiny buttons, I must not be stuck very long! I believe Mark did last Tuesday’s puzzle as well! This is an awesome puzzle in that there are eight thematic entries. That is difficult to do in a 15×15 puzzle. Amy usually counts thematic squares, and there are 60 in this one. By comparison, a 15×15 with three 15-letter thematic entries would have 45. So for a relatively simple theme idea, it came across very well. This is another constructor that I was not familiar with, but seems to do great work! 4.1 stars for a well-executed construction.

The theme entries have to do with state nicknames:

So Tennessee is the Volunteer State, Pennsylvania is the Keystone State, and so on. Again, simple but clever!

The fill is clean, as well. This seems to be a priority with LAT puzzles. ACHS isn’t great, but I do like CAT’S MEOW and IDLE CHAT as long crossing down entries. And as a side note, I am familiar with ANITRA as Anitra’s Dance from Peer Gynt is one of my favorite melodies. Find it on Spotify! And I did notice OPEN ERA as a tennis fan! Hopefully this weather will warm up so I can hit some tennis balls!

Great puzzle. My next review is Friday’s BuzzFeed, and then it is back to the weekend stumpers! Enjoy your week!

A tale of two puzzles is this one, the divider being the long fill from the short. Because this baby has one terrific and fun theme that’s made even better by its execution. But sadly, the grid constraints imposed by that execution create an almost no-win situation for the shorter and, at times, strictly functional fill. And so it goes. Should Liz simply have shelved this one? Nah. The big picture is a really good one.

Today’s “hare-brained antics” are spelled out in the three diagonally-situated themers, all of which reference figurative or literal/literary lagomorphs. To sweeten the pot, one of these (as we learn in the notepad memo) also “…reveals the theme” and lets us know why we’re looking at the themers on a slant. That’s because the theme is the ski-world beginners’

All of which makes for a great theme-driven visual. And I love the fact that while we get a hint of where to look for a reveal and a title to help, none of our furry friends gets a clue in any kind of direct way. It’s up to us to put it all together—which led to a very happy-making “aha.”

Also happy-making are DEEP-SEATED, CREEPIER, BURNING OUT and ROOMETTE. And love the humorous clue/fill combos of [Carrier for bum wraps] (as opposed to bum raps…) and DIAPER BAG, and [“Mom and Dad, I’m low on cash”] which, of course, is coded language for “SEND MONEY!!” Other likable, lively spoken-language fill in the grid would include (the balanced) “NO, DEAR” and “AYE, SIR!,” and also the colloquial “TOLD YA!”

Also coulda lived without “AR”S being clued as [Pirate interjections]. From my, um, extensive research, I see that said interjection takes a two-R minimum and sometimes includes a FINAL “-G” or “-GH.” In the Cruciverb database there are 208 ARS records. One and only one has a pirate reference. I think there’s a reason for that… Will add that I feel sure Liz was looking to avoid the possible duplication with ARTS. Still, ARS coulda been ARI, SCOT coulda been ICON and the not-so-wonderful TOTER coulda been the only-marginally-better NOTER.

Two more things… AGANA. Hmmm. This is the [Former name of Guam’s capital]. Let’s see. I know zero about Guam (not even the present name of its capital [Hagåtña…]) and I’m gonna guess there are not a lot of solvers (especially not the tyros these puzzles are aimed at) who do either. Yes, this name has shown up in other puzzles, but almost always in a challenging late-week grid. And yes, I was able to get it from the crosses. Doesn’t mean I hafta love it!

And then, [“AREN’T WE ALL?”]. This is a most negligible play from 1923 that had only very short runs on Broadway (in 1923, 1925 and 1985), the last of which was a limited-run revival and vehicle for Rex Harrison and Claudette Colbert. As inconsequential as any production of this play has been, it mighta been nice to have given the clue some context, rather than presenting it as an FITB and assuming that solvers have any real familiarity with/connection to the play itself. Because it’s not really likely.

Which brings me to the end of my observations—you’re probably relieved to know! No… I will repeat: I genuinely loved the theme and its execution. That’s fresh stuff and one of the reasons why I—why we—keep comin’ back for more. Keep solving. I’ll do the same and meet ya back here next week!

BUNNY (on) SLOPE at Killington…

Welcome to another episode of “The Archers”, the world’s longest-running radio soap opera. With over 17,850 episodes, it’s been heard daily by the British public since 1951. Oops, sorry about that. Today’s puzzles is about archers, not “The Archers”.

Matthew Sewell presents for us a list of  fictional or legendary archers with the punny title “Take a Bow”. (That’s “bow” rhyming with “go”. Get it?)

This is just a simple list that didn’t have a lot going for it, especially with the inclusion of JOHN RAMBO. I haven’t seen any of those films in many, many years, but I don’t associate him as a character using a bow and arrow. Obviously he must have, but he’s generally pictured as he is to the left. So in my mind, that’s an outlier. 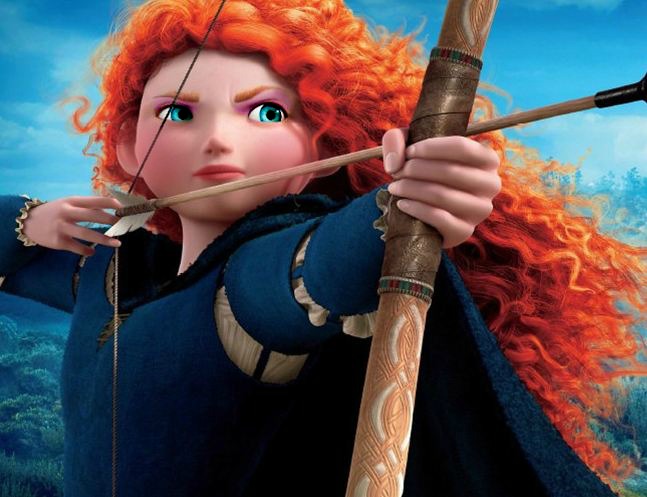 “I’ll teach you not to include me in your list of fictional archers!”

I would’ve rather seen PRINCESS MERIDA in place of JOHN RAMBO, but there was probably no one to pair with her symmetrically.

But I think what saves this list is KATNISS EVERDEEN. What a great grid-spanning entry! I also like OLIVER QUEEN to a lesser degree (not to be confused with Ellery Queen) mainly because the TV show Arrow still has currency. I’m sure some will have trouble with that name since Green Arrow was never the most popular superhero, but it’s a great name in and of itself and the crossings are all fair.

Away from the theme, it’s business as usual, that is to say, solid work. For some reason, I really like that NW corner starting off with BAGGER and TROUPE crossing GULAG and EPIPEN. On the other hand, GOL is quite unfortunate.

I like SOMEONE ELSE at 11D, but the clue doesn’t do it justice [Loafer’s suggestion for handling a task]. I don’t have a better alternative though. It’s counterpart is DENTOPHOBIA which gets a nice misdirecting clue [Fear associated with drilling].

I didn’t know 35D IVY ROSE, and I don’t think it’s a real plant, but I managed to get it with just a few crossings and the helpful clue [Perry Como song with the lyric “Cling to me like a vine”]. It’s counterpart, MARXISM, gets a lovely clue as well [School in which ideally there are no classes?].

Okay. That’s all for today. Here’s Stallone Rambo-ing all over some enemies with just his bow and arrow. Don’t watch if you’re squeamish. Good day, everybody! I hope you’re doing very well. Today’s crossword, brought to us by Mr. Patrick Jordan, definitely hit a soft spot for me. Growing up in the late 80s and early 90s, Saturday Night Live was the dominant force in late-night comedy, but seeing IN LIVING COLOR, and the diversity of the cast of performers on the show was such a welcome sight for many minorities (56A: [1990-’94 sketch show that featured 20-, 29-, and 46-Across]). The three people who make up most of the theme entries in today’s puzzle are just a few of the former cast members who used the show to really launch their careers, a list that includes the creators of the show, Keenen Ivory Wayans and Damon Wayans, the Wayans Brothers (Shawn and Marlon) and former Fly Girl and Dancing with the Stars judge Carrie Ann Inaba.

Outside of walking down memory lane while solving the puzzle, there was a lot of fun fill outside of the themes to definitely keep the interest level up. Not sure how many times I’ve seen EXORCIST in a grid before today, but definitely hasn’t been a whole lot of times, if any (15D: [Demon dispeller]). After seeing “eeler” more times than I would have probably liked, I welcome the change of pace with EEL POT (55A: [Trap for snaky swimmers]). Actually had no idea ACER actually had a slogan for their products, but, then again, I’m probably not going to ever own one of their products since I’m one of the many people that are tethered to Apple (7D: [Explore Beyond Limits” computer company]). Hoping the weather gets better ASAP since I’m chomping at the bit to play TENNIS once again and regain whatever skills I had acquired when I was playing it semi-regularly a couple of years back (4D: [Activity in which love means nothing]).

“Sports will make you smarter” moment of the day: PAULA (48A: [“Opposites Attract” singer Abdul])  –One of the great long-distance runners ever, English marathoner PAULA Radcliffe is a three-time winner of the New York City Marathon (2004, 2007, 2008) and is the current women’s record holder for the fastest marathon time, at 2 hours, 15 minutes and 25 seconds, which she set at the 2003 London Marathon. Radcliffe retired from competitive running just last year.