17-A [Actor who portrayed Newman on “Seinfeld”] = WAYNE KNIGHT, which conceals KENYA in reverse. A nice find.

34-A [It may keep cafeteria food warm] = HEAT LAMP. Malta. Elegant to hide a 5-letter country in a mere 8-letter phrase.

43-a [Billiards variant] = NINE-BALL. Benin. Yet another nice entry and concealment.

So that’s a very nice geographic set, with six theme entries total including the decent revealer.

But the reason every 15×15 crossword doesn’t include six theme entries is because the fill tends to wobble at five and then wobble precipitously at six. Some nice stuff with I SWEAR, BE FAIR, and ONASSIS instead of Ari, and similarly HAGEN with Uta in the clue. But then also a lot of non-Monday fill: NSEC, -ISE, URI, HIED, OR BE, ON A, ugly O-WAR, abbrs. SSNS and ACCT, and prefix GASTRO-. A little rough for the first of the week.

The constructor swung for the fences with six theme entries, though removing CLEAR SIGN (slightly iffy phrase, green paint-ish) and placing PLAYBILLS across the center would’ve left a nice set of four 5-letter countries + revealer and let the fill breathe more. But I understand the temptation to include your one 6 here and have made the same decision in analogous situations myself.

We’ve seen this byline numerous times—always in the WSJ—which leads me to believe it’s a pseudonym for editor Mike Shenk. I don’t know if we’ve come to consensus on any anagram, but I’m making the command decision to go with “Real Fiendish” (using Daniel instead of just Dan), because (1) it makes a good anagram and (2) it’s a nice shout out to a certain crossword-loving blog.

Oddly though, puzzles with this byline are not necessarily all that fiendish. Today is a case in point.

We’re given the potentially hot-button title of “Race Relations”. Turns out, all the theme answers have a synonym for or a type of running race at their ends. 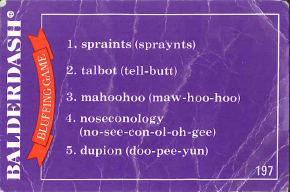 Sample card from the original BALDERDASH board game

With only three main themers, you expect the grid to be squeaky clean. And it pretty much is. We have a couple non-theme 8s in the Across direction (SENTINEL and TOMATOES) and some great Downs (TRIPLANES, EBENEZER, LOVE ME DO, and ILL AT EASE). Other long Downs are solid, just not as exciting (ENCIRCLE, CABBAGES). I also liked BAD DOG and MA BELL.

Not much else to say. A solid, simple Monday offering cleanly executed. Good morning, crossword lovers. Before getting to today’s grid, I want to mention a couple of things. First, I was so thrilled that my schedule ended up allowing me to attend the American Crossword Puzzle Tournament, and it was, as it always is, one of the best weekends I’ve ever had. Also, I was extremely flattered at the number of people at the event who introduced themselves to me (and vice versa) and shared their appreciation for my blogs here on Fiend, specifically mentioning their gratitude and interest in the “sports will make you smarter” part of the blog. I know many solvers end up doing many of the other puzzles we review on a daily basis and may not get to the CS/WaPo puzzles for an assortment of reasons. Also, I know that a fair bit of crossword solvers don’t follow sports regularly and/or couldn’t care less about sports. So to hear that people do take an interest in my attempts at sports edification through crossword puzzle entries really blew me away! Thank you, and I’ll continue to try to be as entertaining and informative for as long as my health – and my sports-reporting schedule – allows me to do it!

I came across something online that there’s a good chance that Tom Cruise will be in the remake of TOP GUN, which made me feel as if I had been living under a rock since I had no idea that any sort of remake of the movie was in the works (48D: [1986 Tom Cruise blockbuster]). On a related note, all these remakes in Hollywood now are driving me insane! I’m sure you’ve all come across different types of horses mentioned in crossword puzzles, but I’m sure this is the first time I’ve seen DOBBINS in a grid (46D: [Farm horses]). Probably my favorite fill of the grid was one that’s a partial, DIAL M (34D: [“______ for Murder”]). Haven’t seen the movie in a long while, but need to do so again real soon! Oh, and one of the main characters of the movie, Tony (Ray Milland), was a tennis player, which makes this a perfect segue to now talk about sports!

“Sports will make you smarter” moment of the day: 4 4 4 4 (Todd McClary’s CrosSynergy/Washington Post crossword puzzle title – April 4, 2016]) – Here’s a twist! Today’s moment is derived not from an entry in the grid, but from its title. Reading the title of today’s puzzle, “4 4 4 4,” reminded me of the words uttered by the late, great basketball Hall of Famer Moses Malone, who, when asked by a reporter for a prediction of how his 1983 Philadelphia 76ers, a robust 65-17 during the regular season, would fare in the NBA Playoffs that spring, said the now famous line, “Fo’, Fo’, Fo’.” That was in reference to the maximum number of games his team needed to win to advance in each playoff round (four) and the number of rounds the team would have to win to win the NBA championship (three). He almost was spot on. After a first-round bye, the Sixers swept the New York Knicks in the conference semifinals, defeated the Milwaukee Bucks in five games in the conference finals (Philly lost Game 4 after going up 3-0 in the series), then swept the Los Angeles Lakers in NBA Finals.

Thank you very much once again, and have yourself a great rest of your Monday! Oh, and enjoy Opening Day of the 2016 Major League Baseball season! So the day after ACPT weekend, Brendan serves up a 19×19 themed puzzle instead of a Themeless Monday. This one originally ran in the business publication Fast Company in December. The theme is puns that include the names of tech-affiliated businesses:

Felt like there was more overly crosswordy fill (particularly names that aren’t household names, like EMILE Durkheim and ADLAI Stevenson, plus ERSE) than you’d expect to see in a puzzle for a magazine audience that maybe isn’t accustomed to seeing a regular crossword. (Though maybe Brendan has a regular gig there? Dunno.)

At least HULU, LYFT, and SPOTIFY are all current tech-related businesses. Hello there, LA Times crossword fans! My deepest apologies for this review not being up earlier in the day. But definitely consider this your (way) AFTER DINNER review, as each of the first four theme entries is a multiple-word phrase in which each of the first words in the phrase can come after the word “dinner,” as the reveal, and its clue, alludes to (58A: [When one might have a mint…or where the first words of 18-, 24-, 37-, and 48-Across can be found]).

Funny thing about seeing DARLA in the grid today is that I looked up the cast of The Little Rascals a few years back to familiarize myself with the real people who starred in the show, as well as their character names (2D: [“Our Gang” girl]). Turns out that Darla was played by a girl whose real name was Darla (Darla Hood). There’s a little crosswordese that takes a bit away from the puzzle, especially that of TSE (64A: [Mao ___-tung]) and ENOW (25D: [Sufficient, in poetry]). There’s a couple of references relating to taking to the skies, with GLIDES (21D: [Flies like a seagull]) and AVIATE (19D: [Fly]). That’s fine with me, but I usually don’t like to see synonyms in the grid as two separate entires. I’m sure almost everyone else wouldn’t mind it. This was a grid you should have been able to WALTZ through in no time (50D: [Dance in triple meter]).

“Sports will make you smarter” moment of the day: SALMON (6D: [Upstream swimmer]) – This entry is the perfect one for this section, since it involves an athlete who spent his entire professional career in Los Angeles. Tim SALMON is one of the best baseball players to ever play for the California/Anaheim/Los Angeles Angels, as he burst onto the scene in 1993 by winning the American League Rookie of the Year award. Here’s an interesting bit of trivia: Of all of the players in Major League Baseball history to start his career after 1933, the year of the first All-Star Game, Salmon has the most career home runs (299) of any player who never appeared in the Midsummer Classic. At least he has a World Series to his credit, as he hit .346 with two home runs in the seven-game World Series victory over the San Francisco Giants in 2002.

Thank you once again, and my apologies to you again!