Today’s NYT theme: phrases answering versions of the question, “What is it?”

While I enjoy that “it” is defined in different senses such as a title, part of a phrase, and a standalone entity, but definition themes seem to lead to duller entries like STEPHEN KING BOOK. I might still be recovering from ACPT, but this theme doesn’t quite do it for me.

Fill is much more interesting in my book, but the pop culture references are pretty dated, save golfer PAULA Creamer. Otherwise, I especially enjoy PARTY HAT, MEERKAT, and DESSERTS. Do people use “toke/TOKED” as a verb compared to “take a toke”? Also, I don’t live too far from the Chesapeake Bay area, but OYSTER CRAB is completely new to me. Instead of a picture, I’ll include a link to a description here, in case the thought of looking at a tiny squishy crab crawling around a raw oyster that people also eat raw makes anyone squeamish.

Favorite clues: [One who may finish on a high note] for SOPRANO, and [Take a turn for the worse?] for SPOIL.

Finally, thank you to the Fiend readers who said hi to me at ACPT! Crossword people really are the nicest bunch.

Looks like we have a genuine debut today! At least in the WSJ. John Dunn’s had several published puzzles in the NY Times and LA Times, but as far as I can tell, this is his first here.

His latest puzzle was nearly two years ago in the LA Times, and prior to that, it was another nearly-two-year gap since his previous one. So perhaps we can be forgiven if we didn’t recognize his name. But I hope he produces more frequently from now on, because he can put together a really nice grid!

I had a look at some of his previous puzzles and they were all really strong thematically. Often, they were Monday puzzles, so not complicated, but elegantly put together with a nice turn of phrase giving us the clue we need to crack the code.

Today’s is vintage Dunn then. We have a great, evocative title which tells us exactly what we’re going to find, i.e. phrases where the last word is a synonym for “bang”. What a fantastic set of themers—all of them unassailably solid and in the language. The sound aspect of each phrase makes it lively and expressive.

I will say that FINAL REPORT, while I like the play on words with the double meaning of REPORT, just isn’t as strong as the others. The others have an aspect of onomatopoeia—CRACK, BLAST, and BOOM being the best examples of this. It strikes me that FINAL REPORT would have made just as suitable a title as “Going Out With a Bang”. It would have been so much nicer to switch those. “Final Report” makes a better title because it’s that much more ambiguous, whereas GOING OUT WITH A BANG makes a better fifth entry because of its onomatopoeic conclusion. But the symmetry gods must be obeyed and there is no way to get GOING OUT WITH A BANG to work with the other themers even if you switch the first word to GO or GONE.

It might have been possible to use THE WHOLE SHEBANG as another grid-spanner in place of FINAL REPORT. But then that would mean GIVE IT A SHOT would have to go in the center of the grid as an 11-letter entry and that would have made the grid much tougher to fill with a lot of theme material. I have no doubt the grid would have suffered.

But as it is, this grid is lovely and clean, so I’m confident John found the best possible configuration for this puzzle. As evidence, we’re treated to such non-theme fill as TAKE A STAND and HOUSEWIVES (clued as [Desperate group in a 2004 TV series]). 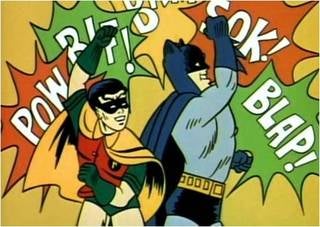 I quite like the top left corner with BATMAN, ARIANA, ANIMAL, and NATIVE. BATMAN makes an especially wonderful starter to the puzzle, and at first I thought he was part of the theme because of the old TV show and BATMAN‘s penchant for fisticuffs. Whether he was added intentionally or not, it’s a great beginning to the grid. LAMBS and their ewes on Weatherhill Farm

All this goodness came to a stop in the SW corner though. I had LOWER THE BOOM, ACID, and HOUSEWIVES in place but nothing else. LAMBS wasn’t coming to me (the clue [Innocent ones] had me only thinking LADS or LASSES, despite me living on a farm where it’s currently lambing season), I didn’t know why Schubert would be known for OCTETs, I don’t know the MTV show Catfish, couldn’t get BEE from just the ending E and the clue [Worker in a garden] (I had ANT in there at first but didn’t make the leap), and the clue for STS [C and D, in D.C.] was late-week-hard. So I just stared dumbly at that corner for what seemed like minutes. Finally I figured the letter preceding the V must be a T and that gave me OCTET then BEE then LAMBS. Whew! All the difficulty was in the clues which, to me, felt much tougher than the rest of the grid.

I have since learned that Schubert isn’t necessarily known for OCTETs, but for one OCTET in particular—the OCTET in F major. And Catfish has an interesting premise, i.e. discovering the real truth behind online relationships.

A couple final clues of note:

Despite my difficulties in certain areas, this is a really fantastically-constructed grid. Hope to see more from you, John. Good morning, people! Today’s crossword puzzle is brought to us by the newly-minted B Division champion at the 2016 American Crossword Puzzle Tournament, the A-LISTer himself, Mr. Doug Peterson (40A: [Elite group of celebs]). In the grid, each of the four long down entries is a multiple-word answer in which the first word, residing higher in the grid, is also the name of a prestigious American university.

Though there are four universities that are the focus of the grid, there’s a “hidden” theme entry that also is a down and resides high up in the grid: the University of TOLEDO (6D: [Spanish province or its capital]). You think there are reproductions of El Greco’s “View of Toledo” hanging up in lecture halls and dorm rooms across the campus? Probably not, but one can hope! This marks two consecutive days that we see the presence of the ever so common entry of ZEBRA in a grid (53A: [Serengeti grazer]). With more and more gray hairs sprouting up on my beard in the past year, there could be a time where a DYE JOB is in order, especially since I think I actually look older when I shave my beard clean off (10D: [Colorful salon service]). I thought I had my “sports…smarter” clue all lined up when filling in AENEAS, as I was going to get ready to talk about the 2014 Pro Football Hall of Fame inductee, Aeneas Williams (69A: [Trojan War survivor]). But one of the crossings to Aeneas, I thought, would be a better fit, especially since this common crossword puzzle fill word can be given this alternate cluing…

“Sports will make you smarter” moment of the day: BAAS (59A: [Meadow bleats]) – A consensus All-American center while playing at the University of Michigan, David BAAS went on to play nine years in the National Football League, starting his career with the San Francisco 49ers after they drafted him in the second round of the 2005 NFL Draft. After six years in the Bay Area, Baas signed with the New York Giants before the 2011 season, and he was the starting center on the Giants’ team that defeated the New England Patriots in Super Bowl XLVI. Okay, before I dive into this week’s themeless puzzle, let’s take a brief detour to talk about the bonus AVCX puzzle set that was released for this weekend’s ACPT.  I freaking LOVED both puzzles, especially the ridiculous cluing of puzzle #2 (like pasting a generous portion of the Wikipedia entry for LYE as its clue), and the meta was the exact type of thing my Mystery Hunt brain is honed for (see also: Friday night’s event, where Neville Fogarty and I were the first two-person team that wasn’t Tyler Hinman to finish all the puzzles).  All in all, it was a clever puzzle set that played up the whole USA Today hubbub and made for fun between-ACPT-puzzle solving.  Well done, Francis and Ben!

Okay, onto today’s AVCX Puzzle, the 6th Themeless puzzle the AV Club’s sent out.  I can’t believe I’m saying this, but Kameron’s themeless puzzles for the AV Club have made a themeless enjoyer out of me.  I’m now solving through his HIGH:low backlog because these are so amusing and good and challenging.  The stacks on this one are magnificent, with BYE FELICIA, MODERATELY, and IGGY AZALEA (who we as a nation have thankfully seemed to say BYE FELICIA to, given the tepid response to her latest single) in the upper left, and MANSCAPING, EROTOMANIA, and NANOSECOND in the lower right.  This was such a beautifully-gridded puzzle, ya’ll.  An absolute pleasure to solve.

For those less familiar with the origins of BYE FELICIA, here’s the clip from the movie Friday where it originates.  You can also see Ryan Seacrest and Nicole Richie discuss it about as whitely as I can here.

So much good fill, you guys.  So much challenging, good fill. I don’t feel like I get time (or inspiration) to make puzzles much any more. I still have the odd puzzle sitting in various hoppers. This one started with the theme revealer: RINGCYCLE. The cycle starts at INGR, then NGRI, then GRIN then RING. These are found in SKINGRAFT, JOHNGRISHAM, SKATINGRINK and the revealer. I wasn’t too happy with SKATINGRINK, which seems tautological, but there weren’t many other options that worked there…

PS, watch this! Someone (here, perhaps?) introduced me to it and it’s fantastic!