I payed next to no attention to the circled squares while solving, and filled in the revealer via the crossings and never saw the clue till after I finished the puzzle. 36a HEADS UP is [Warning appropriate for this puzzle?], and the circled words read upwards can appear before “head” to form a word or phrase. OVERhead, the BOWhead whale, EGGhead, insulting AIRhead, ACIDhead (which I think fell out of fashion decades ago), WARhead, DRUMhead, insulting BONEhead and PINhead, POThead, and REDhead. What, no SKINhead crossing NEATNIKS or BEATNIKS?

Other than the revealer, nothing else thematic involves the clues. So putting aside the circled letters, this plays like an unthemed, not-too-hard puzzle. I expect to feel some theme while solving a Tuesday puzzle! The Cubs beat the Cardinals Monday night, so of course the “W” flag for a Cubs win is up. I didn’t get the theme right away, but after looking at this for a bit, it is actually pretty clever. The title is a homonym of “air guitar,” but you knew that already! I thought that there was a part of a guitar in each entry, and I was going to carp that all but one are the latter part of the entry, but in fact all of the thematic entries are DESCRIBING guitar parts that simply would not work! Here they are:

So a guitar neck made of leather would obviously not work, and so on down the line. Very clever! It took me a second, but that is not a bad thing. An entertaining theme; 3.8 stars today.

Matt is a pro! Until next week! This eff-ing puzzle has TEN theme entries! I am not swearing; all the thematic pieces are two word phrases with the initials F.F. Here they are:

Very impressive! Here in Indiana, I cannot say I have ever heard someone use the term “in fine fettle,” so that is my only major gripe. You can see from the screen shot that I had an error in that section, as the movie Emil and the Detectives is not familiar to me either. But hey, it’s a DISNEY movie, so of course I wouldn’t know it! High marks for TEN theme entries; slight demerit for one of those being obscure. 4.2 stars altogether!

Great puzzle for a Tuesday. I’m not sure what the record is for theme entries in a 15×15, but this one impressed me greatly. Until Saturday!

Just when I thought the title was punning, telling me this would be a puzzle with themers rich in Cs and/or Ts, I discover the real puns are in the fill itself. That said, the title does provide a clue to the marine-life connection that unifies the (decidedly groan-worthy) groaners we meet today. And if puns are not your thing, Turn Back Now! ;-)

Okay, not a mako, but (perhaps more fittingly) a WHALE SHARK statue… (No monuments. Yet.)

I wish I could be as enthusiastic about the remainder of the puzzle as I am for the way the “seafood mama” themers play out. PUPPETEERS is terrific fill and well-clued with [Their jobs may have strings attached], but the impact of its grid opposite “IT’S ME AGAIN…” [Repeat caller’s voice mail] is diminished considerably by the [“I ME Mine” (Beatles song)] (repeat) crossing. Yep. That’s ME crossing ME. Oh, and then there’s “AH, ME” in the corner below. [“Such is life”] indeed. But a three-peat (a ME-peat)? No, thank you.

We get four sixes, but only SPIELS “sings” to me. And both [Is because of] and OWES TO fall flat for me, because neither one works well without other language to provide context. Among the fives, “SKOAL!” and WISER make for lovely fill, but please don’t tell me a word like RESEE floats your boat. (I know there’s precedent for it—in crosswords—but who actually uses this word?)

Then there’re all those proper names. Some sixteen of ’em. Thank goodness for (the longer) ARIANNA and (the fresher, more scrabbly) SEIJI, but “YIPES!,“ neither the tennis pair of BORG and ASHE, nor KEN (Burns of Jackie Robinson fame), nor the recently deceased PAT Conroy (The Great Santini, The Prince of Tides, etc.), nor TYRA, nor RAES [Charlotte and John], nor old standbys ALAMO and ETNA do anything to add some sparkle. I understand about grid constraints, but I hafta believe that alternate fill coulda been found. “DUNNO…” Many solvers love to see lotso names in a puzzle. Me? I love a good name or two—but I generally prefer fewer (and fresher) names than those we get today. Too many and a puzzle starts to feel DRAB to me. When there’s a strong theme set (like today’s) this lack of lively fill to match comes as a disappointment. As always: your mileage may vary!!

On the other hand, loved the punny [Emulated King Kong] APED combo (this one sets up many levels of imagery) and the potentially twisty [Really fancy] for ADORE, “fancy” being a verb here and not an adjective. Nice wordplay!

And that’s a wrap, folks. Keep solving, keep coming back, and we’ll do this again next week. And, don’t be shy about speaking out in the comments section. Always useful to have solver/reader feedback!

Debbie Ellerin has had quite a good year crossword-wise, since her NYT debut about 13 months ago. In that time she’s had three LA Times puzzles (including last Saturday’s which was gorgeous) and three WSJ puzzles (including today’s).

This one’s a beauty, too. A simple but well-executed theme with plenty of yummy non-theme fill. Let’s check it out. The letter P, L, O, and T are “twisted” (i.e. scrambled) in the four main themers. Bonus points for having them all twisted in different ways. (Minor demerits for the extra adjacent Ls in two answers, but this is a nit.) 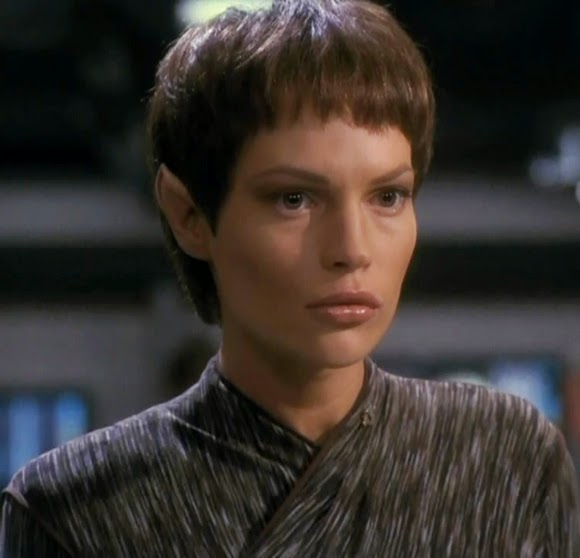 TPOL sounded familiar to me, and I was right. T’POL was a Vulcan character on TV’s Star Trek: Enterprise played by Jolene Blalock. Not to be confused with the Vulcan elder T’Pau from the Classic Trek episode “Amok Time” who officiated at Spock’s wedding (or T’Pau, the Britpop band named after the Star Trek character and which gave us “Heart and Soul” in the ’87). From my work in the communications arena, I know POTL as Plain Old Telephone Line. I tried, but I couldn’t find anything useful for TOPL or LPOT.

But back to our puzzle: It’s not easy to have a 13-letter central themer. It limits what you can do with all four corners. You either have wide open 7-letter-down (or longer) corners (tough to fill) or stunted 3-letter-down corners (boring for the solver). Debbie avoids most of this with the use of the “cheater square,” the block above SEES IN at 44d and its corresponding partner below ADWEEK. This allows her to put two more blocks next to the cheater square and limit the NE and SW corners to 6-letters Down. In the opposing corners, she went with two blocks creating some shortened fill in the extreme corners, but leaving a couple longer 8-letter-entries in place (the lovely DAYDREAM and EXHIBIT A). This strikes me as the best compromise overall and allowed her to fill the rest of the grid with really great stuff.

For example, we get DVORAK (29a, clued as [New World Symphony composer] and not [Tech writer and podcaster John C.]), POKEMON, INDIANA (22d, [Henry Jones Jr.’s nickname]), the aforementioned EXHIBIT A and DAYDREAM, as well as PAD THAI and PAELLA to go with the CHIPOTLE SMALL POTATOES (see, I told you they were yummy).

I also liked ALPHA next to OLLIE, the JAPE/JUTS crossing, ON TOUR, ARTSIER, and the TEXACO/ARCO connection.

22a EMERITA is also great but it made me pause. The clue is [Part of a retired prof’s title, maybe]. I was thinking, dumbly, that EMERITA was the plural of EMERITUS, and therefore either the clue or the entry was in error. Turns out EMERITA is the feminine form of the Latin word EMERITUS—like ALUMNUS/ALUMNA. Once I figured that out, I liked the clue even better for its lack of gender-specificity.

The RERUN clue (23a, [Any “Seinfeld” episode, now]) seeded my brain with that show, so when I got to 34d [Jerry’s nemesis], I naturally wanted to squeeze NEWMAN into a 3-letter entry. Turns out the answer was TOM. NEWMAN! *shakes fist*

One more clue of note: 40d is SEAN [Audrey’s “Robin and Marian” co-star]. That’s Audrey Hepburn of course and SEAN Connery (who also played Henry Jones Sr. from the clue to 22d). I never knew Connery and Hepburn were in anything together. Sounds like it might be interesting, especially seeing as Robert Shaw (Quint of Jaws) is the Sheriff of Nottingham. (Shaw and Connery also worked together in From Russia with Love, of course.)

Okay! Anyhoo, you can see it was easy to get side-tracked with all the good stuff in the puzzle and I’m still in a good place from it. A very entertaining puzzle! CrosSynergy/Washington Post crossword solution, 04.19.16: “A River Runs Through It”

Good afternoon, everyone! Today’s crossword puzzle, brought to us by Mr. Alan Arbesfeld, is a form of progression in which the letters NILE, which appear consecutively in the theme entries, shift further to the right of the grid with each passing theme entry going down (69A: [River that runs through the answers at 17-, 23-, 37-, 54-, and 62-Across])..

This grid gets an extra star from me just for the presence of The SS MINNOW, something I know I’ve never seen in a grid before (39D: [Shipwrecked ship in “Gilligan’s Island”]). There’s a pretty good chance that, once I get back home, I can find the DISCMAN that I used when I was in high school and in my freshman year of college (40D: [Sony music player introduced in 1984]). Now thinking about it, Im kind of weirded out that I possessed a Discman while I was on college, even though this was before Napster, the MP3 player and/or the release of the Apple iPod. I guess the clue for CENTAUR needed the question mark, but it wasn’t that much of a mislead at all (11D: [Mythological horseman?]). Was the stacking of DEVIL (28A: [Pitchfork wielder]) and CAKE a sign that I should have Devil’s Food Cake as dessert tonight (35A: [Pastry chef’s creation])? If so, then all I have to say is that I don’t need a sign to satisfy my sweet tooth! I’ll get on that in a few hours!

“Sports will make you smarter” moment of the day: ELMIRA (32A: [City where Mark Twain is buried]) – The first African-American player to win the Heisman Trophy, Syracuse University’s Ernie Davis (won the award in 1961), was nicknamed the ELMIRA Express, as he spent his teenage years growing up in the Central New York City. Davis played a key role in Syracuse’s national championship in 1959, as he was he MVP of the Cotton Bowl game (on Jan. 1, 1960) against Texas to cap off their championship season. Though Davis was the No. 1 pick of the 1962 NFL Draft by Washington, he never played in the National Football League, as he passed away in 1963 after being diagnosed with leukemia.