I like the theme idea, and I like learning new things. It would be great if taking on a male or gender-neutral pen name was not necessary for a lot of good books to get publishing deals, though. Emily Brontë’s pen name is new to me, and I had not heard of ANDY STACK or Anne Rule. This caused me problems in the SE corner, as I had ITHACA instead of ITASCA and had to guess a little on the S after I realized [Fashion editor Wintour] was either ANNE or ANNA and not ANNH.

The fill has some interesting bits, such as HAIKU, Via VENETO, BARONY, and RIPSAW in particular. I’m not in love with entries like BEDIMS, MINIM, or MLI (or any Roman numeral, really).

Not much else for me to say about this puzzle. I was going to write a HAIKU to include here, but I’ll spare you all. Instead, here are some pretty CIRRI. They’re having trouble over at the WSJ puzzle website (it wouldn’t even load the puzzle at all this morning), and recently, their iPad app has inexplicably been missing the puzzle. So I’m sure a lot of their regulars are pretty upset right about now with all the upheaval and changes. Fortunately, the puzzle can be found here on the Fiend by clicking on the “Today’s Puzzles” link up top.

So if you managed to find the puzzle and solve it, good on you. It comes to us from Matt Skoczen, who I hope can give us some pointers on how to pronounce his surname.

Maybe his theme is appropriate for today as I imagine all the irate solvers in WSJ-land. His advice to them is to mind their PS AND QS (29a: [Something to mind, and a hint to this puzzle’s theme]). So the themers fell into two camps for me: Absolute gimmes which I didn’t need any crossings for, or things unknown to me. This made for a somewhat disjointed solve.

But on the whole, it’s a nice grid. All the Qs are handled well—not a single abbreviation among them. The non-theme Q-words are: INQUESTS, EPOQUE, QANTAS, QUAALUDE, ROQUE. 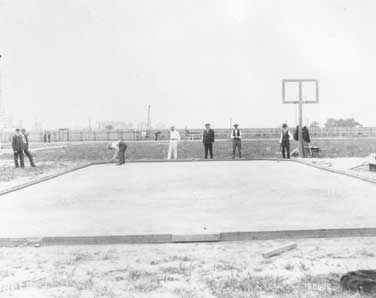 Really nice, presuming you know how to spell QUAALUDE and have heard of ROQUE. I did neither. Consequently I was Naticked at the first two letters of 52a RAINS ON [Spoils, in a way]. I don’t think I would have ever guessed that QUAALUDE was spelled with two As; I tried Y, I, E, L. Nothing worked, obviously. And ROQUE? Apparently it’s an American variant of croquet which was popular in the early 20th century. It was even an Olympic sport in 1904…but just the once.

I like the international feel in the grid with entries VENEZIA (nice), THEBES, SHIVA, TAI-PAN, ASSAM, and the aforementioned QANTAS. Also French NON and MARDI. Some people don’t care for foreign language words in their puzzles, but I think these are all pretty fair with ASSAM and TAI-PAN being crosswordese.

So despite my struggles with half of the theme answers and being Naticked, I give the grid a thumbs-up, especially given all the Q-challenges our constructor faced. So let’s mind our PS AND QS and hopefully we can all just get along. After last week’s challenging and fun guest puzzle from Natan Last, Aimee Lucido provides this week’s AV Club puzzle, whose 2/5 difficulty is offset by its slightly larger size – 17×17 instead of the usual 15×15.  The title of the puzzle made the theme entries very clear:

Again, this was a charming theme whose gist I knew before I started the grid, but that didn’t affect my enjoyment of discovering the answers.  For many of these, I had half the answer (Mike JUDGE before JUSTICE, Patty DUKE before realizing it was looking for DUCHESS as the title), which still gave it a little challenge as I worked on the corresponding downs.  Elsewhere in the grid:

If that big list of clues/fill wasn’t an indication, I really liked this puzzle.  Clever and straightforward, which is nice every once in a while. Heterographs! A well-worn theme path. Still, this an interesting set – with four of the five spellings I can think for SAKS. GENESAKS’ estate will be writing letters shortly… The other are split evenly between plurals and singular. We have POTATOSACKS, AMNIOTICSACS, GOLDMANSACHS, and BARITONESAX (didn’t know what type of SAX Ms. Simpson played, and didn’t know there were other saxes beyond tenor and alto…)

The puzzle’s fill is mostly benign. There’s not many particularly special answers, but apart from your RAMMER and your SNORER, nothing that particularly offends either. Hello there, everyone! Hope all is well on this Hump Day. Today’s grid, brought to us by Mr. Randall J. Hartman, includes multiple-word theme entries in which a word synonymous with nothing spans the two-word answers.

Initially had “gloat” instead of BLOAT (46A: [Puff up]), which made the sports reference for BATS turn into “gats,” making me wonder for a second if someone’s letting in firearms at a baseball field (46D: [Ball club ball clubs?]). That clue for “bats” was a tongue twister as well. Probably my favorite fill of the day was ALL-NIGHTER, something I pulled off a couple of thousand times when I was in school (11D: [College cram session]). Does anyone use the term TREED anymore, when describing someone/something that’s in a jam anymore (27D: [In a jam, in a way])? Of course, this grid is going to get extra love from me since it has my nickname, ADE, in it (20A: [Fruit drink]). Just make sure you don’t pronounce it like you’re saying “aid,” and we’ll be ok!!

“Sports will make you smarter” moment of the day: MOATS (5A: [Castle protectors]) – In 2004, then Louisiana Tech University running back Ryan MOATS announced himself onto the national stage, rushing for 1,774 yards en route to becoming the 2004 Western Athletic Conference Player of the Year. A few months later, he was drafted in the third round of the 2005 NFL Draft by the Philadelphia Eagles, and he spent parts of five seasons in the National Football League.

Thank you, everyone, and I’ll see you tomorrow!