This Fireball is in my wheelhouse. I’ve worked full-time in hospice and palliative medicine for the past seven years. Some people might think this theme is depressing. I feel right at home.

It’s an extra-long (15×17) grid that may have been inspired by the recent exits of several icons of the stage. The themers are:

And the revealer down at 76a:

The five stages are, of course, DENIAL, ANGER, BARGAINING, DEPRESSION, and ACCEPTANCE. I’m glad that Peter said they may occur, not that they will occur. Elisabeth Kübler-Ross did pioneering work in the psychology of grief, which is a universal human experience. She gave us a vocabulary to discuss grief and loss outside of religion and opened a conversation that continues to this day. Her work, unfortunately, has been widely and wildly misunderstood and misapplied. Grief is a universal experience, not a uniform experience; each of us will walk through it differently and express it in our own way. And death isn’t a single loss; it is a series and collection of losses which will land at different times. When my father died, I lost my father and my mentor and a colleague and my daughter’s grandfather and my mother’s husband. Those are all different losses; I have come to accept some and not others.

For other perspectives on grief, I recommend Madeleine L’Engle’s “Two-Part Invention“, C S Lewis’ “A Grief Observed“, and Ken Doka’s work on disenfranchised grief. Dr. Doka has a new book, “Grief is a Journey“, that I’ve found very helpful.  And everyone should read Atul Gawande’s “Being Mortal.”

OK. Back to the crossword. Other things I noticed:

What I didn’t know before I did this puzzle: that QUOTA is Latin for “how large.”

I’ll close by answering my own question about cats and iPads. My goodness. The solo black squares in this grid—the ones that don’t touch another block, not even diagonally—all replace the word ACE because, I guess, somehow single black squares represent some kind of ace? The Across and Down answers that abut the ACE blocks are completed by including that ACE. I’ve circled the letters that are adjacent to each ACE. We’ve got aceTATE used in cels and some sour aceRBITY in the northwest corner. In the northeast, there’s AMAZING GRace crossing the double-ended CRETaceOUS. Below that, there’s VERSace and LIBERace. And in the final quadrant, the ace IN THE HOLE revealer is clued 52a. [Hidden advantage that this puzzle employs four times?], and its ace crosses ADJaceNT TO.

Nice twist on the rebus concept, though the square aces are kinda throwing me.

Favorite fill: BLACK SHEEP, RIPLEY’S (man, I was a sucker for the comics-page version and the paperback books from the library), JULES VERNE, “TO LIFE,” and Rebecca DEMORNAY.

There’s some weather happening in here. Below ICELAND, there’s SLEETS and DROPLETS, and to the right of it, there’s the BREEZIER NEAR GALE. I can’t be sure it’s not also raining BLOOD here.

Less exciting fill: IN DC and I IN (that’s three INs including the revealer), DERR, AVERS, NEWEL, IS OUR, ASANAS, AHL, TERNS, plural EEKS, and outdated TNN.

Today’s byline is one of editor Mike Shenk’s well-known pseudonyms, being an acronym for The “Collegian”, the school newspaper at Penn State University.

He gives us a military theme in which common phrases start or end (or both!) with an abbreviation for a military rank. That rank is “broken” out, i.e. separated by a block, from the main part of the entry. That’s a lot of brass! We get one general (O-10, I’m assuming 4-star here), one admiral (O-10, Navy equivalent to a general), one colonel (O-6), and lastly, one lowly ensign (O-1). Sadly, no love for the hard-working non-coms who are the real backbone of the military. But then, good luck finding a phrase that starts or ends with SGT, CPO, PFC, or CPL.

This theme seemed pretty straightforward to me and not because I’ve been in and around the military my whole life. I guess I’m getting used to the way Mike Shenk’s mind works. The title indicates that military ranks would be broken up somehow. My first thought was that he would have phrases that break up a single rank, such as in ENGINE DESIGN. But when I encountered the first clued [Mil. rank] at 19a, I saw it was just an abbreviation and that it was directly following a long, probably themed, answer. I checked the corresponding entry at 58a, and yup, it was clued the same way. Then I found the other two in the middle.

Knowing that he’s run puzzles in the past that break up similarly, I sussed out correctly that these were going to be phrases beginning or ending with an abbreviation for a rank. Then it was just a matter of finding out which ones.

I made steady progress through the grid despite some proper names I didn’t know. 9d is GARDINER [Jake of the Toronto Maple Leafs], 33d is ELAINE MAY [“Primary Colors” screenwriter], and 43a is GIDE [“The Immoralist” author] (that’s French author Andre Gide).

I also didn’t know SKI PARTY (46a, [1965 Frankie Avalon film]). Of course, I know of the Beach Blanket films, but I never knew they took to the slopes. (Tag line: “It’s where the He’s meet the She’s on skis and there’s only one way to get warm!” Wow. The plot sounds truly awful. One bright spot, though: at the end, one character swims off into the ocean from California in search of a fictional woman who is supposedly “somewhere near Guam”. I’m from Guam so this got a chuckle from me.)

Back to our grid. There’s a nautical theme perhaps inspired by ADMiral ISSIONPRICE. 1a is WATER, followed by VOLGA. We also get vowel-heavy AEGEAN SEA, WADE, and DEEP END. Oh, and some RAIN FALL at 5d. 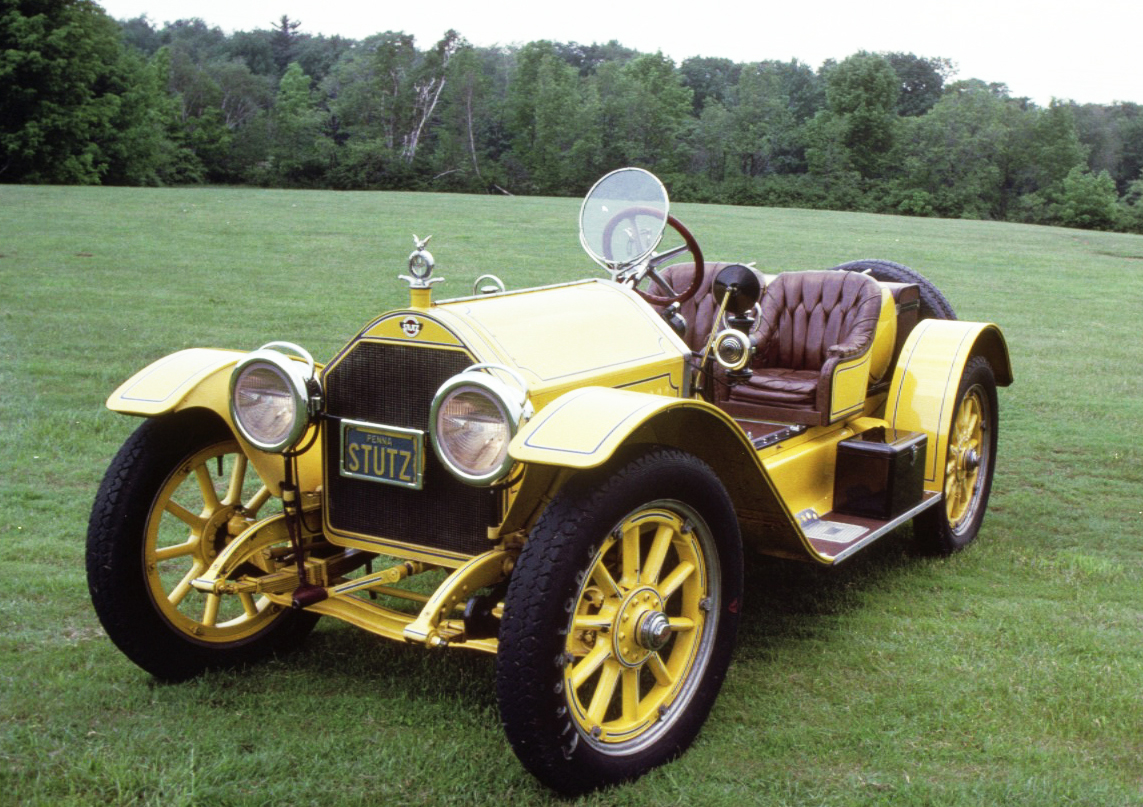 A DOOZY of a car—the STUTZ Bearcat

Thus concludes another regular WSJ puzzling week. Until next time! Happy Cinco de Mayo!  This Thursday’s BEQ is equal parts clever and frustrating.  I’ll explain why in a sec, but for now let’s start with all 12 (!) theme clues and their associated revealer:

As it turns out, their are a few secret IDs that need to be placed in two of the grid’s black sections for the fill to make sense.  16A/17A cracked this open for me – I knew the Black Sabbath song was PARANOID and that IDA LUPINO was the director (which I knew since she’s also one of the only people to appear in AND direct an episode of The Twilight Zone), but neither was quite fitting in the grid.  I was expecting playing cards to somehow play into this from the title (and having today’s NYT on the brain), but quickly realized it was ID cards.  The rest fell into place.

And now the frustrating part.  With all this theme fill (which is pretty good), some of the non-theme fill/cluing felt unusually hard – I forgot to time myself while solving, but it definitely took longer than normal to decipher some of the clues this week.  Other clue notes this week:

The non-theme fill on this one was a bit of a letdown, but I liked what was going on otherwise. Hello, everyone! Today’s crossword puzzle, brought to us by Mr. Martin Ashwood-Smith, could have also been titled “Don’t Get the Lead Out.” In each of the first three theme entries, the word “LEAD” spans multiple words within the answer. The fourth theme entry, DENSENESS, acts as the reveal (66A: [Quality of the theme word hidden in this crossword]).

Knew this grid was going to be a meaty one given all of the longish entries in the Northwest and Southeast, and was pretty pleased with most of that fill, especially TAKE SHAPE (1A: [Become a reality]). Seeing YOO definitely reminds me that I’ve gone way, WAY too long in not having chocolate milk (39A: [___-hoo (chocolate drink]). In today’s “to spell out T (tee) or not to spell out T,” the former won out, with DO TO A TEE (40D: [Execute exactly]). I actually recently learned that the classic shoot-em-up video game CONTRA, though dealing with having to eliminate aliens, owes its name to the actual Contras involved in the actual political controversy from yesteryear (34A: [Iran-______ Affair]). Well, time to head out for lunch in Manhattan, but we’ll see if I can come across a CELEB (65A: [One of Us?]) being driven in an A CLASS (26A: [Mercedes-Benz category]). Going to head to the same place where I struck up a conversation with a Victoria’s Secret model a couple of years back while waiting for a sandwich.

“Sports will make you smarter” moment of the day: ARENA (63A: [Gladiator’s realm]) – Former United States Men’s National Team soccer coach Bruce ARENA is currently the head coach/manager of the Los Angeles Galaxy of Major League Soccer (MLS), the highest-level soccer league in the United States. Before his professional coaching career, Arena, who was a standout goalkeeper at Cornell, won five national championships as head coach of the University of Virginia. At the professional level, he’s won five MLS Cups, the most recent coming in 2014 with Los Angeles. At the international level, he coached the U.S. team to one of its best performances ever at a World Cup, leading the Stars and Stripes to the quarters at the 2002 World Cup in Korea/Japan.

TGIF tomorrow! Hope you have a great rest of your Thursday! ALLCAPS is an excellent revealer. The rest of the theme plays out in typical fashion. Each of the four pinwheel answers (plus two long extra horizontal answers) has a first part that is satisfied by “___ cap” – ice cap, night cap, bottle cap, shower cap, kneecap and sky cap. I didn’t recognize “sky cap”, but after looking it up, I think it has been in other puzzles. I’ve never encountered anyone performing the linked-to description at an airport ever.