I kind of dig the theme; it’s a bit of a twist on the old vowel progression theme. Plus, there’s a ton of theme material in this one: 5 theme answers plus the EIEIO at bottom right (which, by the way, it’s really hard to put an all vowel answer along an edge like that–that’s part of the reason why the grid allows for several of those down entries to be 3-letter words, which are much easier to fiddle around with). Should’ve solved this one even faster, except I got off to a rough start at 1a, I’M OFF [“Gotta run!”]. Started with SEE YA, then changed to I’M OUT. Also dropped in CRASS instead of CRUDE at 14a [Potty-mouthed].

A couple other things that stood out to me:

Lots of fun pop culture references in this one from a variety of time periods, even besides the thematic E STREET BAND and I LOVE PARIS: 1d, ICE [___ Palace (Elsa’s hide-out in “Frozen”)]; 2d, MRS. [“___ Doubtfire”]; 65a, WALDO [Picture book character lost in a crowd]; 67a, SAM [Frodo’s best friend]; plus ILSA from Casablanca, RKO (the STUDIO that made King Kong, and Adele’s “HELLO.” 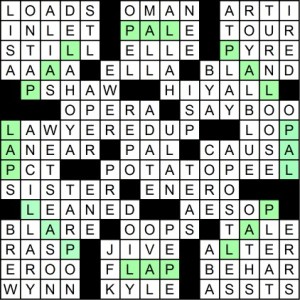 Oh, yay: Liz has given us a two-fer today, a puzzle within the puzzle. Thinking I didn’t or wouldn’t need it, I threw caution to the wind and solved this one without first consulting the Notepad. The puzzle fell without much trouble, so score one for me. I mostly liked the fill, noted the lovely number of longer grid entries, but I had no idea how any longer entry worked with any other longer entry; and more tellingly, what the title had to do with the completed grid. Time to open Notepad, which very swiftly led me to my “aha” moment.

After completing a word-search-style investigation of the grid (as directed), there, as described in the instruction, was the “circle of friends” promised by the title and completing the theme. The unobtrusive word PAL, which sits right in the center of the grid, is clued simply as [Buddy]. No promise of a theme there, right? But surrounding it (moving around the grid in perfect clockwise order [i.e., no L-A-P or A-L-P—always P-A-L]) are eight more “buddies,” creating a literal “Circle of Friends.” If my description of the exacting and artful way this one plays out isn’t workin’ for ya, the grid up top should clarify the matter!

As I mentioned, I couldn’t fail to notice all of the long fill today: two 10s, four nines, two eights and a mess of sixes. Most welcome among these are Olympic boxing’s Oscar DE LA HOYA and those [Last Supper guests], the APOSTLES; WET SEASON, TURN LOOSE and ROYAL BLUE (ANCILLARY ain’t too shabby, but it’s also a tad dry); POTATO PEEL with its peppy/foodie clue [Edible spud part] and (my personal fave) the lively term we’ve probably heard on every TV show with a legal bent: LAWYERED UP. Beautiful. (From its clue, [___ finalis (purpose, in law)], I’d assumed CAUSA finalis would have some sort of connection to judicial law. But darned if I can find any tie-in. Natural law, among others, yes. Perhaps someone with a legal background can speak to this…)

Oh, and among the sixes, hats off to my faves there, the staggered stack of “HI, Y’ALL!” and SAY “BOO,” and also AT PLAY and TARPON. I’ve been aware of TARPON Springs, FL, for decades, but had never known (until solving) that it’s named for this [Large silvery fish]. Omg. Can you say understatement?

Can we talk? [Humongous silvery fish]

On the subject of understatement, I really loved the [Oaf’s apology] “OOPS…” pairing. Also, simply because I have more than my share of paper ones (don’t ask…), I got a kick out of encountering the quaint [Lacy table mat] DOILY combo (though mine get used on serving pieces and not directly on the table).

Besides CAUSA finalis—because it’s an unfamiliar (to me…), niche-centered term, iffily clued—not much here to get me actively IRED. Me, I even enjoyed the presence of the word-laddery OPEL–OPAL–OVAL triad, and found myself adding OMAN, “omen” and “open” to the front and “oral” to the back of it.

So, with its super fresh and elegantly executed theme and loads of fine fill, BLAND is probably the last word I’d use to describe this more savory puzzle. Let’s make A DATE to do this again next week, shall we—and in the meantime, “Keep solving!” Very breezy solve for me, even for a Tuesday. Theme is “___ & ___” phrases, cutely reimagined as photo captions of a famous person holding some food:

Two of the theme phrases are dishes by themselves (RICE AND BEANS, BACON AND EGGS), while the other two aren’t. I like the concept (it reminds me of celebrity Instagram feeds), but I think I would have liked this theme more if all four phrases were like the middle two (ROCK AND ROLL, HUFF AND PUFF), where a celebrity and a food come together to make something completely different.

A few other entries of note: I’ve never solved a daily WSJ before, so here goes… I’m assured the difficulty progression works similar to the NYT and LAT, so I’m expecting an early-week concept. This fits the bill, with INSIDEINFO being a typical thematic trope. INFO is hidden in the middle of phrases, spanning two words. I’ve seen it before, so it’s worth comparing the puzzle to this one and this one for two. JOINFORCES is functional, where BRAINFOOD and RAINFOREST are more spiffy. I’ve heard of DANCINFOOL, but a 37 year old #45 hit from an album that didn’t even sell 100,000 copies in the US from what I can tell is not a theme answer for a general audience. TWINFORKS is even worse in that regard; an indie band who have never had a Top 100 appearance on the album or single chant… Why do they get to be in the puzzle? Their only claim to fame seems to be Chris Carrabba, who is from Dashboard Confessional, the Googles tell me. I know of that band, but not enough to know their members or their side projects…

Not sure what to make of it, with theme obscurity out of keeping with the rest of the puzzle…
Gareth Hello there, everyone! How’s the last day in June going for you all? Today’s crossword puzzle, brought to us by Mr. Alan Arbesfeld, deals with movies that have been “remade.” Each of the theme entries are plays on actual movie names, but with the final letter being dropped to complete the funny (and punny) business.

Who else put in “Rocky” instead of RAMBO to start, other than me (1A: [Sly persona?]). Though not hard to switch one out with the other, how interesting is it that the character names of an actor’s two famous roles happen to both be five letters in length and start with letter “R”? Love the trivia aspect to the clue for MARIE CURIE, as well as her full name being spelled out in the grid (3D: [Only person to win a Nobel Prize in two different sciences]). Speaking of full names spelled out in a puzzle, how about FATS DOMINO as well (29D: [’50s R&B singer whose given name is Antione])? The tune to “Blueberry Hill” is playing in my head right now, and there’s absolutely nothing wrong with that! Can’t say that I’ve heard of the term ARABIST before until today (9D: [Mideast expert]). Little bit of a bone to pick with DEF, as the term was used to describe what today’s clue stated a long while ago, but now is used mostly – if not all the time – as just an abbreviation for definitely (46D: [Cool, in slang]). Person 1: “Are you going to the Rihanna concert on Friday?” Person 2: “Most def!” Something like that. Not a bad solve, though I did cringe at the sight of ILLY, a word I’m sure no one uses in regular conversation (48D: [Ina bad way]).

“Sports will make you smarter” moment of the day: MAV (58A: [Dallas cager, for short]) – Anyone who was a MAV fan (short for Mavericks) during the 2011 NBA PLAYOFFS (37D: [Winnowing process in sports]) ended up being on cloud nine after that season was over, as Dallas ended up winning the NBA championship over LeBron James and the Miami Heat. When the 2016 NBA Finals commence on Thursday, LeBron will become the first non-Boston Celtics player to play in six consecutive NBA Finals series when his team, the Cleveland Cavaliers, take on the Golden State Warriors. The aforementioned Finals in 2011 was the first Finals series of his current streak.

See you on the top of the hump for Wednesday’s puzzle! It’s as if it were fate that I should be covering this puzzle.

65aR [What you might say when you get the theme answers (or if you can’t figure them out)] RATS. Accordingly,  the wacky phrases that comprise the theme answers are composed of words that can precede “rat” strung together. The title refers to the 1971 horror film about a man who guides rats as the instrument for his revenge. Probably Rattus norvegicus (see 39a) or R. rattus, but I don’t know because I haven’t seen it. The relevant trivia is that a young Michael Jackson wrote the title theme song to the film’s sequel the following year: “Ben”. Theme works, and the answers are chuckle-worthy.

Had one wrong square, but sussed it out eventually. 39d [One way to enter a hidden cave?] BAT HOLE, which doesn’t make too much sense. Bats might go in and out of caves via holes, but they certainly aren’t capable of creating such holes.

Cute theme, felt like an overabundance of FITB clues and sketchy short fill.