It is June 13 and you know what that means! Or maybe you don’t. Not only is it my sister’s birthday, but it’s also Diary of a Crossword Fiend’s 11th blogiversary! The traditional gift for an 11th anniversary is steel, so you know what to do. EASY DOES IT is the theme revealer, and there are four theme entries with E.Z. initials:

This puzzle flowed pretty smoothly for me, even with those fat, wide-open corners with stacked 9s. I liked OVULATION with its unembarrassed clue, [Part of the menstrual cycle]. I looked up “menstrual” as a clue word in the Cruciverb database—zero hits. It is time to quit being afraid of a basic thing that is part of life for half of the solvers. KATE, TINA, Santa ANA, and ELSAS flesh out the womanly vibe here. And while most plural-name answers draw my scorn, [Many “Frozen”-inspired Halloween costumes] works perfectly for ELSAS. I’ll wager that there were far more ELSAS out trick-or-treating the last couple Halloweens than there were witches or Cinderellas. What else would you call a roving pack of preteen girls dressed as the Snow Queen?

I also like the colloquial MIX IT UP clued as [Engage in a brawl] (though I think of “mixing it up” more as verbal, not physical, scraps), along with FINE-TUNES and CANOODLES. Oh, and NANS. At dinner Sunday night at Tiffin, there were a few naans (my preferred spelling) on the menu, and I tried the cheese naan along with the yummy paratha. My entree was the murg shahi korma (so good! almonds and raisins in the sauce!), and samosas (of course) and ragara patties were our appetizers.

With two more Crossword Nation contenders in the mix (6/21 and 6/28), it remains to be seen if today’s puzz does, in fact, take the title in the title. That said, oh boy, does it beautifully develop that idea, especially as it relates to the reveal at 59A. [Julia Glass debut novel that won the 2002 National Book Award … and a hint to the puzzle theme] THREE JUNES. With that title as her inspiration, Liz delivers up three lively and varied supporting themers. The pot is sweetened as the second word of each free-standing base-phrase can be preceded by the word JUNE to create a whole new entity—and, literally, THREE JUNES. Hey—two fer the price of one! Here’s how it plays out:

But wait! There’s more to ADORE!

First of all, I love the literary/literate connection we get with THE WEDDING and THREE JUNES. DAPHNE [“Rebecca” author du Maurier] (not to mention recollections of the severe, AUSTERE Mrs. Danvers) PLAYS UP [Emphasizes] that quality. It’s hard to give this puzz too much BAD PRESS with (additional) strong fill like PERGOLA, NEAR-TERM and MAHATMA to be savored; and with strong, second-thought-producing clues like [Trims] for DRESSES (think culinarily here) or [Cone head?] for HARD “C.“ The visual [Thumbs a ride] naturally brings us to HITCHES, as the similarly visual (and kinda visceral) [Disfigured, like Capone’s mug] brings us to SCARRED. Even the NUCLEAR [Kind of power plant] pair elicited a wistful wince from me, triggering memories of “W” and “nuc-u-lar.” (I know there are plenty of folks who have always pronounced it that way, but in this particular election season, thoughts of “W” and even [H. ROSS Perot] make me nostalgic for what now feels like the not-so-distant “good old days.” <sigh>)

Not a lot here that makes me go “G-R-R!” Not in love with “S-S-S,“ although it was nice to get this one clued in connection with the kitchen [Sound from a fryer] and not with any [Killer reptiles], like ASPS.

And with that, I leave you for the week. Hope this one was the smile-maker for you that it was for me. Could be this one really EARNS the CN “Puzzle of the Month” title after all. Keep solving and “we’ll soon find out”! (Or soon-enough, at any rate…)

Self-explanatory theme from editor Mike Shenk using one of his cruciverbonyms. It’s FLAG Day everybody! Does that mean we all walk around with our shoulders drooped and panting? Or waving down people as they drive by?

Each of our theme answers refers to cloth FLAGS, so the puzzle is consistent in that. But I would’ve found it more interesting if there were different uses of the word FLAG. In computing, a FLAG is a Boolean variable, set to true or false, to cause something (or not cause something) to happen in the program. According to The Free Dictionary, it’s also another word for a newspaper’s masthead, and it’s the part of a taxi’s meter to show that it’s for hire (and similarly I should think, a mailbox).

But today we honor the American FLAG, nicely placed as the first themer in the puzzle with the grid-spanning CAPITOL BUILDING. The FLAG we all know was adopted on June 14, 1777, and FLAG Day was officially established by Woodrow Wilson in 1916. 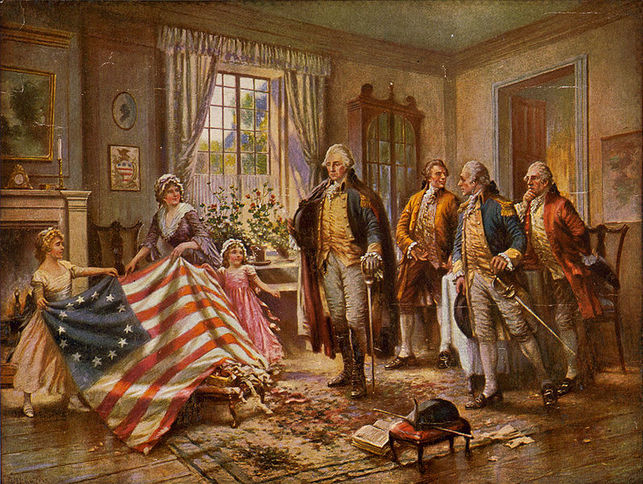 CAPTION CONTEST! Give us your best caption for George Washington’s thoughts in the comments below.

Ok. Back to our puzzle. I’m not a golfer, but the phrase GOLF GREEN doesn’t sit well with me. I don’t think there’s a good alternative, but it really sticks out as a non-phrase. Sure, it’s a thing, but the phrase is not a commonly accepted one. I may be absolutely wrong on that, so please correct me if so. Plus, I really wanted BLOBS at 34d [Amorphous lumps], so this was the very last section for me to fill in.

I like CLICK HERE, HOMESTYLE, and CHESTNUT. Never saw Sons of Anarchy, so I didn’t know the theme song THIS LIFE (with the F crossing GOLF GREEN in that same section). The rest is all pretty standard. Oh, I do like the word HALTING, and PRISONS gets a good clue [Con federations?]. And of course, there’s little to no dreck in a Mike Shenk production, so the grid is very, very clean.

That’s about all from me. Very simple theme in honor of the day, but a clean grid overall. Don’t forget to caption the above painting in the comments below. Not too difficult a puzzle, but there are a couple of obscure entries in here, at least to me, that ramped up the difficulty just a tad. If not for solving on my computer, which tells you immediately once you have a correct grid, I otherwise wouldn’t know if it was right or not! Will discuss some of this entries in the comments in a moment, but let’s discuss the theme for a moment. As the title implies, the circled letters all form some sort of game, and they form the ends of the long entries, hence the reference to it being a “shell.” Here are the theme entries:

So the games formed (as shown in red above) are PONG, GOLF, SKAT, and RISK. A  video game, an outdoor sport, a card game, and a board game. All different types of “games”; a nice touch! To be clear, I don’t mind the obscure refs. I feel like I am learning something when I solve puzzles like this; it can only help my pathetic Learned League performance! And the theme is still good in it’s relative simplicity, even though it took some slightly different answers to get the desired results. I am quite sure there aren’t many 15 letter entries that start in PO and end in LO! How many four-letter games are there, anyway? We will rate this one 3.9 stars.

Some of those obscure answers, among others:

Matt’s puzzles are always fun! Until next week! OK, after a year or so of blogging, I finally confront a constructor that does not appear in the constructor database on this site! So it is safe to say I am not familiar with Agnes Davidson. This is a collaboration with C.C. Burnikel, so perhaps she (Agnes) came up with the theme idea? The theme is timely! Here are the theme entries:

I told you it was timely! Tuesday is indeed Flag Day! So we have PENALTY FLAG, STATE FLAG, GOLF FLAG, PIRATE FLAG, RAINBOW FLAG, and AMERICAN FLAG. Including the revealer that is seven theme entries crammed into a 15 x 15 puzzle. Very nice! A solid 4.2 stars for this Tuesday’s clean puzzle! Good afternoon, everyone! Sorry to be the last one to the anniversary party, but I’ve always been one to be fashionably late. Today’s crossword is brought to us from our favorite Commodore, Mr. Jeffrey Harris, and each theme entry is show or movie with a three-word title with the L-W-T pattern.

Was at a loss for a second seeing the clue to OAK LEAF, as I’m usually pretty good at remembering characteristics of sports logos (10D: [Part of Vanderbilt’s logo]). But I was thinking of the primary logo used in athletics, instead of the one seen for other university uses and functions, which I have also seen. Oh, and I’ve had the honor of stepping onto the Vanderbilt campus when I was in Nashville in 2014. I liked the mislead for the clue with TRAPEZE (26D: [Swinger’s bar?]) much more than the one used for NOBLE, which was the last clue I filled in on the day (9A: [Earl-y]). Time to head out, as I’ll be in MSG for the evening – the arena (Madison Square Garden), not the ingredient (1A: [Chinese food additive, for short]).

“Sports will make you smarter” moment of the day: GLOVE (3D: [One of a boxer’s pair]) – Because of his near legendary defensive prowess, NBA Hall of Famer Gary Payton was nicknamed “The GLOVE.” Payton, best known for his time with the Seattle SuperSonics in the 1990s and winning and NBA championship with the Miami Heat in 2006, was the NBA’s Defensive Player of the Year in 1996 and was a nine-time First Team All-Defensive selection.