Today’s NYT theme is PLUS ONE, where the theme entries consist of adding an extra to a traditional group of things:

There are 50 states, five senses, etc., so this puzzle plays off adding one more. FIFTY-FIRST STATE is a new term to me, but it dropped right in from the crossings I had. The rest of the themers were common to me, and they are all tied together nicely by the revealer.

The fill is fine overall, if a bit dated in the pop culture department: BRITNEY Spears, LATOYA Jackson, Roger EBERT, Ernie ELS. NIA Long, TED Cruz, and ANTONIN Scalia are more current. It’s nice to see a mix of men and women, including a woman of color, this Wednesday. Nice longer fill includes OFFSIDE, INFUSES, and DASHING. The plural RBIS next to the plural NOS is not ideal, but it’s forgiveable.

Once last thing…why does a Google search for MOM jeans bring up so many pairs for sale? I’ll never understand fashion.

Jacob Stulberg finds a grid-spanning Beatles song and uses it as the basis for a puzzle. Each word in each two-word phrase can follow the word SUN.

Unannounced meta! Which two non-theme words in the grid can also follow SUN (though they don’t go together)? Answer in the comments. The Beatles were always my first musical love. I spent many hours in the 80s listening to Beatles songs on my Walkman. While other kids plugged in to Def Leppard or Genesis or Madonna, I was always a Beatles guy. So I know most of their songs, including the one featured today. You can be forgiven for not recognizing it, as it was an early song for them (released in 1964, but written by McCartney as early as 1960). It’s a simple but sweet little song with an easy melody and memorable lyrics. The Lennon-McCartney harmonies aren’t as extensive as other songs, but they are certainly effective.

But back to the theme. There isn’t really a conceit to explain why we have two words put together where each of them can follow the word SUN. That’s probably why this type of theme is falling out of favor in many venues. But if you’re willing to accept it, you’ll find a nice puzzle here. 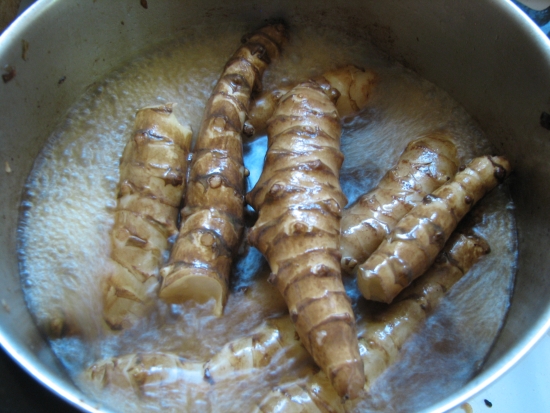 The puzzle played tough for me, so the first themer I revealed was CHOKE DOWN. I then discovered the revealer but couldn’t make sense of it, because I have never heard of a sunchoke. Turns out it’s another name for a Jerusalem artichoke, which is neither from Jerusalem nor an artichoke. It’s actually a species of sunflower found in the eastern U.S. and whose roots are edible. Fun fact: the inulin (not to be confused with insulin) they produce cannot be digested, but is metabolized by bacteria in the colon, thereby causing flatulence. You have been warned.

The rest of the grid is very nice with TWIN FALLS, OSCAR NODS, VILLAIN, SPECTRA (which is almost the villainous organization Spectre), DORITO, and HELP ME. The NE was toughest with 19a RAFER Johnson (1960 Olympics decathlon gold winner) and 10d asking for [“And Then There Were None” multitude] which I took to mean that it wanted a number. My first thought was TEN of course, because the book had the alternative title Ten Little Indians. This may sound offensive, but as I just discovered, it isn’t nearly as offensive as the original book title in the UK which was used until 1985! It is, however, considered to be Christie’s masterpiece. Anyway, the answer to the clue is DEATHS.

A couple clues struck me as off. 29a [Horror movie sounds] should be more than just EEKS, unless the axe murderers are mice. And 56a [Org. sponsoring piece talks?] implies the NRA is open to discussion about guns and gun legislation, though that clearly isn’t the case. However, on second glance, I guess the clue is just referring to talking about guns in general which the NRA certainly does.

Anyhow, I’m partial to this puzzle because of the song it’s based on as well as the fact that it’s cleanly made with plenty of interesting fill.

And now for the song in question: After last week’s puzzle (which was as tricky to write up as it was to solve), t was nice to have an easier puzzle this week from Aimee Lucido.  I picked a good week to solve starting with the downs, as that’s where this week’s theme entries were hidden:

I’m loving the continued of Prince-inspired crosswords we’re getting this year.  86A proves the key to figuring out the Something Different-style answers for the rest of the theme – they’re all towns pointing up:

ON SERF was the first of these answers where my intuition as to these answers was finally enough to get entered into the grid.  I quickly saw it formed FRESNO pointing upwards, and that confirmed the rest I had already encountered.  Other notes from this puzzle:

I had a few problems with the fill, but this had a solid theme and some nice entries. Good afternoon, everyone! Today’s crossword puzzle, brought to us by Ms. Donna S. Levin, is all business. Each of the four theme entries is a multiple-word entry in which the final word could also be described as a type of business.

Why have just one rapper whose far started to rise in the late 1980s, DRE (46A: [N.W.A. cofounder, familiarly]) when two, with the addition of ICE-T, would be just as nice (59A: [“Law & Order: SVU” costar born Tracy Lauren Morrow])?! Thank goodness that I’ve been studying French extensively over the past year, so LUNDI was a gimme for me (29D: [Start of the Parisian workweek]). I don’t think I’ve come across too many GEMINIS who haven’t said that they are two different people/personalities (45D: [Some June arrivals]). I mean, I don’t brag about being a harvest goddess, being a Virgo! I could, you know! OK, maybe not. Can’t say that I’m a bridge expert (far from it), so I’ll take the constructor’s word when reading the clue to MISDEALT (38A: [Delivered 14 cards to a bridge player, e.g.]). Speaking of card games, I haven’t played one in a long time. Might be time to get back into playing. Anyone having a game night anytime soon?!?! The puzzle contains three different, err DIFF’RENT, golf STROKES, spanning across the words in the long acrosses. They’re arranged in the opposite order to what you expect, unless you read them bottom to top. Mr. Wechsler is playing a short par four I’m guessing… A DRIVE to the green, a CHIP onto the green, and then one-PUTTing!