Today the NYT brings us a collaboration between constructors Natan Last and Finn Vigeland and the crossword construction course they teach at the Jewish Association Serving the Aging (JASA). Their theme involves increasing numbers of rings visually represented by Os and tied together by 15 hours of epic opera:

I found the theme quite enjoyable, from the One Ring found in THE HOBBIT to the three-ring CIRCUS to the timely five interlocking rings of the OLYMPIC FLAG. AUDI DEALER as opposed to the Audi logo isn’t wonderful, and VENN DIAGRAMs can have more than two overlapping circles, but the theme carries a nice aha moment and feels fresh for the NYT.

The fill skews towards the younger side, with BOOYAH, GIGLI, DJANGO, “That’s what SHE said!” (most recently popularized by The Office, and why can’t he say most, if not all, of the things she said, anyway?). KITED [Floated, as a bad check] is a new term for me, and between that and YUBAN Coffee, the top center was the last of the puzzle to fall for me and took guessing YAK over GAB to complete the grid. NO I and AÑO/ANO (the longer I know what the word means without the tilde, the less I can unsee it) are the clunkiest fill entries, but forgivable compared to the grid as a whole.

Finally, we have CORGI. If I could give stars based on whether a puzzle contains Corgis, I would. Instead, here is a video of Corgis having a pool party.

Solid wordplay today from Mr. Atwood. Past tense verbs are combined with their sound-alike adverbs. These latter two entries shine and make up for my trouble with the first two. So overall, this puzzle scratched my wordplay itch nicely. 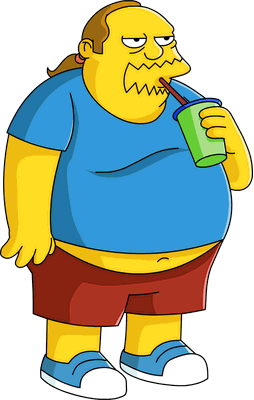 The rest of the puzzle is good, too. I especially like PONYTAIL at 11d [Feature of Comic Book Guy on “The Simpsons”]. And those NW/SE corners are nice, especially the NW with MAYTAG, ICE AGE, and CHARON running Down. Also, RAY GUN in the SE.

Not a fan of KERR [Golden State Warriors coach Steve] and AREEL [Visibly stunned] and OLES and ARTOO and ALUG. But those kinds of entries are spread out and not too distracting.

Given that all the theme answers are at least 12 letters long and that the four of them have to be squeezed together in the center of the grid, the compromises are really few and far between. Mostly I was focused on grokking the theme and that’s as it should be in a themed puzzle.

So overall, a very satisfying puzzle. See you tomorrow! Someday I’m going to crack 15 minutes on one of Kameron’s themelesses, but I’ll settle for finishing in under 20 today.  Two lovely sets of three-stacks frame the puzzle, along with an immediate understanding of why Ben Tausig included a quick writeup on the AVCX policy on puzzles passing the “Breakfast Test”: I know about the lower case L’s in I’LL. They bother me too.

I don’t mind my crossword being a little crass (have you seen my coffee mug?  I clearly have different standards for the breakfast test), so as with Kameron’s past puzzles, I dug this, vulgarity and all.  If 1A wasn’t your bag, maybe don’t dwell too much on 22D (FUCKBOY, although I usually see it spelled with an i at the end when the teens use it on Twitter/Tumblr) then?  Or look up what 16A‘s ODB is an abbreviation of?  It’ll be fine.  This is a lovely themeless grid.

A few other solve notes: I’m not in the best place – physically or emotionally – at the moment, but here goes… The theme is simple, and yet surprisingly limited theme. All the phrases begin with OO…

Not too much more to remark on. I believe [Soda purchases], COKES will confuse some Americans, who use the words as synonyms… I have no idea what [“Care to take a stab at the answer?”], ANYGUESS is supposed to be. ANYGUESSES surely? [“… just as I am”], LIKEME evokes this, though probably unintentionally…