When I finished the puzzle and looked at the timer, I was shocked. I thought it took a lot longer than 6:24 – I would have sworn I was flailing around for over ten minutes. I usually don’t have great swaths of white space in Wednesday puzzles. Phew.

This is not my favorite kind of theme. 33a is the revealer [Like each letter of the alphabet in this puzzle, at minimum] and the answer is QUINTUPLE. I’m taking this at face value. I didn’t count. Some of the fivesomes are obvious; there’s a cluster of Q’s in the middle of the puzzle and a row a K’s  in parallel, plus three Z’s in a bunch.

All those scrabbly letters create a pretty challenging vibe, especially for a Wednesday, which is not helped by the cluing. In particular, the cross-reference at 5a [43-Across in one’s ___ ] stopped me in my tracks. It’s an odd construction, and the only obvious answer in crosses was 7a APE for [Copycat.] In retrospect, it’s obvious that 5d [Pokémon Go, e.g.] must be CRAZE but it wasn’t clear to me in the moment (and what do you think that clue was originally? I figure it was changed shortly before publication.) I left nearly the whole section blank and moved on. It was unsettling, and I wonder if a less experienced (or less stubborn) solver would have just thrown up her hands.

There were some enjoyable moments.

But oy, the obscurity and crosswordese. ORYX, FOHN, RAKI, TSWANA. Ugh. Not a fun theme. Not great fill. Just not my kind of puzzle.

What I didn’t know before I did this puzzle: that RAKI existed at all. Apparently it’s a type of brandy. O-kay. Today’s AVCX puzzle is from Aimee Lucido and has a 3.5/5 difficulty rating.  Let’s take a look at what’s going on with the theme clues:

It’s another POKEMON GO-themed puzzle, so hopefully you learned your Pokemon after BEQ’s outing a few weeks ago.  This time it’s the clues that are invaded, rather than the answers, which works to varying degrees of success – some, like Oddish and Drowzee, fit naturally, others, like Koffing and Slowbro, feel just a smidge forced in.  That’s not all that’s going on, though.  As 68A suggests, ridding the letters from POKEMON from the theme entries themselves gives you a list of cities invaded: WATERLOO, DOVER, WACO, NICE, LEON, ROME, TURIN.

This had nice fill, even if the theme felt a bit underwhelming to me.  Maybe I’m just Pokemon Go’d out.

It’s an election year and VP candidates were announced a couple of weeks ago, so it seems a good time for this theme. The revealer is RUNNING MATE at 34a [Candidate’s choice, or what both halves of the starred answers can be]. That is, each half of our theme entries can be paired with (actually, follow) the word RUNNING. Very nice corners in this puzzle: ELONGATE and NAUGHTY in the NE, ROTARIAN and PROTEGE in the SW (though I can’t stop spelling that word protOge), and especially the SE with GLOOMY, HANKIE, and TWEETS all crossing MR RIGHT. Lovely. Also, AKIMBO.

Unlovely stuff: ORT, OLLA crossing ATRIAL, and ADMEN. I think this last one is dated and uncommon, let alone sexist. However, looking at Google’s Ngram Viewer, its usage has increased over the last few years no doubt due to the TV show Mad Men. Still, it seems like these days, it’s best clued with respect to that show. 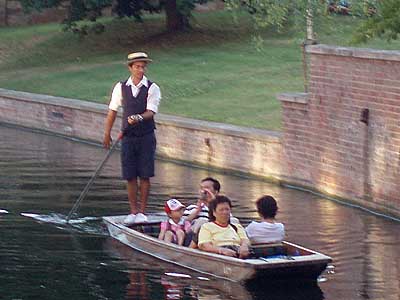 Did not know what a SKIMMER was (21d, [Wide-brimmed straw hat]). Turns out, it’s just another word for a boater. In the US we see them every four years, often at party conventions. In the UK, some schools still use them as part of their uniform, as do some sausage vendors and Scudamore’s Punting Company in Cambridge. Well, any puzzle will seem fun after that trainwreck of a NYT… Here we have a common theme trope – hidden words – with functional answers, but a delightful revealer. COMEBACKKID is as great as a punchline for your puzzle as you could wish for. I’d already worked out that each answer contained a synonym for “make fun of”, but was still pleasantly amused when the revealer revealed itself.