The theme is phrases that include terms that apply to the practice of law:

Cute, theme well placed in a Tuesday slot. Very mildly off-putting that the first two are apparel but the other two are not.

There’s also fill that doesn’t really belong in a Tuesday puzzle, if you ask me. ERSE, ERNS, and COATI, oh my!

Among the special gifts our constructor brings to her crossword-making style is the art of naming. Finding just the right title to wink at the theme within, without tippin’ her hand. She knows the value of a well-placed pun, and today’s title is just one example. “Cover Letters.” They’re what you attach to your job résumé, right? Right. But not today. Today they’re the literal letters indicating that the name by which we call you may be a cover for your birth name. Or, as spelled out at 61D. [Dossier letters that are hidden in four horizontal answers] A/K/A (also known as—a phrase that also appears in each theme clue). So we’re looking at an embedded-letters theme and not one that requires knowing actual aliases (Tracy Lauren Marrow A/K/A ICE-T [“Rhyme Pays rapper], e.g.). Unless you’re a brand-new newbie, you’ve seen this kind of puzzle before, but leave it to Liz—by virtue of that title—to keep the framing fresh.

As you can see (from those last three themers especially), what we have here is a puzzle with an easy kinda theme with not always easy kinda fill.  APOGEE, anyone?  MINOAN? Or [Silver HALIDE (photo emulsion component)]?  Not exactly the kind of words that get used on an everyday basis. But “GOSH DARN IT!” and SMALL TOWNS?  Now we’re talkin’!

A tad less difficult, but—by virtue of the cluing—still not out-and-out “gimme” material (for me, anyway…) were ANAGRAMS [Tangier and Integra, e.g.] (both words use the same set of letters), PARENTAL [PG component] (as in the movie rating [but somehow just wasn’t seeing it…]) and—wow—DOMINO with the tricky-to-parse [Spotted tile].  Is “spotted” a verb?  Is the “spotted tile” a type of fish?  Is this a decorative ceramic tile?  (Can you say “overthink”?…)

But this is all fine fill.  Two thumbs up, too, for SNEAKY  (“HEH!”) and RAKISH, DIAPER (and its [It’s a bum wrap] clue), and even the shorter but snappy HYENA, MACHO, TRIKE and KAZOO [Instrument with no learning curve]—which makes it unlike the instrument of [Grammy-winning pianist Richard GOODE], another example of fill I was unfamiliar with today and that made the solve a bit thorny…

But on we go, eh?  So, keep solving.  I will if you will—and come on back next week.  Hope this’ll be a good one for you!

Today we find DUET at 65a which turns out to be the revealer with the clue [Something not done alone, and a hint to the starts of the starred answers]. This leads to the discovery of a song you’ll no doubt hear many times this holiday season. I don’t find DUET to be a very effective revealer here. There are plenty of DUET songs (“Ebony and Ivory,” “You’re the One That I Want,” etc., etc.) I’d rather see a revealer that was more specific to the song title. Even BRR would work.

But despite that, the theme works because the phrases are legit, and they all follow the two-word pattern. Even the second one, IT’S, follows the pattern though it could have gone in myriad directions. (I’m partial to IT’S RAINING MEN, but it doesn’t follow the same pattern.)

As for the song, it’s gotten some press the past few years because it sounds a bit date rapey (“What’s in this drink?” e.g.). Recently, a Minnesota couple rewrote it to emphasize consent.

Looking at the rest of the grid, BRIGHT SPOT is a bright spot, but OVERARM, HAD A CASE, ESTIMATING, and EFFECTED seem like missed opportunities to put more interesting fill in the grid. I do like DEAD SHOT, CRAB LEGS, KIBOSH and MOONIE and the shout-outs to OTIS Redding and Sam COOKE. 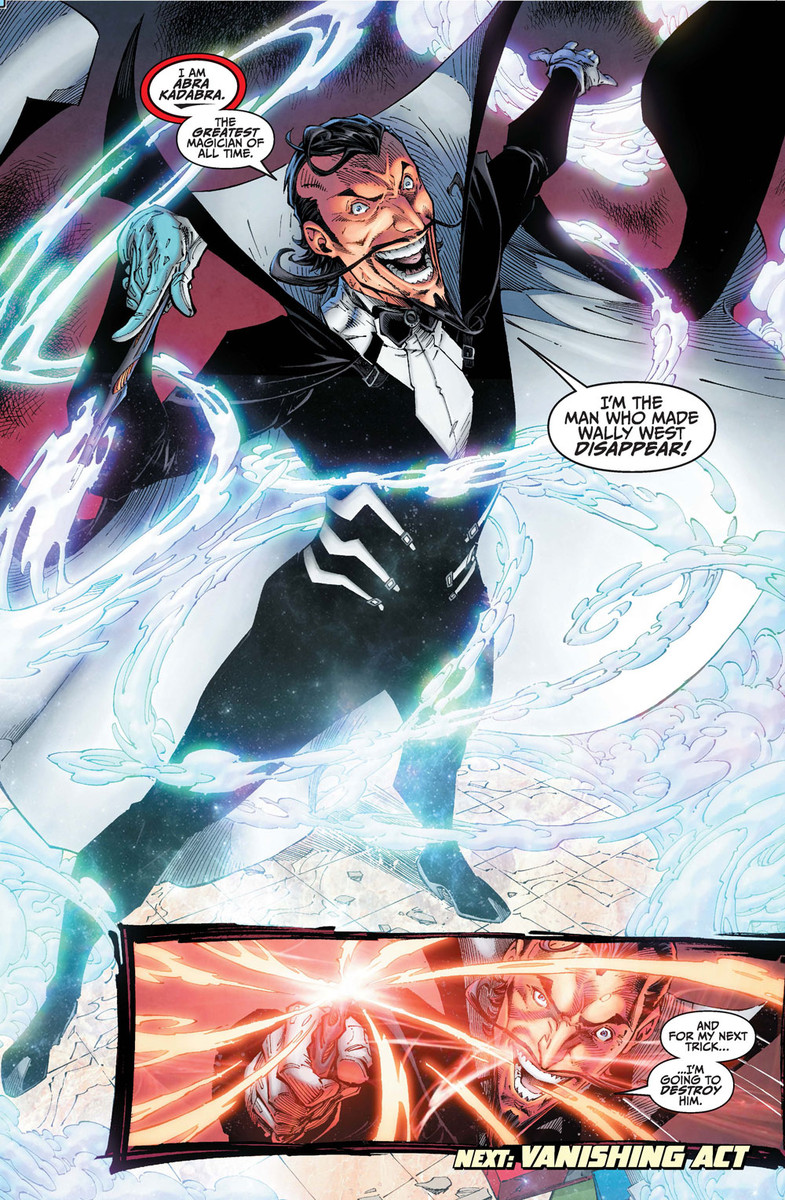 What’s your feeling about ONE DOWN? I kind of like it with its meta clue [Its clue is “Network launched in 1981”] (and of course 1d’s answer is MTV). But the entry could also be sourced from the numeric phrase ONE DOWN, x TO GO.

Lastly, despite once being a comic book reader and a fan of The Flash, I’d never heard of [Comics supervillain ___ Kadabra]. That didn’t stop me from filling in 9a immediately with ABRA, but I had to read up on him. Apparently he’s from from the 64th century and came back in time to become a famous magician. What a great plan! If I get my hands on a time machine, I’m gonna go back to the Stone Age and show off my iPhone. They’ll treat me like a god! How great would that be?! I’ll be a god…without indoor plumbing. Ok. Nevermind.

Good puzzle with some good fill, but also some missed opportunities. After looking at the first few down answers (and not knowing 1-Across immediately, this is my normal tactic!), I thought this puzzle might be a killer. Couldn’t get anything in the first 9 other than IDYL at 6D! But then, after meandering in the puzzle for a bit, the four main corners started to fall fairly quickly, and I did end up at the beginning, which is easily the toughest quadrant. My cursor is down in the lower left because that is where the errors were! I spelled SHAUN at 25D with a W, and I will discuss 43D below. 66 words by my count. Wonderfully wide open and fun! 4.4 stars.

It’s getting cold outside! And winter isn’t even here yet! This puzzle is not too hard, but the revealer is well-hidden at 50-Down!

Took me a second after solving to figure out how the theme worked, but the idea is you can skip class, work, town, or a rope. I must have been overthinking it! Nice tidy theme by C.C. again. Do I have to say again English is not her native language? Amazing! 4.3 stars for this one.

See you this weekend for the toughie puzzles!