After initially thinking there was a grievous duplication, the realization came to me that it was part of the theme. Examine the paired long entries:

These aren’t spoonerisms wherein the initial sounds of nearby words are exchanged, but a transposition of word elements—full words, actually—is involved. Like the best spoonerisms, they rely on spontaneous homophony.

Nevertheless, there is a high percentage of duplication here. DOWN, TIME, PAPER. That works out to 26 of 58 theme squares: 45%

Disappointed. Despite the interesting nature (3d [“Cool!” NEAT) of the four paired words and phrases—and how they’re oh-so-conveniently of equal lengths, just itching for symmetrical placemet—it seems too insubstantial a collection for a full crossword theme, especially with the inherent duplications.

Today we get two-word phrases in which the first word is a synonym for slug. The second word’s meaning is also changed as an added point of consistency. None of these strikes me as particularly funny and they mostly seem nonsensical — especially the last one. As Nancy Salomon says on cruciverb.com regarding puns, “If there’s no surface sense, as with HOARSE COLLAR, then there’s no mental image and no humor.”

There’s a lot of really nice fill, but the nonsensical parts of the theme soured me on the whole puzzle. Still, objectively speaking, CALIFORNIA and TOADSTOOL are great long Downs. I also like BREVITY, CEREBRA, SAINT PAT, and MANICURE. PERISHABLE and SPRINKLED are fine as well. The rest of the puzzle is remarkably clean as one would hope given that the four theme answers are only modest in length.

Here’s hoping this is just an appetizer for tastier treats to come this week. 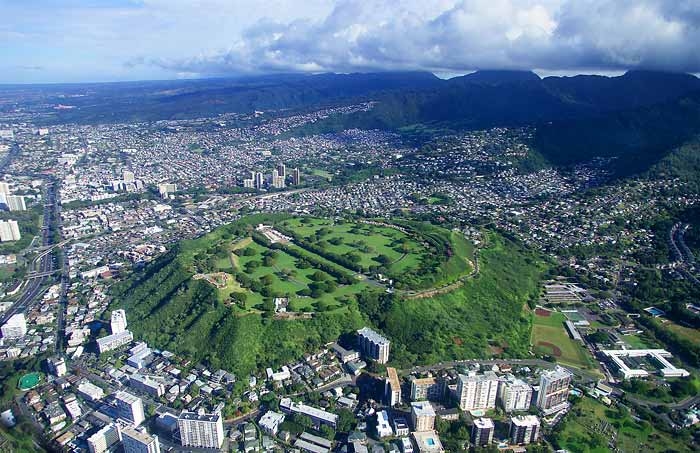 The Punchbowl Crater in Honolulu

Since we have PUNCHBOWLS immediately followed by OAHU in the grid, I was reminded of the Punchbowl Crater in Honolulu. It is part of an extinct volcano and home to the National Memorial Cemetery of the Pacific. I was a kid when I visited there in the 70s, so I don’t remember much about it, but its beauty and solemnity is still impressed upon me all these years later. I ask: Is this a theme anyone is excited about solving?

Great, now I'm thinking about a cream puff—which is something I already don't like—filled with skin cream. Gronk. Now that's a hell of a name for a football player. His team, uh, won the Super Bowl this year. I heard.

Do not get me started on deep dish "pizza".

This puzzle isn’t bad-bad, but it’s hurting me.

I’m back, and staying put for a while. I’m also jet-lagged, so I was surprised to look up and realized I had one of my fastest times ever on a BEQ themeless. This played more like an NYT T/W to me.

The NW corner was the last to fall. 8a [Keeper of Keys and Grounds of Hogwarts] was a gimme (it’s HAGRID) and I solved clockwise from there. What I didn’t know before I did this puzzle: that BIG PAPI (David Ortiz) holds the single-season HR record for the Red Sox. I, um, don’t pay attention to the Red Sox. Good day, everybody! We’re almost at the end now. The penultimate CrosSynergy crossword puzzle was written by Mr. Alan Arbesfeld, and we have six theme entries in this one. In it, common phrases or names are altered by adding one letter which, when adding that letter, will turn one of the words into a country.

So there’s all the nations being “built” in the grid, and then there’s PAKISTANI in there to top off the geographical references (11D: [Karachi resident]). Pretty much sloshed my way through this puzzle, and wasn’t too enthralled with the level of crosswordese in the grid. Definitely made me want to say NERTS (37D: [“Phooey!”]) every time I came across an ANSWER like that, including “nerts” (10D: [Get back to]). Honestly, not much more to say on my end about this grid, except for not believing that this is the next-to-last edition of CrosSynergy.

“Sports will make you smarter” moment of the day: BONE (4D: [Tibia or fibula]) – Remember Ken Bone, the spectacled, red sweater-wearing, supposed average Joe from the second presidential debate in 2016? I’m sure you do. But you know that there’s a different Ken BONE that has notoriety for being an assistant coach on the top-ranked Gonzaga University men’s basketball team? Before that, Bone was the head coach at Portland State and Washington State, as he led the former to its first two NCAA Tournament appearances in 2008 and 2009.

See you all for the final time on CrosSynergy tomorrow!