Flashback! Here’s the very first post at Diary of a Crossword Fiend, from 12 years ago. Thanks for reading along the way, and huge thanks to everyone who’s ever written for the blog! By the way, people, you know what I learned when I finally met Lynn at ACPT this spring? The emphasis is on the second syllable in her last name, not the first! I’d been saying it wrong for years. And now you all know.

Lynn’s theme takes things that start with letters that are pronounced alone, expands those letters into their word forms, and then clues the resulting phrases as if they have nothing whatsoever to do with those letters.

Cute. I am not a fan of crossword answers clued as spelled-out letters. Nobody talks about a CEE or a VEE. So I like how Lynn reworked those stale bits of crosswordese into something fresh. The 8-letter answers at 20a and 57a are longer than the four 7-letter themers, but it helps that the 7s are paired in rows of the grid. And the fill is pretty smooth with this grid pattern. I don’t love all of the fill, but the bits I don’t care for are ones I hadn’t even seen while solving, because easy Tuesday clues don’t require me to read all the crossing clues. (Note! In a tournament setting, you may want to check the clues for all the crossings.) 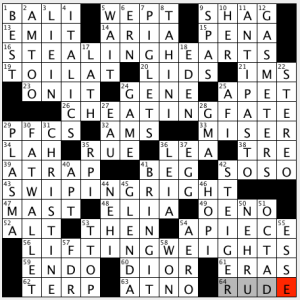 Appropriating its title from this Hitchcock gem about a rakish jewelry thief/cat burglar, today’s puzzle delivers the goods with a synonym theme. The first word of each of the four two-word themers is another word for “taking illegally.” And each entry is clued in a similar manner, beginning with a description of a type of thief followed by a fitb for the perp’s offense. The ante is upped in the third and fourth entries where there’s some welcome wordplay (yes… punning) amidst the metaphorical law-breaking offenses. To wit: 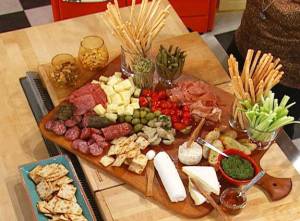 My mixed reaction to the theme execution was decidedly offset by the strength (and length) of the remaining fill. For starters, today we get four—yep—four nines (in two vertical columns): FAT WALLET, CHRISTINE, ANTIPASTO and GAS METERS. While the last is more functional than fun, those other three are rich. A non-body-shaming [Plump bill collector?] clues the first; as for the second, reading books by CHRISTINE‘s Stephen King has been a decades-long guilty pleasure of mine; and the third is clued with mouth-watering specificity as that [Starter replete with soppressata, olives and cubed provolone]. Buon appetito! In addition to the ANTIPASTO, there’s more of an Italian thang goin’ on, too, with TRE [Three, in Rome] and ITALICS, those [Slanted letters] that were first used in Renaissance Italy. (And in a nod to middle eastern cuisine, we get a sweet taste of TAHINI [Falafel sandwich sauce].)

A-V enthusiasts were, no doubt, delighted to see the PLASMA TV and STEREO system that gird the grid on either side, just as fans of great film and stage actors likely enjoyed encountering GLENDA Jackson and Rod STEIGER in there. The defensive colloquial expression [“I’m ready for you, buster!”] is well-met with the defiant “BRING IT!” And in a vein that’s a little more bucolic, we get PIGLETS whimsically clued as [Little pen pals?]. Then, just as those [Little pen pals?] do not refer to children who correspond with their peers in faraway places, neither do [Jar heads?] take us to MARINES, but rather to the more literal LIDS.

So, if there was some SO-SO fill in the theme, there was also plenty of sparkle elsewhere in the grid and in the cluing, making for an all-in-all entertaining solve, and one that I didn’t have to TOIL AT. Hope it was smooth and enjoyable for you, too, and (as always) that you’ll keep solving and stop by again!

ER is added to various two-word phrases to convert the second word into a type of baseball pitch. I’m not picking up on any significance of adding the letters ER to the base phrases. There doesn’t seem to be any references to Emergency Rooms or verbal pauses. More likely, it’s just that many of baseball’s pitches end in ER.

If you’re really into baseball, you probably liked this puzzle. For me, it was just okay. The theme entries are consistently constructed though I only knew three of the four pitches.

Interestingly, we get left-right symmetry today, probably more to do with the fact that the theme entries wouldn’t fit symmetrically in the “normal” style, being 15-, 13-, 9-, and 15-letters long respectively. But it does result in a happy-faced grid, maybe sending you subliminal messages of warm fuzzies. Or perhaps they’re meant to simulate seams on a baseball?

There are a great many references to baseball and pitches in non-theme clues, and I won’t list them all here, but I found those to be over the top. I could have done without the basebally cluing in words like FORD and LUKE ([Hall of Fame pitcher Whitey] and [Hall of Fame shortstop Appling] respectively). If the solver is not a baseball fan, why belabor the point?

I did like the fake-baseball clue for 50d DECAF: [Less-jolting joe].

But I was most disappointed when I had to erase nice entries NOTABLE and HARD-BOILED and replace them with less interesting NAMABLE and HARD-BITTEN (clued as [Worthy of mention] and [Cynically tough]). Thankfully, EXTRA EXTRA got to remain, so it became my de facto favorite entry in the grid.

Overall, for baseball fans, this puzzle is right over home plate. For everyone else, maybe high and outside.

Matt Jones’s Jonesin’ Crossword, “All for It” – Derek’s write-up So the letter IT in three phrases are replaced by the letters ALL, thus the title. This also appears to me to be a difficult brainstorm, especially when you have to find symmetrical lengths. I didn’t figure out the theme idea until I got to the second one, so that is why there is an error in the grid! I forgot to change it when I figured we were changing “battle of wits.” Many always stumps me; but at least no obscure punk rock bands in this one! (A few OTHER obscurities, though!) 4.3 stars today.

Some comments (and some of those obscurities):

That is all for today! Have a great one! So C.C. Burnikel had the Saturday puzzle, but not today’s. This is a constructor I am not familiar with, but I am going to assume by the name that they both are of Asian descent. This is a fine puzzle, with an odd feature of four of the six theme answers going vertically. What goes in the circles? the revealer at 60A explains all:

As always, pretend those red letters are circles! Various anagrammed sequences of the word GATE are utilized here. Very nicely done: 4.1 stars for my debut blog for this constructor!