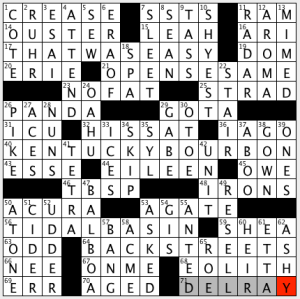 The non-Frostian “roads” we encounter in today’s puzzle nonetheless have a poetry all their own. For starters, as becomes clear in the reveal at 64A.—[Track on Bruce Springsteen’s “Born to Run” album (and it’s the puzzle’s theme!)] “BACKSTREETS”—we’re in fact looking for STREETS and not roads. How does the clue relate to the four preceding themers? The name of each STREET appears at the BACK of the theme phrase. That is, it follows the last word. What makes this tried-and-true gimmick so solid and snappy today is that both the themers and the STREETS they produce are simply first-rate. They take us to places both in our minds and on the map, and the words “lively,” “evocative,” “colorful” would be not in any way be misleading descriptors of the results. Imho. ;-)

Those are five fab themers in my book and the “roads” they take us to are a lovely lot as well. I also thought this was a terrific example of a satisfying solve for newbies especially. It’s always interesting, easily solved, the grid is very cleanly filled and it has a nice “Aha!” And that swell soundtrack to boot!

What with the length of the themers and their layout in the grid, however, there isn’t a lot of remaining real estate for long fill (one of the reasons this is an easier solve). I can’t make that a crime today. I found the theme and execution of it that strong—and I was that entertained, both in the process of solving and in the process of processing the solve. My faves among the remaining fill would have to include both CREASE and SHYEST, especially for their canny cluing: [Pants line?] and [Least likely to appear on “Bachelor in Paradise”] respectively. Also liked seeing explorer Vasco Núñez de BALBOA and the late, great EILEEN Brennan in there. If you’ve never seen The Last Picture Show, btw, you owe it to yourself to stream it, or borrow it from the library or look for it at a revival house. Great story. Great cast.

Oh—OUSTER appealed, because I get a little burst of optimism thinking about [Removal from office] (I leave you to draw your own conclusions…). And I particularly like HISS AT [Show disdain for, as a villain] and the way it’s followed immediately by a fine villain, IAGO [Shakespeare baddie]. But then, looking at the row straight across, starting at 31A—and being easily amused by such things—I got a kick out of what reads as a text message: ICU HISS AT IAGO.

And now UC me take my leave for today. Hope you’ll have a fine week ahead in our fast-departing autumn. If you’re not too busy making your own lists of who’s been naughty and who’s been nice, do keep solving—and see you back here next week! Two-pronged theme here. The revealer is 29d. [Often-forbidden maneuver … as hinted at four times in this puzzle], U-TURN, and in four places, a big letter U (made from circled letters) is turned in different directions … and each circled word is the name of a university that makes a U-turn in the grid. The schools are PRINCETON (hi, Jenni!), CLEMSON, CALTECH (hi, Doug!), and EMADERTON. No, NOTRE DAME. All of the college names travel counterclockwise. Elegantly conceived and executed.

The rest of the grid is unthemed, and the longest entries (PARIS METRO, EVIDENCE BAG, ADULTERANT, TRADE ROUTES) aren’t thematic. (ADULT E-RANT: screed from a potty-mouthed troll?) The fill is a little tough for a Tuesday. Not sure anyone under the age of 50 has encountered an actual ASPIC. LETT is crosswordese (though the plural would be solid, thanks to playwright/actor Tracy Letts). State-motto Latin ASTRA, URAL as a river, HESSE, meh. There’s a repeated ON in CHEER ON (which I really like) and START ON, too.

Jim P. here, sitting in for Laura. At my request, we swapped the next two days for this week. She’ll be covering the puzzle tomorrow.

Football! American football, to be precise. Today we’re given a before-and-after theme in which the after phrase is a position on a football team. For consistency’s sake each entry is a grid-spanner and each position ends in “BACK.” How do you feel about the repetition of BACK in each entry? It certainly made filling in the bottom entries quicker, but the consistency is nice, especially for someone who isn’t a football fan. The grid-spanning feature is also a plus. Still, I think I would have liked to see different positions like Right (or Left) Guard, Tight End, Strong Safety, Place Kicker, etc. Drat! PEYTON PLACEKICKER is too long.

All in all a solid grid. I can see how the non-football-fan might prefer to skip this one, but for everyone else, this hit just about right for a Tuesday. I’m still a little disappointed after the Michigan-Ohio State game this weekend. So let’s “fold” some stuff:

Of course, there is a revealer:

I suppose you do “fold” a rumble seat in the back of a car, but I cannot prove it because they are way before my time! Just kidding! It can easily be “folded” into the rear of a car it is in: As I said: these cars predate me! And of course we all fold towels, bad poker hands, and omelets. Nicely done. How about 4.4 stars today. This puzzle was FUN! Stacked 15s always get the blood pumping, and Matt has done a great job, especially since the puzzle played quite easy. That means there is virtually nothing obscure, and this puzzle was indeed a joy to tackle. The best entry is easily at 16A [November 2017 thriller with Denzel Washington in the title role] ROMAN J. ISRAEL, ESQ. I went to the movies this past weekend (!), but we saw Murder on the Orient Express instead. The Denzel movie does look intriguing, though. We will have to pay attention when Oscar nominations come out in a few weeks. On a side note, Grammy nominations were today. I did a fair bit of Googling of some of the more popular category nominees!! I digress. A solid 4.6 for this edition from Matt.

Some faves, including the rest of the 15s: