Rather long instructions this week; we are looking for a missing mystery woman and two one-word clues she stole. Four theme entries seem apparent (I’m assuming the central 3 of TIT, though a feminine reference, is not thematic):

So what’s going on here? I tried to think of mystery women, and thought maybe the “X” of the first entry might represent “Madame X,” but couldn’t seem to find other unknown women hinted at by the other theme entries. Then I wondered if I should do something with the feminine names in the clues: Nicole, Annie, Angelina, etc., but that also was a dead-end.

Since two one-word clues were stolen, my next idea was to look at the one-word clues that weren’t stolen, but again, both the clues and their entries seemed to be of no help toward the meta solution. Finally, I thought of the title again and thought it could be interpreted as a woman who wrote mysteries as opposed to being mysterious herself. That led me to the author Sue Grafton who is known for her “alphabet series” of mystery novels, starting with “A is for Alibi.” 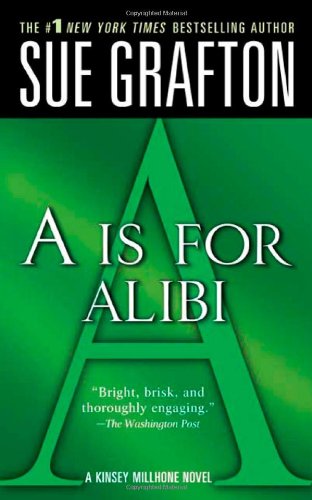 It’s funny, I didn’t recognize any of the four in the theme entries, but immediately thought of “M is for Malice” and recalled seeing the word malice in one of the clues. I felt the thrill of the hunt and uncovered these others in the clues:

That still left a lot of others, from alibi to wasted (I guess there’s no Z yet?), but I thought [Peril] could represent RISK and [Wasted] could represent HIGH. I probably could’ve been more thorough to find others in the clues, but I felt the important thing was that these 2 weren’t there. I think it was good that Peter picked less famous ones for his theme entries (well, famous to me anyway) and that he hinted at the clues being involved with his meta instructions.

I didn’t care for some of the fill–the K in GAK was my last entry, and then there was AALTO, ISSEI, the Irish boxer and a rather obscure SPERRY to come up with. I think of CTRL-X (exit) ending programs, but I suppose CTRL-Q (for quit) works sometimes too. Luckily I’m familiar with MCAFEE’s anti-virus software, now much preferred over competitor Kaspersky’s in our winter of discontent over Russian meddling in our recent presidential election.