Another easy theme this week, distinguished by the fine way it’s been executed. Taking a cue from the title, the circled letters in each of the four themers present a string of letters—strung out across the row—which spell out varieties of beans. What’s so special about the theme’s execution? For starters, each themer is a grid-spanner; and then there’s the range of content they draw on. This latter quality is something I take as a hallmark of Liz’s work and something I always look forward to when solving. It’s one of the things that makes “easy” puzzles attractive to experienced solvers as well as to newbies.

Other fill (and clues) that fall into the “I LIKE!” column would have to include HAD KITTENS (and not HAD A COW, for a change) for [Was extremely upset]; LOSES STEAM [Runs out of energy]; FLORAL, and not TRYSTS or DINNER in response to [Like some Valentine’s Day arrangements?]; ETHNIC, that [Word with food or group]; B-MOVIE [Second-rate film], so not, to judge by its critical reception, Fantastic Voyage; MOB HIT and not JUNIOR for [Whack job on “The Sopranos”]; VENICE and AT BEST. That’s a lotta good longer and mid-range fill, and by any stretch, none of it at all BANAL.

How did you do with ETI [Life in a UFO (anagram of 25-Across)]? At first blush, this was new to me, but then… when I understood that we were looking at “ET” as in “E.T., phone home,” and “I” as in IQ or AI, the light dawned. If the clever anagram tie-in to TIE didn’t help, [“BE OF good cheer!”]. This is why we have Wikipedia. Now maybe celebrate the “aha” with a LIME-garnished gimlet, or perhaps some PILAF and wine from the RIOJA region. [“NEED I say more?”] I don’t think so.

So on that culinary high, I leave you for today. Have a great week, keep solving and pop on in next week! 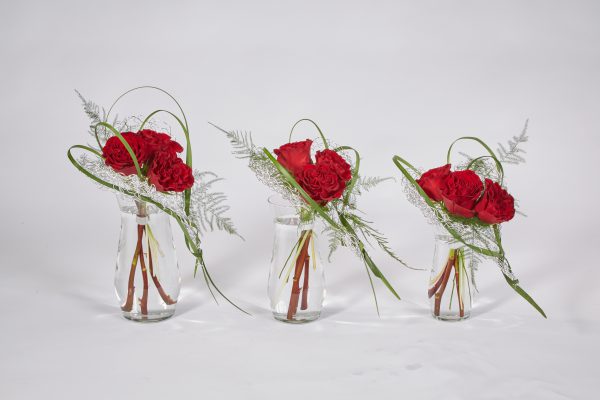 Terms relating to automobiles each have “corrections” — i.e. they are parsed as two words and clued goofily; hilarity ensues.

Nice set; can’t think of any more to add — maybe POWER TRAIN [Tough workout?]. One quibble, [34d: BTW equivalent]: FWIW — I get a wee bit confused with grids whereby the themers are the same length as a bunch of fill entries. But I managed. Same basic theme as Monday’s LA Times puzzle, which I solved about 5 hours ago. This is two too many “phrases with the same initials” themes for one day! (To be clear: I’d rather see zero … but I know these will continue to pop up from time to time.)

Elsewhere, we debit the puzzle’s account for having SAVED UP crossing USE UP, I HOPE SO plus I’LL BITE , and IN ERROR with IN HD. These are all fine alone, but I don’t love seeing them in the same grid. Overall grid liveliness doesn’t buy my forgiveness for all these dupes.

We’ll also ding this Tuesday puzzle for plunking OTOE, ESS, and that unfamiliar EVIE in the grid. Three stars from me. I am blogging this on my phone! As I write, my five-year-old is on my computer watching YouTube videos, and I don’t feel like chasing down my laptop! I probably will have O anyway, since I will have to add the grid image I just accidentally deleted! Matt has a freestyle puzzle this week with just 64 words. I will comment on the few entries in her that were new to me, but overall this was a fun solve, and not too hard either. I am again jealous of this kind of talent. A solid 4.5 today. I am constantly amazed at C.C.s grasp of English, since, as I understand it, English is not her native tongue. Some people just have a knack for grasping other languages, but perhaps not to the point of producing puzzles in that language! I have seen French crossword puzzles, and it seems daunting to me the level that you would have to know French to produce and enjoyable word game. Not only that, but C.C. seems to use, maybe even more than most, casual phrases in her puzzles. I will highlight several in the comments at the end, but I just had to say that right off the bat!

This puzzle has some circles, and another LAT trademark revealer as the last theme entry:

Nice idea, although not all of these lakes are actually on a border, unless lake Como in Italy borders one of its states, and it looks like it is entirely in the state of Lombardy. Lake Chad is in the southwest corner of Chad near Cameroon, Lake Erie is between the US and Canada, and Lake Tahoe is between Nevada and California. But we are talking wordplay here, so all is good, and this is only Tuesday. A solid 4.4 stars for this one.