Announcement: There’s a new weekly themeless crossword, coming out each Monday, in the New Yorker! It’s available online for free, and the rotating corps of five constructors includes Anna Shechtman (who has the debut puzzle today), Patrick Berry, Kameron Austin Collins, Liz Gorski, and Natan Last. Check it out! 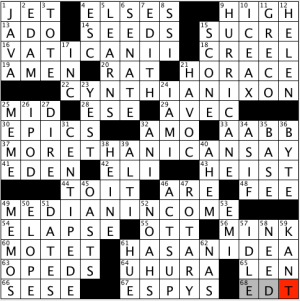 No argument. It is “a bit cuckoo in here,” since today’s puzzle is apparently a shout-out to that three-lettered cuckoo of crosswordese, the ANI. Embedded in each of the five themers, and bridging two elements within each, is the A-N-I sequence. No circles, I’m happy to say (and I didn’t even see it until now…), but we do get a reveal at 32D. [Cuckoo … and a hint to the bird that’s hiding in five horizontal answers]. With very straight-forward cluing, our theme set today is made up of:

When Liz sent me this puzzle, she did say that for various reasons, this one might seem a bit “wobbly,” and while it doesn’t make me happy to say so, I have to agree. It happens. Even to the best of constructors. And I do put Liz right up there. I fear the problem starts with the IDEA itself, that of embedding this particular series of letters in a theme set. I’m someone who actively likes embedded-word puzzles—particularly when I can suss out the word-in-question with only a hint from a well-honed title (like today’s). And I especially like them for newer solvers. Typically, Liz’s embedded-word puzzles yield charming theme-set results. To my eye, however, there’s little sparkle to be found within this one, so the entries present as more functional than fun. As a result, the solve itself is not particularly entertaining. Or wasn’t for me. As always (and it’s important to say this, too), in this subjective territory, your mileage may vary.

What did I take pleasure in? Well, I like those two long, strong downs: HURRICANE and CENTIPEDE, and some of the mid-range sixes, like ACTS UP, ROTARY, ELAPSE and HORACE. One of the reasons HORACE appealed was because of the reminder we get in the clue—that he was the [Poet who coined “carpe diem”]. Now the Roman HORACE was born loooooong after the Trojan War was fought with Greece, but (conjuring up Homer) we get a little more “classic” fill/cluing with combos like EPICS [Grand stories] and HELEN [Beauty of Troy]. The Iliad and The Odyssey, anyone? Another clue that spoke to me, this one far more contemporary (but a corollary of HORACE, in its way): [“Your time is limited, so don’t waste it living someone ELSE’S life.” (Steve Jobs)]. Wise words indeed from the man whose company brought us the iPOD.

And because my time is limited and I’ve made my salient points, I’m going to draw this post to an end. Oh! But not before sharing this very exciting development for lovers of challenging themeless puzzles. Starting Monday April 30th, The New Yorker will be publishing a weekly puzzle—online only—by a superb rotation of constructors: Anna Schechtman, Natan Last, Kameron Austin Collins, Patrick Berry and… Liz Gorski. For themeless-lovers, it doesn’t get much better than that. Check it out! Check it out! If you’re not a subscriber, do confirm whether or not you have access—please (I think you do, but it’d be great to know for sure). Thx for stopping by today. “Tomorrow is another day” and next week will bring us another puzzle. Hope the week ahead will be a good one. Meanwhile, like you, I’ll keep solving. ;-) My loved ones, have you got yourself some Women of Letters yet? Crosswords by 18 women constructors for the low, low price of donating $10 or more to a woman-centric charity. On the “masthead” for the project, my name is above Ms. Burnikel’s, because we’re in alphabetical order, and believe you me, when I first started making puzzles, I never imagined that someday my name and her name would be on the same project. In my personal pantheon of admired constructors, she has an honored place. On to the puzzle:

Perfect early-week theme, lovely in execution. Fill is a MIXED BAG: OHO! AS IT IS, I MEANT IT. Can anyone remember who sang [8d: “Never ___ Give You Up”]: GONNA? He was certainly no [9d: Postgame sulker]: LOSER. Interesting choice to clue ERNEST as [44d: Physicist Rutherford] rather than [Novelist Hemingway] or [Explorer Shackleton] or [Wilde’s ___ Worthing] or [Character who addresses Vern]. G’DAY all. Solid Tuesday offering this week. The revealer is 64a. [Obstacle … or any one of four black squares in this puzzle?], ROADBLOCK, and the theme lies in the circled words, each of which spells out a kind of road that’s split by a black square, a roadblock of sorts. AVENUE is split between SLAVE and NUEVO LEON. LANE’s roadblock appears between SHANGRI-LA and NETS. AIMLESS/TREETOP hides the STREET, and a DRIVE is in PAID/RIVERBANK.

What else? Let’s take a look. Let’s add some N sounds! To be specific, let’s add N sounds that have a silent K in front of them!

I feel like I am missing one, but there are three theme entries. Maybe because two are only 10 letters, but then I am thinking this is NOT the easiest theme to execute and there are three very good ones in here. Is there a convention for how many squares in the grid should be theme related? Even if this was themeless, there is still a lot of fun in this grid. 4.3 stars today.

Have a good week all! My timer didn’t work properly, and I was interrupted two or three times while I was solving this one. I think I paused the timer and forgot to restart it, so I guess the timer is NOT the problem! Total time was somewhere in the 4-5 minute range, I think.

The theme on this one was not evident until the end, but it was fun to try and figure it out! They progress until the common thread is explained at 58A and 60A:

I kinda thought we were dealing with kitchen implements as I worked through the grid, but this was a nice “a-ha!” moment at the end when you realize these are all found in one of those fancy pocket knives. I had one of these as a kid; I don’t much have use for one now. At least I think I don’t! Perhaps I will put this one on my wish list! A solid 4.3 stars today.