I finished this puzzle and had to go back and suss out the theme, even with the revealer. It’s not difficult; I think I just went too fast and the theme didn’t register. Once I got it, I liked it.

We have three theme entries and a revealer: 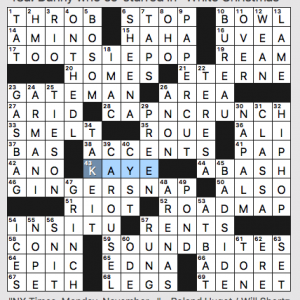 And the revealer: 59a [Broadcast news snippets … or an apt description for 17-, 28- and 46-Across?]. Those would be SOUND BITES. Each theme answer is a food that contains a kind of sound: POP, CRUNCH, and SNAP. Not quite the Rice Krispies sounds, but close!

What I didn’t know before I did this puzzle: that Danny KAYE co-starred in “White Christmas.” We didn’t watch Christmas movies when I was a kid. I didn’t see “It’s a Wonderful Life” until I was in college.

I’m surprised this isn’t a sports-themed puzzle based on all the throws and stretching! :D 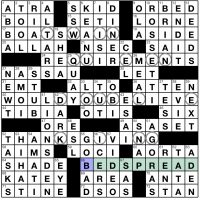 This was a cute theme! The circled letters in each themer are spread out and spell out a different bed/quilt size. The revealer made me smile, which is one of the points of solving, right? This is also quite a lot of theme real estate, so it makes sense that the rest of the puzzle suffers a bit. Not to throw SHADE on this puzzle, but ATRA ORBED SETI NSEC DSOS (especially when crossed with SAS) OBI AMATI felt a bit tough for a Monday. It’s always a tough balance of how much theme content to include vs. how rough does that make the rest of the fill, and I know I rarely get it right myself. In all, I’ll remember this puzzle more for the theme than the less-than-ideal fill, so I’d chalk that up as a win.

#includemorewomen: We have a nice slate of women represented in the grid today: KATEY Sagal, Christina ROSSETTI, TESS of the D’Urbervilles, and EVIE Sands. But, compare those with all the men in the grid and it’s not quite on balance: LORNE Michaels, “Sloop John B”, Maxwell Smart, OTIS, R.L. STINE, STAN Beeman, KEANU Reeves, Monty Python and his Life of BRIAN, Mr. Met, NEWT Gingrich, Hardy, Simba, and ESAI Morales. 4 women vs. 13 men.

I guess my call each week is for constructors to expand their word lists and/or clue more readily with respect to women. Can we? I know one group of constructors who can – the amazing women over at The Inkubator, who will soon be delivering “crossword puzzles by women — cis women, trans women, and woman-aligned constructors” on a regular basis! Check out their Kickstarter, which has already been wildly successful to hop on this important and groundbreaking project!

Our central revealer today is MAKING A RUN FOR IT and it’s clued [Fleeing, and activity by 17-, 21-, 55- and 64-Across]. Each of the people at those locations is making a run for something. 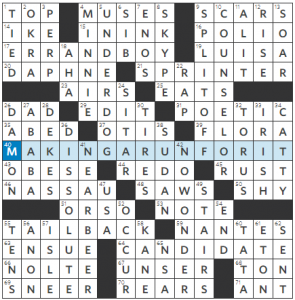 In this kind of theme, it’s considered to be more elegant when the theme answers use the word in question all in the same way or all in different ways. My first take was that the middle two used “running” in the same sense (i.e. physically), but when I really applied the revealer, (i.e. looking at the “it” they were running for), they had just enough difference to make it all work.

The grid is really beautiful with loads of long goodies: UNDERDOG, COUNSELOR, DISSOLUTE, NEAR BEER, NO WONDER, and SPLIT OFF as well as POETIC, NASSAU, DAPHNE, MINNIE, and NANTES.

The usual suspects can be found here and there (ANON, OR SO, ABED, etc.), but on the whole, I was enamored with all the lovely fill to be too bothered with them. 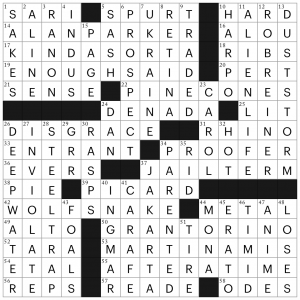 Ben here, on New Yorker duty for the first week of November.  It’s Patrick Berry week over at the New Yorker, which means I get to solve Patrick Berry themelesses TWO days in a row.  What a delight.

This lacked a little bit of the more modern references I tend to like in the New Yorker puzzles, but that’s fine, because this was a solve that felt both super-smooth in terms of moving through the grid AND super crunchy in terms of cluing that made me think for a second.  Truly a   crossword puzzle that satisfied.

The long horizontal fill had a nice mix of proper names and phrases – ALAN PARKER (Director of “Fame” and “Pink Floyd’s The Wall”), MARTIN AMIS, and Clint Eastwood’s GRAN TORINO for the former, and KINDA SORTA, ENOUGH SAID, and AFTER A TIME for the latter.  I’d throw PINECONES in there as well – the official state flower of Maine, it turns out.  Other horizontal fill I liked: DE NADA, RHINO (per its clue, a bloat is a group of hippos, and a crash is the name for a group of rhinos – love a fun fact like that!), PICARD (who likes his Earl Grey hot, much like I do), and Duane READE, a chain of drugstores we don’t have up here in MA.

On the downward side of things, more nice fill like ALIEN LIFE (today’s featured clue, per the little pop-up you get after the puzzle’s done), ROB REINER, and DUST STORMS in the upper right, and DEEP-WATER (oil drilling), INVIOLATE, and STEEL TRAP in the lower left.  HARPO Marx is the horn-blowing member of the Marx Brothers (the vaguely-hinted “old vaudeville troupe” of that particular clue), and GRR is the appropriate frustrated noise to make in the puzzle, rather than UGH or GAH as I initially thought.

All in all, I missed the usual high/low pull from recent culture I look for from other New Yorker constructors in this one – this was well-constructed and a fun solve, but feels like it could have safely run 4 or 5 years ago in the NYT without too much issue. 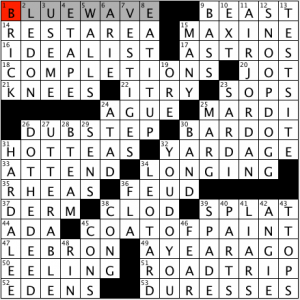 Wow was this ever a [9a: Monstrosity]: BEAST. Not even going to post my time. But I will post five things: