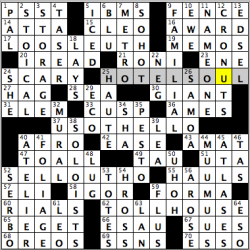 Hello there, everybody! I hope you are doing well and have recovered/are recovering nicely from diving into a chockfull of black-and-white squares solving PuzzleMania from the New York Times on Sunday. Today’s crossword puzzle is more fun with anagrams, as the first four theme entries are anagrams of TOLL HOUSE, the brand of cookies that also is featured in the grid as the reveal (62A: [Popular cookie that’s “mixed up” to create four wacky anagrams]).

Just for fun, I initially attempted to solve the puzzle doing the downs only for my first-ever downs-only attempt, but then was stopped by two factors: my wandering eye which always caught an across clue and the “-al” ending in STOICAL that threw me off since I was expecting to fill in “stoic” before seeing the extra amount of letters needed in the answer (2D: [Showing no emotion]). Liked the clue for SAMOA, which definitely got me into the mood for a snack after solving (26D: [Girl Scout cookie that’s also the name of an island group]). I remembered coming across CUSP during an anatomy class and having my mind blown because I had used the word thousands of times beforehand but had no idea there were other uses for the word outside of being on the cusp of some sort of personal/team accomplishment (33A: [Astrological point]). That same feeling of awe also happened when I first came across the same word in a crossword a few years ago and had an astrological reference. No such feeling of awe today, but definitely felt that when looking up CRONUT and finding out that it’s a very recent invention, created back in 2013 in a bakery in New York City (12D: [Sweet-and-flaky hybrid pastries]).  As the saying goes, “Time to make the Cronuts!” Or something like that…

“Sports will make you smarter” moment of the day: METRO (7D: [Paris subway]) –  My sports fandom goes so far back that I remember the days of the METRO Conference, a one-time Division 1 athletics conference formed in 1975 and named as such because its six founding members — University of Cincinnati, Georgia Tech, University of Louisville, Memphis State University (now the University of Memphis), Saint Louis University, Tulane University — all were located in urban metropolitan areas. The league was a major player nationally, in large part because Louisville was a basketball power that won the men’s basketball national championship in 1980 and 1986 during their its in the Metro. (Also, Memphis State made the men’s Final Four in 1985.) The league dissolved in 1995 when it merged with the Great Midwest Conference to form Conference USA, which exists to this day.

And that’s a wrap! Thank you so much for your time once again, everyone! Have a great rest of your Tuesday and, as always, keep solving!! 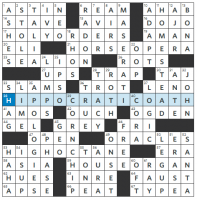 A pretty straight forward theme type of H___ O___ entries, though this puzzle took longer than my average time because I’d never heard of HORSE OPERA or HOUSE ORGAN. I also got stuck at 4D – there’s apparently a Christmas song called “The Holly and the IVY“, but that’s new to me, so I got stuck at 1A (AST_N) and 14A (STA_E). I can never remember what vowel goes there in Sean ASTIN’s name and I apparently need to study up on my barrel parts a bit more. STAVE!

What else stuck out about this puzzle for me? I learned that MASERATI has a trident logo, I appreciated the crossing of door SLAMS with argument-ending APOLOGIES, and I was fine with the dupe at LEG UP and IS UP, only because it made me imagine what a feminist response to the leg lamp from A Christmas Story would look like. I’ll take suggestions in the comments section. : )

Not a single woman in the grid other than TALIA Shire, CORA from “Downton Abbey”, and a reference to Hepburn in the clues. OUCH. 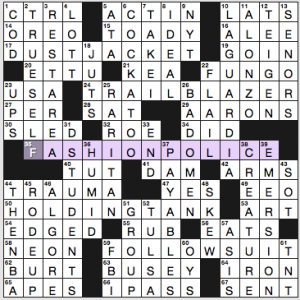 Having just realized I was supposed to blog the New Yorker crossword for the Monday post, let me be brief here. Theme revealer is 35a. Wearers of 17-, 24-, 50- and 59-Across?], FASHION POLICE, and the other four themers are non-clothing terms clued as if they were apparel worn for specific law-enforcement tasks:

I PASS has an awkward clue (66a. [“You can skip me”]), and I wish Illinois’s IPASS tollway transponder were nationally known.

12d. [Model Chrissy who wrote the best seller “Cravings”], TEIGEN. If you’re on Twitter or Instagram, you could do worse than to follow her. She’s pretty funny and relatable, despite being a TV celebrity married to a goddamn EGOT winner (John Legend). (If you hate pop culture, just move on and don’t tell us again.) 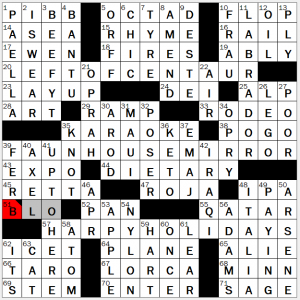 I think there may be more examples of half-human, half-animal creatures, but the solver should be familiar with these three, which for some may just be nightmare fodder:

Did I mention they are clued in a punny way?  Only three themers, but the last one doubles as a timely phrase. With the holidays Xmas and New Years on Tuesdays this year, perhaps the next two Jonesin’s will be likewise timely in theme, or perhaps slightly harder than normal? I have no idea, I just blog them. I was going to post pictures of these creatures, but I don’t want to scare anybody! Google them yourself! 4.4 stars this week.

The year is just about over. Time sure does fly! 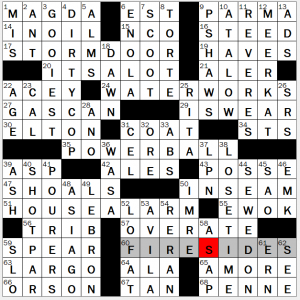 Under 3 minutes!! I don’t usually get a puzzle done this quickly. I just don’t seem to be able to solve that quickly online, although this time I solved this on my desktop PC (I normally do these on my MacBook); maybe I will try that more often.

Where’s the fire? In this grid! (Pretend the first four have stars in front of them!)

We are all familiar with most of these words and phrases: Firestorm (a superhero!), fire door, fire water, fireworks, fire power, fireball, fire house, and fire alarm. I enjoy these types of puzzles that use both ends of the theme answers. Nice theme for an easy Tuesday; nice job, Gerry! 4.2 stars.

Enjoy your week, everyone!