This is what I want from a Monday puzzle: a consistent, accessible theme and solid fill with a minimum of crosswordese.

This is a “find the common thread” theme. 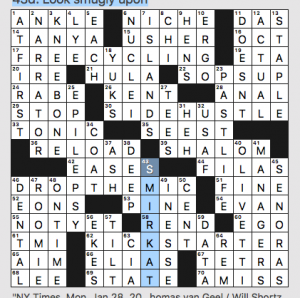 What ties them together? 62a [Crowdfunding site … or a hint to the beginnings of 17-, 30- and 46-Across]: KICKSTARTER. The START of each theme entry is a kind of KICK: FREE KICK, SIDE KICK, and DROP KICK. SIDE KICK doesn’t sound all that familiar to me, but the only sport I follow is baseball and there’s no kicking in baseball. I like the 21st century feel to the clues and revealer. There’s nothing musty about this puzzle.

What I didn’t know before I did this puzzle (or at least before I wrote this blog post): that the KNEE BONE song was written by James Weldon Johnson and is a spiritual based on a text from Ezekiel.

We have an anagram theme today with the revealer MASTER SWITCH (58a, [Main shut-off, and a literal hint to the ends of 20-, 31- and 47-Across]). Each theme answer’s last word is an anagram of MASTER. 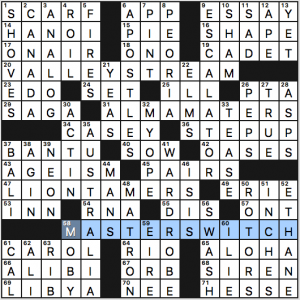 Solidly executed theme. MASTER SWITCH makes for a good revealer, and for once, plurals in the theme answers aren’t there out of symmetrical necessity, but anagrammatical necessity. I’d never heard of VALLEY STREAM, but the crossing were all easy enough.

I had a couple of mistakes during the solve: EPIC for SAGA (29a, [Heroic story]) and RAMP UP for STEP UP (36a, [Increase, as production]). Oh, and despite having ERIE at 49a, I got rid of the I to put in ARCHES at 51d [Foot parts]. Got me with that one. I quickly switched it back to INCHES.

Other than those missteps, which were entirely my own fault, this is a very clean grid. AUSTRALIA and ESCALATOR (with the lovely clue [Nonstop flight?]) are our long Downs along with APOSTLES and WARDROBE. MYOPE [Nearsighted person] and BANTU [Congo language] are the toughest bits of fill.

Is it hot in here? It certainly isn’t for these theme entries: 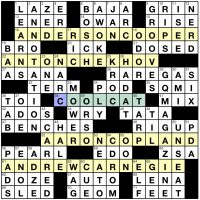 I really dug this theme! Each of the theme entries has the initials AC and, with air conditioning, each of these men would certainly be a COOL CAT. I appreciated that the revealer didn’t just include AC, but asked the solver to take that one extra step of putting all the pieces together. Nice!

Bonus points to the constructor for having as much theme fill as she does without so much fill that makes me say ICK (aside from ENER OWAR SQMI RIC ENOL).

Minus points for every theme entry being a white dude. I mean, two of them are gay, so there’s that, but women and people of color can’t be COOL CATs, too? Audie Cornish, Agatha Christie, and others would like a word.

Bonus points for this puzzle being by a woman constructor and for women being included in the grid.

Minus points for those women in the grid being from a different era (ZSA) or problematic (LENA Dunham).

Overall, I enjoyed the theme and cruised through the puzzle at a rapid clip. A bit more diverse representation across the theme/puzzle and I’d be fully smitten!

Ben’s having a busy day at work and I have a bit of a lunch break, so here I am with Natan’s lovely puzzle. This was not particularly difficult and I enjoyed it thoroughly.

We start off at 1a with [No animals were harmed in its making], which is not a film, TV show, or cruelty-free makeup product, but rather LAB GROWN MEAT. I realize that there’s no scientific reason for my “ick” reaction, and yet – ick. 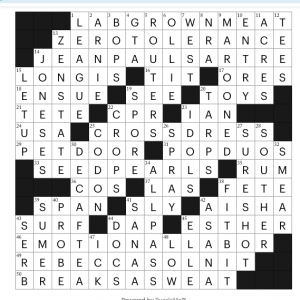 I really liked the rest of that top stack. I’m sure there are people who have ZERO TOLERANCE for JEAN-PAUL SARTRE. Great clue for the latter: [He said, “When the rich wage war, it’s the poor who die”].

Other things I enjoyed:

Loved, loved, loved the bottom stack: EMOTIONAL LABOR/REBECCA SOLNIT/BREAKS A SWEAT. The clue for 49a references Solnit’s groundbreaking essay “Men Explain Things To Me.” If that’s new to you, read it now. {Rant about our comment section deleted}.

What I didn’t know before I did this puzzle: that the DAP as a greeting originated among black soldiers in Vietnam. 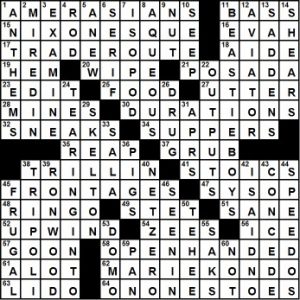 Totally jazzed by a 27:54 time! That’s breakneck speed for me on a super-challenging and enjoyable crossword. Why, I almost struck a NIXONESQUE pose when Mr. Happy Pencil appeared as I guessed that a K, to make SAKS 55d‘s [Bergdorf Goodman rival], was the likeliest suspect to make sense with MARIE _ONDO at 62a [Organization consultant with the Netflix series “Tidying Up”].

I liked the double-duty clue [Comestibles], a word I don’t see much of, but which I knew had something to do with eating. It yielded FOOD at 25a and  GRUB at 37a.

Other highlights for me were

11a [Flea instrument] BASS–I didn’t know the artist Flea until today.
17a [The Silk Road, famously] TRADE ROUTE
21a [Longtime Rivera catcher] POSADA–This was a bit of a giveaway for some, I’m sure, but it allowed me to reflect on Yankee catchers that I was able to remember. Yogi Berra was it when my memory kicked in, followed by Elston Howard. And then there was Jake Gibbs. Growing up in Mississippi, I watched Gibbs, a triple-threat quarterback, lead Ole Miss to an undefeated season and a share of the National Championship his senior season (1960?). I think Gibbs started one year for the Yanks, but was mostly a back-up for Howard and then also for Thurman Munson. Jorge Posada is the only other Yankee catcher I remember knowing about while he played. The best known Yankee catcher in my home area, of course, is Bill Dickey, who played from 1928-46 and is said to have mentored Berra.
58a [Generous] OPENHANDED–One word, this. No hyphen.
61a [Quattuordecillion, say?] A LOT–Two words, this. It was the clue that I liked. That number, btw, looks like this: 1,000,000,000,000,000,000,000,000,000,000,000,000,000,000,000.
64a[ Alert] ON ONE’S TOES–An early guess, AT THE READY, primed me for a 3-word answer.
7d [Woodlouse or pill bug, e.g.] ISOPOD–I’m really proud of a correct guess here, after the O’s popped up in crossers.
8d[___ solution AQUEOUS–Another guess, facilitated only by the Q.
11d First rap group to have the #1 album on the Billboard chart] BEASTIE BOYS
24d [Scolding harshly] TEARING INTO–I confidently guessed INTO early and, obviously, that bore fruit.
40d [Los Angeles-based ISP] NETZERO–This company spells its name with the N and the Z as capital letters.
42d [“Forget about it!”] I SAID NO
44d [They’re barely seen on the beach] SPEEDOS–None of my early guesses, centered on the word nude, would fit in the space.

Checking the clues one final time for a nit or two … I got nothing! Can’t believe it took me so long. Should have been as smooth as a silk road! 4.5 stars.