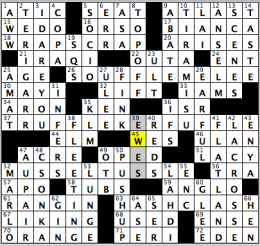 Hello once again, everyone! Hope you’re all doing well today. Today’s crossword is a little bit of rhyme time with food, though there’s definitely an pugilistic edge to it! Each of the theme entries is a pugnacious pun in which the first word is a type of food while the second word, which rhymes with the first, is a word that describes types of fights. It’s a food fight, indeed!

First off, I DARE YOU to find too many issues with this grid (3D: [“Go ahead, make my day”]). Of course, I’m being hyperbolic, especially with a bit of crosswordese in the grid, but, again, I normally look over that since that’s not so much a spot of bother for me that I have to sit here and lament about it, at least for the most part. There is a lot of long, scrumptious entries in the grid, including the non-themed food of TIRAMISU, a phrase that would be hard to pair with a fighting synonym (10D: [Italian dessert made with ladyfingers]). How about “tiramisu set-to?” Actually, that kind of works, don’t you think?

Though short in its appearance, I think I liked FINK the most of all of the non-themed entries today (28D: [Snitch]). Why? It’s just so much fun to say, though I hope I never have to personally call someone that. Actually, I hope I don’t engage in any shady behavior that would lead me to call someone that! OK, time to retreat back home and make sure that possibility doesn’t unfold, at least for tonight! :-P

“Sports will make you smarter” moment of the day: CSONKA (48D: [Football Hall of Famer Larry]) & ORANGE (70A: [Carrot color]) –  Talk about some serious (Cross)synergy! Former Syracuse University ORANGE great and Miami Dolphins fullback Larry CSONKA was one of the driving forces of the team that remains the only squad in NFL history to finish an entire season in the Super Bowl era (playoffs included) undefeated, the 1972 Miami Dolphins. In Super Bowl VII, the win by the Dolphins over Washington to complete perfection, Csonka ran for 112 yards on 15 carries as Miami repeated as Super Bowl champions. One year later, in Super Bowl VIII, Csonka rushed for a then-record 145 yards and two touchdowns, winning the game’s Most Valuable Player award. Of course, most people remember Csonka as one of the hosts of the late 1980s/1990s athletics competition show, American Gladiators.

Let’s see what “Former Lives” our constructors are summoning up today: 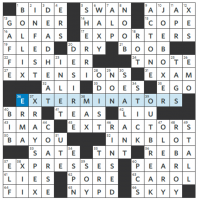 17A: EX-PORTERS [Retired redcaps?]
27A: EX-TENSIONS [Results of a great massage?]
36A: EX-TERMINATORS [Arnold Schwarzenegger, Robert Patrick, and Kristanna Loken?]
45A: EX-TRACTORS [Recycled John Deere machines?]
57A: EX-PRESSES [Book publishers who have moved on to better things?]

I like how the title tied into the clues and theme entries for most of the theme set. Porters and terminators are people who’ve left those former lives, while presses and tractors once had a use in a former life. Ex-tensions feels like the outlier to me in this set, especially with respect to the title, but I overall enjoyed the puzzle. I had a tough time breaking into the NW corner, likely due to BOLLIX and DEADHEAT crossing ALFAS, none of which I could immediately grok. The rest of the puzzle fell smoothly for me and there was little cruddy fill, which is nice given a grid with so many XES.

Random thoughts:
– The AJAX/XES cross in the NE corner is a little wink from the constructors saying, “Yeah, we had to deal with all these XES in the grid, and we still found room for one more than we didn’t even need!” A gold star also for XRAYSPEX and JOEBOXER. That second X in each entry was one the constructors didn’t have to include, but each elevates the puzzle, for sure.
– There is a lot of female representation in the grid today, which I certainly appreciated: ALI MacGraw, DOES, Lucy LIU, REBA McEntire, SHERRI, DESIREE, ERMA Bombeck, and Ms. O’LEARY.

That’s all for today. Overall, I enjoyed it! 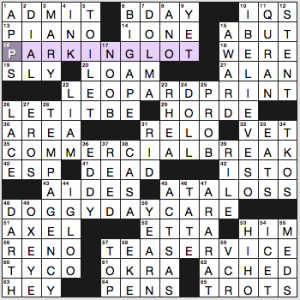 Things with “spots,” that’s the theme:

The longer entries TEMP AGENCY, “I BELIEVE SO,” and “LET IT BE” are welcome sights. 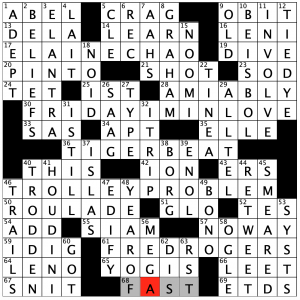 Back to blogging the Jonesin’ this week! Thanks for all who subbed for me while I was out. I am ashamed to say that I did not get what the theme was for this puzzle until the very end, because the theme is one of my favorite childhood memories:

If you have not seen this documentary yet, stop what you’re doing and do watch it. It is on HBO On Demand as we speak. I think I admitted this in this blog several weeks ago when I saw it in the theaters, but I cried and cried watching this. I have seen Daniel Tiger’s Neighborhood once or twice, but it just isn’t the same! (Perhaps because I am not 5 anymore!) One of the nice things about solving puzzles is when they bring a smile to your face; this one accomplished that in many ways. A solid 5 stars from me!

What I did find on Spotify was a playlist of songs sampled by De La Soul on 3 Feet High and Rising. Guess what song is on there? Enjoy! 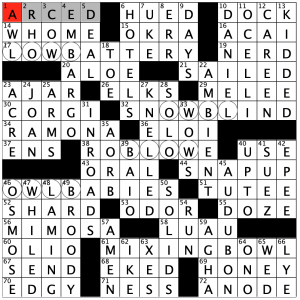 It is a little cool that my solving time of 3:05 matches the date for this puzzle! I think I had this one figured out well before the revealer at 61A:

Very nicely done. This is definitely a theme idea that would not be possible without the circled squares. I don’t think I am, in the big picture, a fan of circles in crossword grids in general, but these types of puzzles are at least different, and that is fine with me. It also makes for an easy solve and the theme is plain to see: the letters in BOWL are definitely mixed up in the theme entries. Keep it simple! 4.2 stars today.

Back at it! Just so you know, this was one of my views at this time last week: 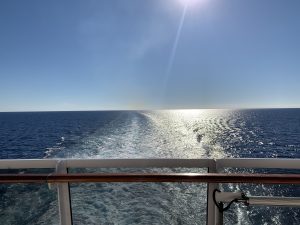 Currently sneaking in a quick write-up while administering a test in class… holding down two jobs, if you know what I mean.

THEME: Notable people with last names that translate into a job unrelated to their individual careers.

I enjoyed the playfulness of the clues throughout, and the clean fill that included HOUSE RULES, SOFT BOILED, and CARHOP. I forgot that one indeed CHEWs a Tootsie Pop in order to finish it, LICKing comes prior (but I had that old commercial in my head… you know, the one about how many licks it takes to get to the center).

Anyone here have a last name that means anything? I’m guessing mine means “Calendar Model” (since the surnames in the puzzle is what they definitely are not, that is).

One little nit: Would’ve liked to see the theme answers going down which would have jibed better with the title, in my opinion.