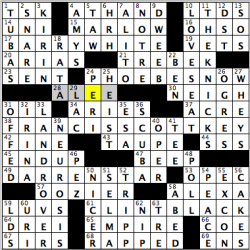 Crossword Fiend puzzle solution, Week 425: “Members of the Board!”

Good day, everyone! Here is hoping all is well and that most of you did not have too much difficulty during the heatwave of 2019!

Today’s crossword puzzle will not leave you bored, but it definitely deals with a lot of boards, with each of the five longest answers ending with a word that also can come before the word “board.”

Outside of Kelsey Grammer, the only person whose name I surely remembered being on the cast of Frasier was David Hyde-Pierce (Niles), so getting PERI (Gilpin) was a little bit of a slog today (24D: [One of Kelsey’s “Frasier” co-stars]). Absolutely in love with the clue for LUVS diapers (59A: [Producers of bum wraps?]). I might have said this before on here, but, if I haven’t, then I’m making sure that I tell you now that I recommend that you watch SELMA, just one of the wonderful movies and productions from the mind of Ava DuVernay (21D: [2014 film by Ava DuVernay]). Finished her latest work, When They See Us, chronicling the heartbreaking and maddening story of the group known as the Central Park Five, and it is borderline required watching. Knew it was a huge deal back when I first encountered it when I was just under 10 years old, but, this four-episode recreation really makes the angst and anger hit home once they detail the treatment of them by authorities (lawyers, police), celebrities and the public when the story first came out. Hope you have a Netflix account!

“Sports will make you smarter” moment of the day: THE KNICKS (11D: [Walt Frazier led this NBA team to the franchise’s only two NBA championships]) – One of the flagship teams of the current top basketball league in the country, the New York Knicks played in the first game of the history of the National Basketball League (then called the Basketball Association of America, or BAA), on Nov. 1, 1946, against the Toronto Huskies at Maple Leaf Gardens in Toronto. Yes, the first game in the history of the NBA, arguably the most popular league in the world and currently featuring 29 teams headquartered in the United States, originated in Canada. (Of course, the game of basketball’s creator, Dr. James Naismith, is also Canadian.) 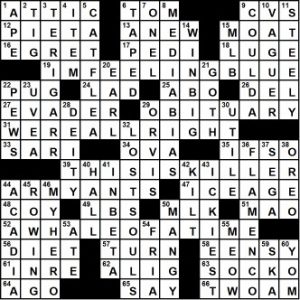 THEME: Max offers phrases, the last word of which may precede whale. As to the title, dictionaries define the verb breach “rise and break through the surface of the water,” noting that it’s said of a whale and takes no object. I did not know this. I also did not know that a right whale was a thing. Check it out: 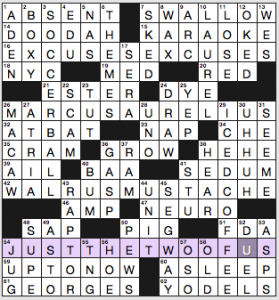 In this 14×16 puzzle, my fellow Chicagoan Kyle riffs on the 1981 Grover Washington song “JUST THE TWO OF US” ([1981 hit with the lyric “We can make it if we try” … or a possible title for this puzzle]) which I don’t think I remember (though the songs that kept it from the #1 spot on the charts are super familiar to me). The other three themers contain US twice: “EXCUSES, EXCUSES!”, MARCUS AURELIUS, and a WALRUS MUSTACHE.

I’m going to deduct seven stars from my rating for 38a. [Giggle], HEHE. People have got to stop typing “he he.” “Hee hee,” if you must. Please. Never “he he.” That’s just a coupla pronouns strung together. “He” is not a laughter syllable, not spelled that way. *gavel gavel* 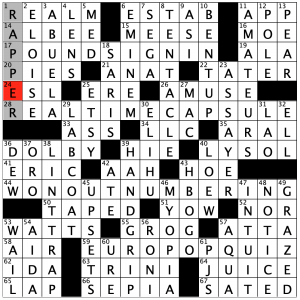 Some people would love some “starter cash” to start their own business venture; I am NOT one of those people. It would be great to make money doing crosswords, but I don’t have that kind of time and I don’t think I have the talent that the ones that do make a living at this have. Maybe I am wrong; I surely have more talent than Timothy Parker! Let’s examine how this puzzle relates to cash:

Did you know they used a won in South Korea? I did not. At current exchange rates, if you had 100,000 ₩, you would have about $85. I have no idea if I wrote that correctly! Nicely done; not too complicated, and lots of interesting fill. 4.2 stars.

Some of that interesting fill: 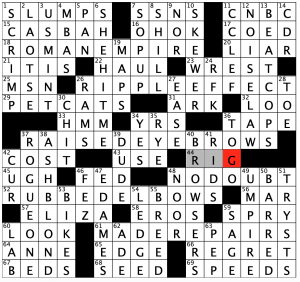 I didn’t understand this theme at first, but now I get it. Sometimes it takes a minute!

Get it? Perhaps it should be read MADE R-E PAIRS and that would help! All of the theme answers simply have the initials R.E. I think I just overthought it!

I will stop here. It didn’t Tuez! Have a great week. 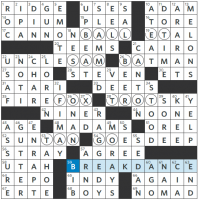 There was a lot that I liked about this puzzle!
– The title was cute, apt, and effective. “May I Cut In?” referenced both the dances themselves, and the fact that a black square had, indeed, cut in to separate each one.
– The visual of the finished puzzle was also nice, in that the circled squares start at the top right and slow transition down and to the left. That’s a nicely executed construction constraint!
– The clue for 68A BOYS [Roughly half of a typical kindergarten roster] leaves room for more than two genders and for gender non-conforming kids. THAT is the way you write an inclusive clue. : ) (Think kids that age are way too young to know themselves? Kids develop a sense of their gender identity by the time they are three- to five-years-old! Another good read is here.)

Other thoughts:
– 30A ETS [Alleged Area 51 specimens, briefly] was all too timely a clue!
– This puzzle also felt relatively modern with fill like DEETS, BATMAN, and FIREFOX, even if most of the pop culture references were from decades ago.
– Men vs. women referenced in this puzzle? ADAM, UNCLE SAM, BATMAN, STEVEN Tyler, Lenin, TROTSKY, OREL Hershiser, ERTE, BOYS, SAL Mineo, Noah, vs. MADAMS and Sophia LOREN. 11 vs. 2. : / (And no other genders represented, that we know about.) It’s odd because entries like RAGGEDY could easily be clued via Raggedy Ann, etc.