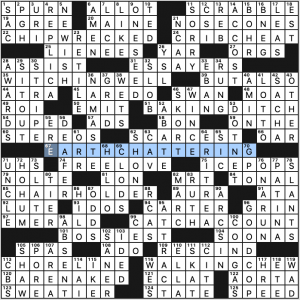 Mostly pretty good theme-wise, I’d say. Some worked better than others, but on the whole, a positive experience.

The fill, also, had some hits and misses.

So that’s more turn-offs than I’d like to see even though the theme worked and there are some really nice high points in the fill. I’m of the opinion that a smoother grid is preferable, even at the cost of flashier fill. 3.2 stars. 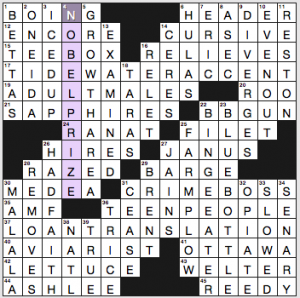 This bonkers grid has 58 words, meaning there are only six answers in the 3- to 4-letter range, and more than half the entries have 6+ letters. Typically a low-word-count grid is marred by questionable fill—words that are woefully obscure, words with dull prefixes and word endings tacked on (this latter category is what I call “roll your own” words—I’d include RELET except that’s more like junk crosswordese we see too often). Byron has managed to have very little junk in the puzzle, however. 1a starts things off right with a bouncy BOING and progresses through all sorts of other solid to lively fill.

I like the seasonal fake-out of 1a. [Spring report], BOING and 6a. [Bad fall], HEADER. A coil spring, not April, and a tumble, not autumn. 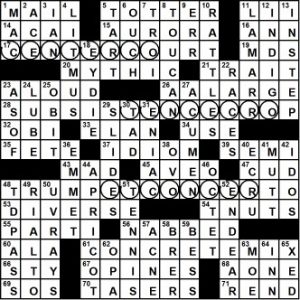 THEME: The letters of the word concrete are arranged differently in three long phrases that are followed by the reveal,

61a Foundation foundation? … or a hint to the starred entries’ circled letters CONCRETE MIX. In the print version, the parenthetical refers to “the starred entries’ indicated letters”; the theme clues say “see letters 1-8,” etc.; there are no circles. I give editor David Steinberg credit for his creative work-arounds. However, a vocal group of solvers in this locale treat clue parentheticals, lack of circles, and other aberrations from the straight-and-narrow with resentment and hostility. They don’t like answers that jump over blocks, anagrams, scrambled letters or, words that are spelled backwards. They view the local paper’s alternative to the New York Times  as their accessible puzzle. For years it was the Tribune Media commuter puzzle, edited by Wayne Robert Williams. When that series bit the dust in 2008 due to TMS’s bankruptcy, this solving group totally rebelled against the Los Angeles Times’ puzzle, which was unceremoniously inserted into the paper as a replacement for what they were accustomed to. A great many solvers hit the Thursday Wall and complained. The compromise reached by the paper to appease this group was the Universal Crossword, edited by Timothy Parker–known at the time for being editor of USA Today’s crossword and the primary consultant for Merv Griffin’s crossw0rd-based TV game show. It was not a great puzzle, and we know now the fate that awaited Parker. Enough on this thread for now.

I Googled the last of the three. Looks like concerto can follow any instrument and, arguably, be an acceptable phrase.

“Hard Scramble” made me think eggs were involved. Or that “Hardscrabble” was intended. Hardscrabble means non-arable, as soil. A hardscrabble golf course can feel like concrete! But hard scramble? Without a d on the end?

I’ve heard scrambled hard from people ordering eggs. I’ve heard hard scrambled eggs. And I may have seen hard-scrambled. But take away that d at the end and … not so much. A Google search for hard scramble gets a respectable number of hits, but some early ones refer expressly to hard scrambled eggs–with the d. One refers to a book, The Hard-Scrabble [sic] of Elm Island. Another is a blog post referring to the “Hard Scramble Method” of cooking eggs (I’d argue the writer is making up an adjective, needs a hyphen … and erred in omitting the d). 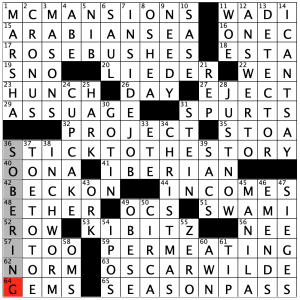 Quick time today. Lots of stuff to like, and that’s what it’s all about! I’ll keep this short since I am posting this a little late. A solid 4.4 stars today.

Some of what I liked:

Ran a 5k this morning! Enjoy your weekend! 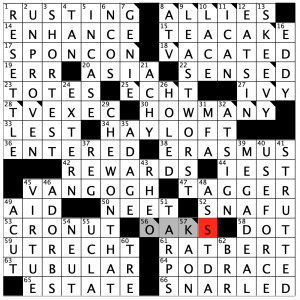 Definitely a Stumper this week. Well over 20 minutes for me. Some of this stuff I just did not know. But I am not feeling the total frustration, even anger, anymore, so that is a good sign. Got a toehold in the SW section first, and had to dead ends toward the final stages at 56A and 7D, which I will mention below. Great puzzle overall, though. I would still love to meet Matthew someday. If he is at Boswords, tell him I said hi! 4.6 stars for this one.