Today’s NYT is the brainchild of the Fiend’s own Erik “Slicks” Agard. I love Erik’s puzzles, and this one is no exception. The theme is “double words that start with B and have different vowel sounds.” I’m sure there’s a technical term for that. 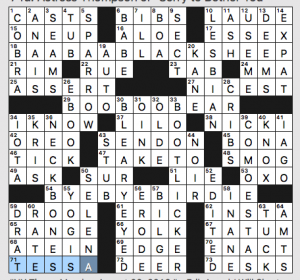 One of the keys to a good Monday puzzle is being choosy with your theme material. Three answers is plenty here, and they’re all solid. A strong, accessible, satisfying Monday theme.

What I didn’t know before I did this puzzle: never heard of Jayson TATUM or TESSA Thompson. 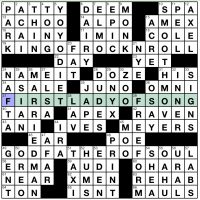 This was a lovely, quick, smooth puzzle with a tight theme. It’s cool that each of these nicknames is 15 letters long (even if the ‘N in the first themer is a bit of a shortcut) – great find, especially given the diverse representation across the three artists highlighted in the theme entries.

Other thoughts:
– I enjoyed seeing fill like YOYODIET and XMEN, and how cool for such a cleanly filled Monday puzzle to only be a Q and W away from being a pangram.
– Let’s look at the gender balance in this puzzle. We have Elvis Presley, James Brown, Jupiter, ANI, IVES, Seth MEYERS, POE, ELMO, Lawrence of Arabia, MONK, Bill NYE, MARRIEDMAN, Fellas / DUDES, Fellow / GENT, and SHEA. 15 entries for the men (counting Fellas / DUDES as one, to be generous) vs. only 5 women – Ella Fitzgerald, JUNO (only clued in her role as a wife), Scarlett OHARA (x2!), ERMA Bombeck, ELSA – or 6 if you count Scarlett twice. At least clue PATTY as a woman to get the ratio closer, right?

MATCH MAKERS [Facilitators of love connections, and a hint to the first words of 17-, 28- and 47-Across] is our indication that the other themers start with the parts of a tennis match. 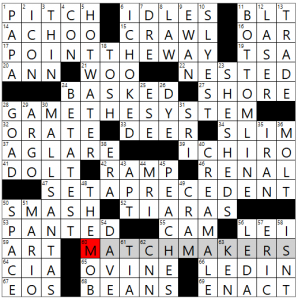 It seems weird having a set of themers that creates the term “Point, Game, and Set” when the phrase we all know is “Game, Set, and Match.” But I guess the theme is simply after the components of a match and has nothing to do with the phrase. Still, it’s distracting. And coupled with the nits I noted above, my initial feeling was that this felt a little off.

But I’ve come around a bit and think I was viewing this too harshly. I’m okay with the “A” in SET A PRECEDENT, and I’m okay with the overall theme structure, so if POINT THE WAY could have been clued a bit differently or replaced with something more idiomatically common (POINT OF VIEW fits), then I would be satisfied.

Moving on to the fill, we find a load of good stuff: HOT WATER (clued as a metaphor for trouble), BOTTOM LINE, “I CHOKED,” MALL SANTAS, BETA TEST, CREAM ALE, PEACHES, THE MOB, and the fun and modern SHE SHEDS.

Everything else checks out as standard: Cleanish short fill and straightforward clues (it is Monday after all).

I don’t know where the idea of SHE SHEDS originated, but I first learned of them from this State Farm commercial, which also gives us the term “she-she-er” (sp?).

And then there’s PEACHES clued rather dully as [Georgia harvest]. More interesting to me is the song by 90s Alt Rock band The Presidents of the United States of America. The apparent message in the video: Eat your PEACHES and you too can fend off a surprise ninja attack.

This is a nice, chewy puzzle to start off the week. I struggled with the SW corner and felt a real sense of accomplishment when I finished it!

I was impressed with myself because I got 1a, [Non-venomous adders?] right away. It’s ABACI. (If it bites you and you die, it’s venomous. If you bite it and you die, it’s poisonous). Pride goeth, etc etc: I needed several crossings to get 1d [The bodily aspect of emotion, to psychologists], AFFECT. No, I’m not a psychologist, but I use the word in pretty much every patient note I write. 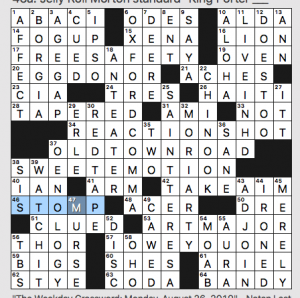 Loved OXFORD COMMA, clued as [Style-guide subject, often]. The clue could have been more fun but the entry is great.

What I didn’t know before I did this puzzle: I’d never heard of the Lil Nas song, and I didn’t know that the FREE SAFETY provided cover to the quarterback.

Found my foothold in the southeast after flailing around the grid for a minute or so. Enough down there to TOUGH IT OUT (not ROUGH IT OUT although A(R)CO looks better than the correct ATCO to me!).

Really liked this one overall.

A touch heavy on names, and maybe a couple of ugly moments, but none worth mentioning. I thoroughly enjoyed the bite this one came with.